The 2U Cubesat was deployed to a low 400km orbit from the International Space Station, alongside other 27 ISS-bound QB50 Cubesats into orbit, deployed by NanoRacks in several batches over a period spanning 16 to 25 May 2017.

The QB50 project is a constellation of 2U Cubesats sponsored by the European Union and managed by the von Karman Institute. Originally intended to consist of 50 Cubesats, the constellation finally selected and deployed 36 satellites, launched in two batches (first 28 Cubesats, second 8 Cubesats). The Cubesats were built by university teams and institutions across 23 countries to gather scientific data in the largely unexplored lower thermosphere.

nSight-1 and ZA-AeroSat (built by CubeSpace of the University of Stellenbosch) are the only South African Cubesats that form part of the QB50 constellation.

The SCS Space nSight1 is a joint investment funded by the SCS Aerospace Group and Pinkmatter Solutions who supplied the ground segment software. The Cubesat was designed, integrated and tested by engineers from the Somerset-based Space Advisory Company and assembled in the clean room of NewSpace Systems, both part of the SCS Aerospace Group. A key part of the mission of the satellite is to demonstrate the newly developed SCS Gecko multispectral imager, as well as the Radiation Mitigation VHDL Coding Technique developed and patented by the Nelson Mandela Metropolitan University. Perhaps, the third success story onboard the Cubesat for the South African space industry is the Attitude Determination and Control System (ADCS) designed and manufactured by CubeSpace, a spin-off of the University of Stellenbosch. 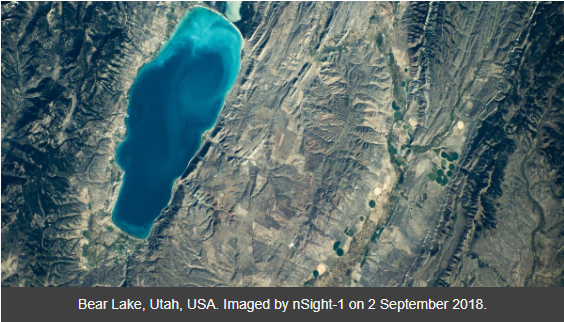 According to an email from SCS Space Advisory Company, nSight-1 has “admirably performed its role as Earth Observation CubeSat, atmospheric science instrument and the vehicle that provided space heritage to our first SCS Gecko imager“.

The newspace company currently estimates nSight-1 to re-enter Earth’s atmosphere at the end of 2019; about 30 months since it was deployed from the ISS. This is well beyond its originally intended 3-month operational lifespan.

Building on the operational and commercial success of the nSight-1 mission and the SCS Gecko imager, SCS/Space Advisory Company developed a series of imaging payloads for the international Cubesat and Microsatellite market. The imaging payload series perfectly suits a range of 2U to 12U Cubesats and other microsatellite components.