The high-level event features over 100 delegates from 29 countries across four continents, including heads of African space agencies and top industry leaders, representatives from the leading commercial space companies, investors, and other key stakeholders in the African space and satellite industry.

The programme began with an opening statement by Temidayo Oniosun, Managing Director of Space in Africa, acknowledging the presence of various dignitaries, including the attendant heads of space agencies, including Dr Zolana Joao, Colonel Hillary Biwott Kipkosgey, Dr Lisho C. Mundia, Dr Halilu Ahmed Shaba, and many more. He noted that the conference was to foster more collaboration among African countries and commercial companies, academia and other stakeholders in the African space industry.

in his welcome address, the Director of Kenya Space Agency, Colonel Hillary Biwott Kipkosgey, welcomed the audience as the head of the KSA and a co-host to the conference. He expressed his gratitude to Space in Africa for organising the conference and attracting attention to Africa’s space ecosystem. The Director also acknowledged the importance of international collaboration and expressed the agency’s willingness to partner and explore areas of mutual benefit to enhance Africa’s space ecosystem. He then welcomed the Cabinet secretary of Defence, Government of Kenya, to the podium to make his opening remarks and officially open the conference.

The Cabinet Secretary of Defence, Government of Kenya, Hon Eugene. L Wamalwa began his speech by thanking Space in Africa and expressed his appreciation for Kenya being selected as the host country for the maiden edition of the conference. In addition, he noted Kenya’s interest in space, dating back to 1964 with the partnership with Italy and the development of the Luigi-Broglio Malindi Space Center. The Cabinet Secretary also noted that more efforts to enhance regional and international collaboration are necessary to ensure that Africa is not left behind in the commercialisation of the space industry. He also hoped that the conference would inspire the creation of new space start-ups and urged the policymakers to make targeted policies to facilitate this development across the continent. The Cabinet Secretary concluded by formally declaring the NewSpace conference open.

Subsequently, Dr Tidianne Ouattara, the African Union Commission Space Science Expert and GMES & Africa Programme Coordinator, delivered the event’s first keynote address. He began by noting that Africa was more than a hotspot for space business, but that Africa was also the el dorado of Space business. In his keynote, he expressed the immense nature of Africa, especially in terms of landmass and population.

Furthermore, Dr Tidianne stated that it was necessary to incorporate space into the heart of Africa’s sustainable development. According to him, space can provide accurate information for important decisions on the continent. Dr Tidianne also noted that it was time for Africa to become more than just consumers of space and reiterated that Africans must be committed to becoming developers and distributors of space services. This, he added, was necessary to improve the local private sector. He also noted the relatively reduced measure of investment and funding in Africa. He admonished that African decision-makers be sensitised to fully grasp the significance of space for Africa’s developmental goals.

Dr Tidianne also discussed the African Space Agency, including its lifecycle, noting that the agency would soon become operational. Likewise, he noted the need for effective communication between local space actors, including the government, as well as incentivising the private space sector as an important way of developing Africa’s space industry. According to him, innovation originates from the private sector.

Shortly after Dr Tidianne’s presentation, organisations also had the opportunity to exhibit their capabilities and experience to a wide range of attendees representing the entire industry value chain.

Temidayo (Space in Africa) served as the moderator for the Heads of space agencies panel.

Furthermore, Dr Joao explained that the AngoSat-2 satellite is fully ready for launch, while the AngoSat-3 development (with Airbus) will start after the launch of the angosat 2.

Colonel Hillary Biwott Kipkosgey of the Kenya Space agency addressed the audience next and discussed the current status of the country’s space ecosystem.

Dr Lisho C. Mundia discussed the importance of multilateral and bilateral agreements with other developed and developing countries. He also noted the country’s effort in leveraging their public universities to establish space capacity. Dr Mundia emphasised that the plan would be realised by collaborating with other space-faring countries across the continent.

Dr Mundia also discussed the difficulty in having the government invest in the local space industry and explained their plans for sensitising the policy and decision-makers in Namibia about the importance of space to the sustainable development of the country. In addition, he discussed the infrastructural challenge and the consequent inability to attract research funding. This, he said, is responsible for the drop in the quality of innovation in the country.

The Director-General of the National Space Research and Development Agency, Dr Halilu Ahmed Shaba, gave a brief overview of the Nigerian space agency and the roadmap to her space mission. He noted that some unachieved projects were not complete failures as they provided avenues for the agency to learn. Furthermore, he explained the capacity development nature of NASRDA’s space projects. According to the DG, this capacity development requirement also interlinks with Nigeria’s war on terrorism as the agency has also extended capacity development schemes to the military. 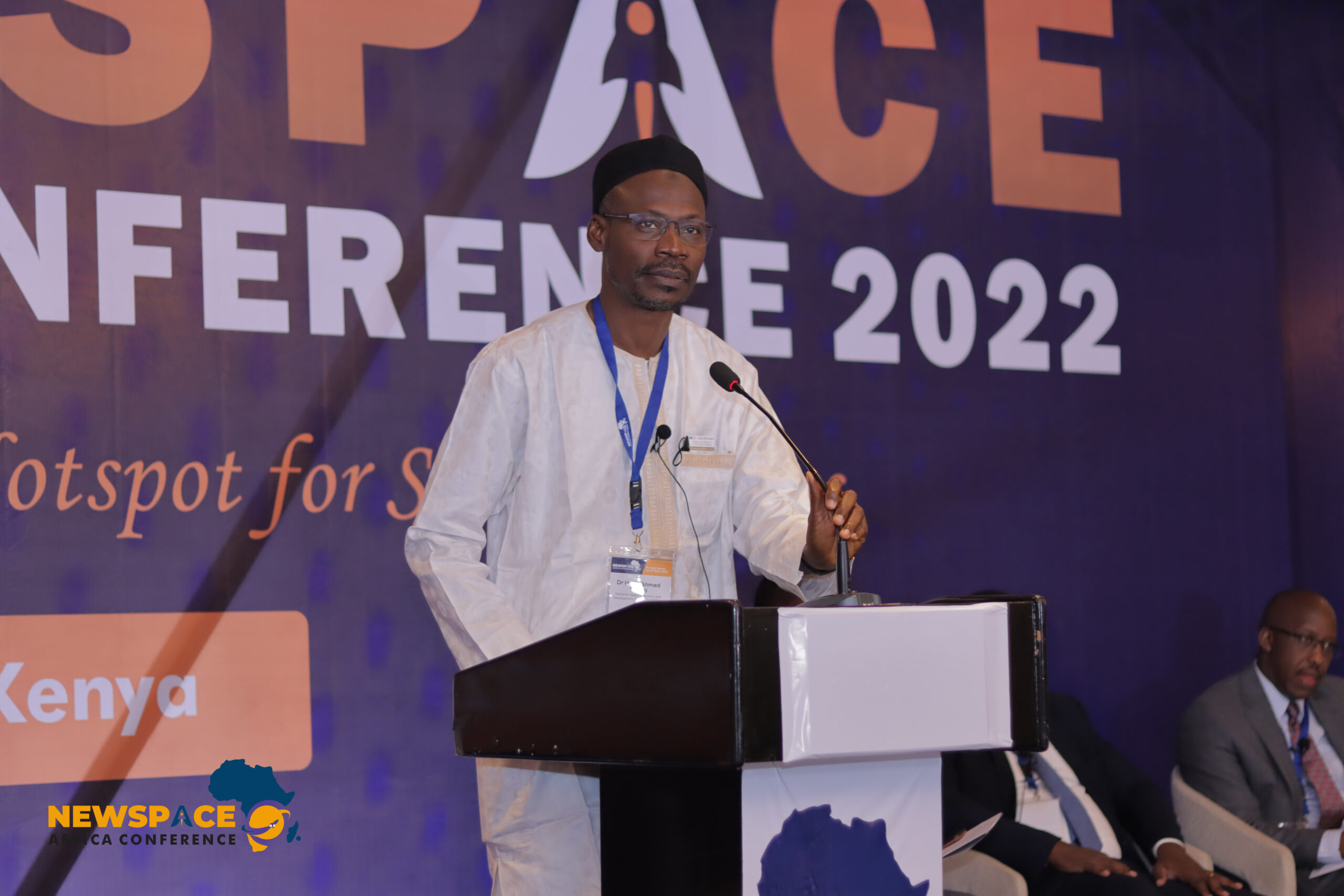 Dr Halilu Ahmed Shaba, Director of National Space Research and Development AgencyDuring the Q&A session, Dr Joao noted that the government had been lagging in stimulating private partnerships. However, he explained that the government was focusing on the downstream segment. Also, on the possibility of developing an African launch capability, Colonel Kipkosgey explained that Kenya currently has no launch infrastructure, but they were discussing with various entities regarding setting up a spaceport.

Also speaking on infrastructure for launching satellites, Dr Halilu explained that Nigeria had launching ambitions and had consequently begun tests in its Centre for Space Transport and Propulsion (CSTP). In addition, Dr Halilu mentioned the need to leverage Nigeria’s proximity to the equator, which will result in a high volume of space launches.

Still, in the Q&A session, regarding the measures that have been put in place to reduce brain drain in the continent, Dr Joao explained that they have been training their engineers to represent Africa better. As a result, when recruiting from universities, they ensure that the students are trained regularly to ensure that they measure up to the industry standard. Regarding the same question, Colonel Kipsogey and Dr Halilu highlighted that their strategy for preventing brain drain included reasonable remuneration for the specialised engineers to improve talent retention.

Leehandi Kearney moderated the second panel session, which focused on the challenges and opportunities attainable within the African Newspace ecosystem.

Mr Barrington-Brown of NewSpace Systems lauded Africa’s development, especially in the NewSpace scene. Likewise, Monique Mely, Founder and CEO of Eureka Geo, opined that several initiatives with companies launching their activities, especially in EO, have played a significant role in shaping the NewSpace industry. According to her, innovation is necessary for the industry to ensure that its participants can leverage all the opportunities abound in Africa’s Newspace ecosystem.

Similarly, Mike-Alec Kearney, CEO of Cubespace Satellite Systems, discussed that Africans have the opportunity to shape our ecosystem because of the present developmental phase within the industry. He also explained the importance of government investment in space, especially in generating funds for building a sustainable ecosystem. According to him, “in principle, Newspace is about building satellites that are profitable. But, to do that, manufacturing has to be efficient – less building cost has resulted in a reduction in the size of space systems. This, he mentioned, has helped to ensure that space is democratised on the continent.

The co-founder of Hepta Analytics, Sylvia Makario,  moderated this panel session where panellists discussed at great length the opportunities and lessons learned from the investment and funding landscape within the NewSpace ecosystem.

A consultant at the Research Institute for Innovation and Sustainability (RIIS), Louis Moussi, kickstarted the session by describing space as capital intensive with resulting barriers to entry such as funding. According to him, this barrier led RIIS institute to run the African EO challenge, which focuses on applying EO data to solve socio-economic challenges in Africa.

According to Prof. Sias Mostert, Chairman, SCS Aerospace Group, one of the best places to start a newspace startup in Africa is in academia. However, he further explained that it is difficult to convince banks, equity investors, venture capitalists and other financial institutions to provide funding because it is challenging to prove to project’s viability due to several uncertainties that are associated with space systems development.

In addition, Tsendai Chagwedera, Principal at EchoVCLouis explained that getting access to funding as a space company requires the government to create the proper incentive and an enabling framework (legal, regulatory and financial) for space ecosystem development. Sometimes, for startups, he said, the problem is around the business side of the startup and not the technical part. To this end, he explained that there must be synergy between all actors in the African space ecosystem.

The acting director, space sector & technology development at KSA, Charles Mwangi, moderated the last panel session for the day that focused on addressing the talent gap within the African space industry.

Dr Taiwo Tejumola, an assistant Professor of Space Systems Engineering at the International Space University, discussed that Africa has several similar developmental needs that could be tackled collectively. To this end, he noted that infrastructure development for training and research must be expanded across all fronts if Africa fully realises the socio-economic benefits of space technology. He also emphasised the importance of matching talents from different spheres of study to ensure a suitable talent pipeline.

Professor Paul Baki, professor of Physics & Consultant Space Scientist, Technical University of Kenya, also explained Africa’s agenda for 2063 with goals and aspirations related to economic growth. He also mentioned that African states need to audit and assess space technologies and effectively link that to the right human resource required to actualise these goals. Furthermore, Prof Baki discussed a need to invest in capacity development and exchange programmes in every space-related programme to establish a sustainable talent pipeline to meet future skills needs.

Prof. Robert van Zyl, Managing Director, AAC Space Africa, opined that laying a foundation for the continent’s current and future workforce requires a deliberate policy approach, private sector commitment and institutional reforms. He also noted that it is vital for all sectors to invest in building skills, not just for today, but to establish a sustainable human resource to meet future skills needs. Furthermore, Prof Robert discussed that continent-wide access to research funding opportunities, educational exchange programmes, well-equipped laboratories and teaching facilities would help to improve the talent gap in the African space industry.