Earth observation is the process of acquiring detailed information about the physical, chemical, and biological systems of the planet. Earth Observation occurs through the application of remote-sensing technologies, supplemented by Earth-surveying techniques, which encompass the collection, analysis, and presentation of data. In other words, Earth Observation is the collection of data from Earth-observing satellites. Earth observation data provides a powerful tool for the monitoring of natural and human-induced processes, such as biogeochemical cycles, land cover changes, climatic variability and climate change.

According to the Committee On Earth Observation Satellites (CEOS), an improved understanding of the Earth System; its weather, climate, oceans, land, geology, natural resources, ecosystems, and natural and human-induced hazards, is vital if we are to predict better, adapt, and mitigate the expected global changes and their impacts on human civilization.

Changes observed in the Earth’s climate since the beginning of the 20th century are fundamentally driven by human activities, notably the burning of fossil fuels, which increases heat-trapping greenhouse gas levels in the Earth’s atmosphere, raising the Earth’s average surface temperature. Natural processes also contribute to climate change, including internal variability (e.g., cyclical ocean patterns like El Niño, the North Atlantic Oscillation and the Pacific Decadal Oscillation) and external forces  (e.g., volcanic activities and changes in the Sun’s energy output). With climate change biting harder than ever, it is imperative to pay attention to the health of the Earth.

Why Talking About Earth Observation is Important

We live on a planet characterized by limited resources and a fragile ecosystem. The Earth’s environment and climate are determined not only by complex relationships between the various elements such as the atmosphere, the oceans, the glaciers and the land but also by the ever-increasing ability of humanity to impact on them. Primarily, our survival on Earth hinges on having a thorough knowledge about our planet so that we can focus on optimization by carefully managing our resources, and understanding the complexities that make up our ecosystem.

It has also become more critical due to the dramatic impact that modern human civilization is having on the world and the need to minimize adverse effects (e.g. geo=hazards), along with the opportunities such observation provides to improve social and economic well-being.

The Roles and Duties of Different Organizations

Among the 34-member agencies comprising the Committee of Earth Observation Satellites, only two African countries have representatives, which are the National Space Research & Development Agency of Nigeria (NASRDA) and the South African National Space Agency (SANSA) who joined in 2004 and 2010 respectively. Associate members include the Gabonese Agency for Space Studies and Observations (AGEOS), the South African Council for Scientific and Industrial Research/Satellite Applications Center (CSIR/SAC), and the United Nations Environment Programme (UNEP), Kenya.

Another notable Organization is the Group on Earth Observation (GEO). Africa currently has a total of 29 members belonging to the Group on Earth Observation (GEO) and African members are collectively referred to as AfriGEO. Also, several organizations are participating members,  which include the African Association of Remote Sensing for the Environment (AARSE), African Climate Change Research Centre (ACCREC), African Centre of Meteorological Application for Development (ACMAD) and the Economic Community of West African States Commission (ECOWAS Commission) —which has just joined. 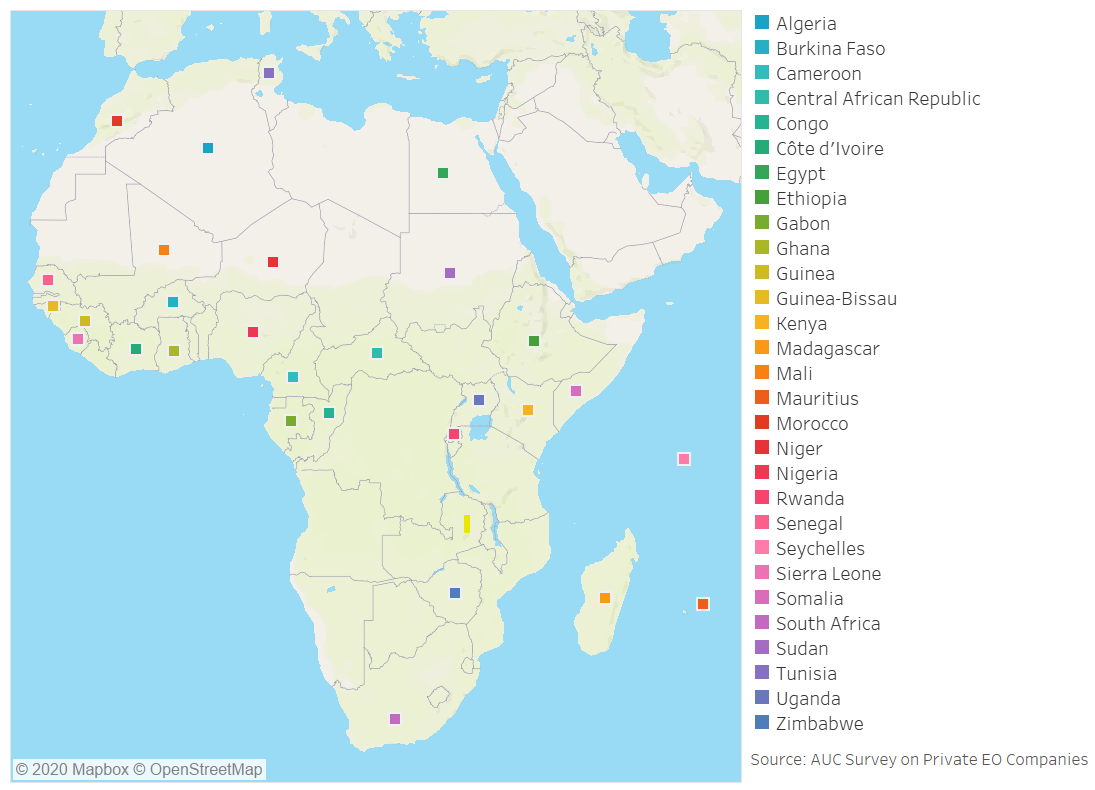 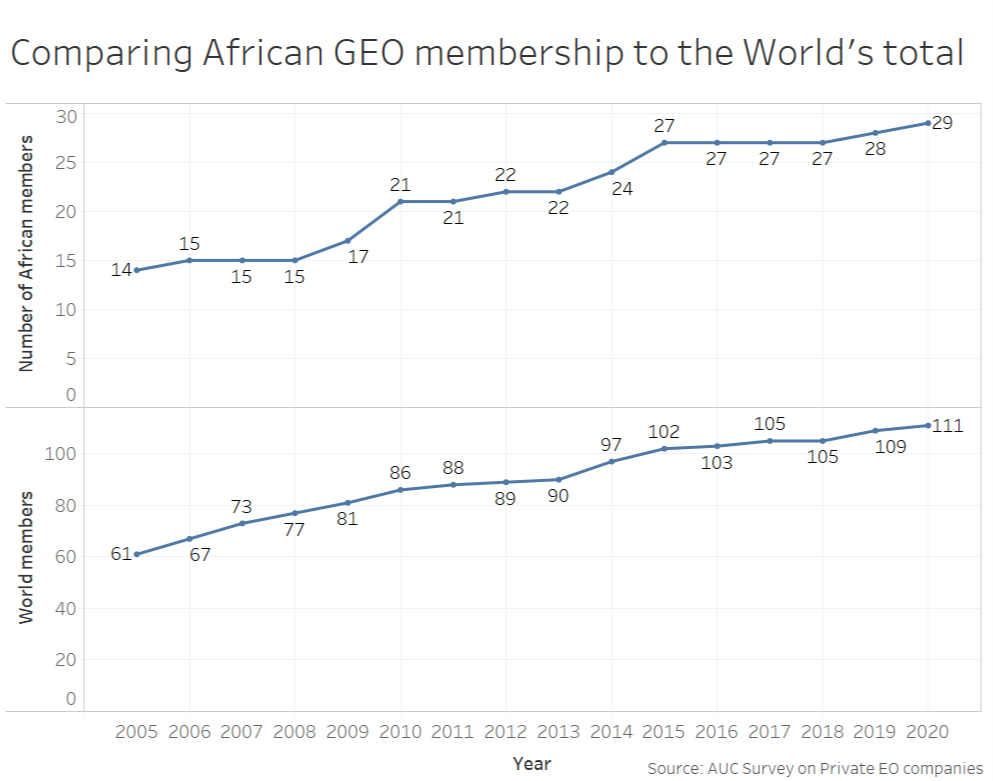 The vision of AfriGEO is to build a continent where decisions on policy and implementation programs, involving the production, management and use of Earth observation, are taken with the involvement of all stakeholders, through a coordination framework enabling the linkage: country-region-continent.

AfriGEO aims to provide the necessary framework for African countries and organizations as well as international partners to access and leverage on-going local and international bilateral and multilateral EO-based initiatives across Africa, thereby creating synergies and minimizing duplication for the benefit of the continent.

The overall objectives of AfriGEO include coordination, participating and contributing to GEO and GEOSS (Global Earth Observation System of Systems) respectively, knowledge sharing and strategy implementation.

The Role of Institutions

In December 2019, GEO released a list of 21 projects being facilitated by 17 developing countries that will be awarded $1.5 million worth of cloud services, grants and technical support through the Earth Observation Cloud Credits Programme. Eight African institutions from seven countries were selected. 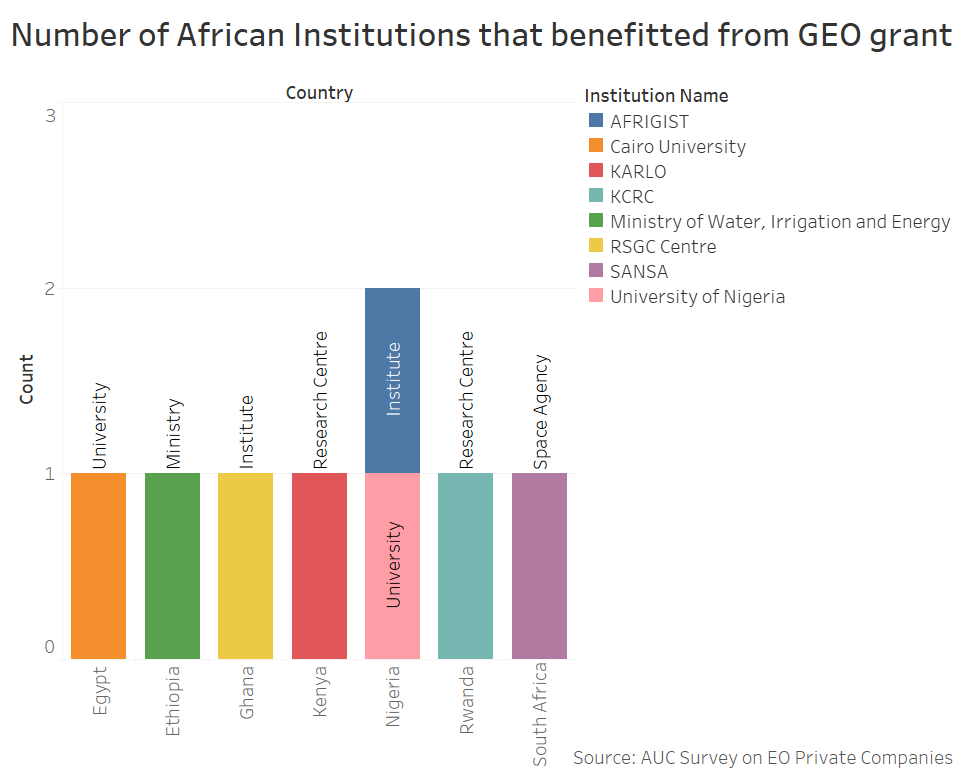 The selected projects will focus on solving development challenges, ranging from environmental monitoring to improving agricultural yield and managing natural resources. All the awarded projects are contributing to activities of the GEO Work Programme, and in particular, GEO’s three engagement priorities: the Sendai Framework for Disaster Risk Reduction, the Paris Agreement for Climate, and the United Nations 2030 Agenda for Sustainable Development.

One of the most important ongoing EO programmes in Africa is the GMES & Africa program, through which 45 African countries are implementing EO projects. The Global Monitoring for Environment and Security and Africa (GMES & Africa) Support Programme is the result of the long-standing cooperation between Africa and Europe in the area of space science & technology, which is one of the key priorities of the long-term EU-Africa Joint Strategy. The GMES & Africa Support Programme is administered by the African Union Commission through the Human Resource, Science and Technology (HRST) Department of the Commission.

The pan-African programme aims at improving the capacity of African policy-makers, planners, scientists, businessmen and private citizens to design, implement, and monitor national, regional and continental policies, and to promote sustainable management of natural resources through the use of earth observation data and derived information. The African space industry is mostly focused on solving socio-economic challenges with space technologies, and the EO sector is at the centre of this.