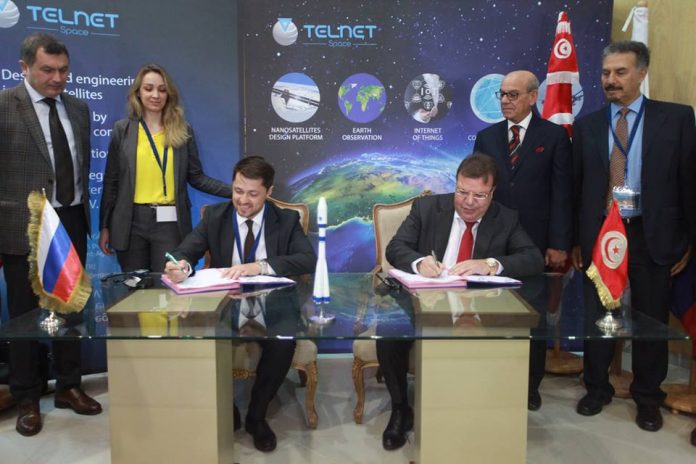 Tunisian aerospace and telecommunications company, TELNET Holding, has signed a tripartite deal with two Russian companies, SPUTNIX and GK Launch Services, to launch a constellation of 30 satellites by 2023 for the development of a network of IoT applications.

As part of the deal, TELNET will collaborate with SPUTNIX for the development of the satellites and the establishment of R & D services for satellite components and bespoke telecommunications solutions. The parties plan to deploy laboratories and test facilities in Tunisia for the development of micro-satellite components and IoT technologies, as well as facilitate the training of Tunisian engineers and academics in satellite engineering.

In April 2019, TELNET announced the company’s plan to launch a precursor satellite named “Challenge ONE” in collaboration with its Russian partners. The satellite is expected to be launched by GK Launch Services on the Soyuz-2 rocket in September 2020, as a precursor mission to the constellation of 30 satellites which will be launched by 2023.

Commenting on the deal, CEO of TELNET Holding, Mohamed Frikha, said: “The joint efforts of TELNET Holding, SPUTNIX and GK Launch Services will not only contribute to the creation of new space technologies and telecommunication solutions to meet the needs of the global market but will also lay the groundwork for the development of the space industry in Tunisia.

“We believe that this project and this cooperation offer great prospects. The Internet of Things is developing very rapidly around the world and SPUTNIX is ready to participate in the construction and development of the IoT space segment”, said Vladislav Ivanenko, Managing Director of SPUTNIX.

Beyond building and launching satellites, the partnership also plans to organize training programmes for technology companies, academic institutions, researchers and engineering students in Tunisia to acquire practical knowledge in advanced satellite and telecommunications engineering. Experts from SPUTNIX and GK Launch Services as well as professors from Russian universities will collaborate with TELNET and Tunisia institutions to deploy the capacity building component of the deal.

“We have taken another important step in developing our relationships. It is not just the relationship between GK Launch Services and TELNET Holding, but also the relationship between Russia and Tunisia in the field of space, which we hope will be further developed. The planned launches will be based on a Soyuz-2 launcher configuration with the Fregat upper stage, to ensure high accuracy of orbital constellation deployment”, said Alexander Serkin, Managing Director of GK Launch Services.

TELNET Holding was founded in 1994  and has evolved over the years to expand its expertise in research and development in product engineering, electronic and mechanical engineering across several fields such as telecommunications, multimedia, energy, electronics and aerospace. The Group recently ventured into satellite communication with the creation of a new aerospace centre in Sfax Aerospace Valley in Tunisia – a partnership between TELNET, the Toulouse Aerospace Valley (France) and the Sfax Technopark.

Although the parties did not disclose the value of the satellite project, one could estimate the satellite and training projects to cost hundreds of millions of dollars. Mohamed Frikha is confident the partnership will help drive the Group’s revenue in the near future. TELNET reported consolidated revenue of 40 million dinars (approximately USD 14 million) for the 2018 fiscal year.