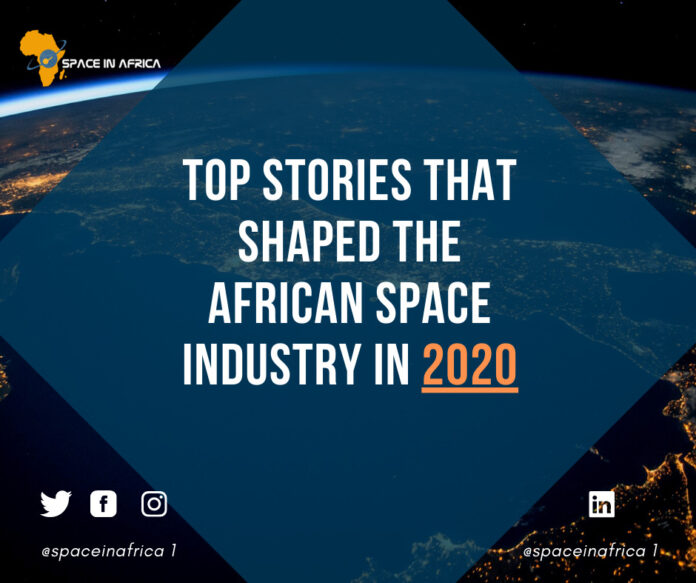 As at the time of publishing this update, no African country has launched a satellite in 2020. Although countries like Nigeria, Egypt, Angola, Ethiopia and Tunisia announced satellite projects, launch dates of these projects are fixed for the future. Tunisia’s Challenge ONE satellite will now launch in March 2021. Nigeria’s space agency, NASRDA also announced that it would start constructing two new satellites in 2021. Ethiopia initially promised to launch a satellite in October but has since postponed it, promising to launch on December 20.

Angola’s AngoSat-2 satellite has also been announced for a scheduled March 2022 launch date, while Russia has equally modified its GLONASS tracking station in Angola while planning to build additional stations across Africa. Egypt, one of Africa’s leading space countries have also announced that they’ll be launching an Earth Observation satellite in 2022, while Egypt’s publicly traded company, NileSat, signed an agreement with SpaceX to build and launch NileSat-301 in 2022.

In Burkina Faso, a ground station was unveiled earlier in the year, as the country begins the construction of its first satellite, an Earth Observation nanosatellite to be launched at a yet-to-be-disclosed date. Nigeria’s NIGCOMSAT is providing Africa’s first early SBAS open service, while SARAO’s SKA completes final reviews ahead of construction. EUTELSAT launched KONNECT communications satellite, which will serve 40 African countries and Belgium and SES also announced a partnership for satellite connectivity which will cover 20 African countries.

Towards promoting its space endeavours, South Africa announced a USD266 million funding for a space hub, which is promising six satellites in the next four years. Like South Africa, EgSA is set to establish space centres around the country.

Despite the effect of the COVID-19 pandemic, our Space in Africa Industry Report 2020 has uncovered that Africa spent more (USD490 million) on Space Agency management in 2020 than in any other year. The report also reflected on rising policy development across the continent, increasing government involvement in the space industry, growing Newspace sector, how space technology is helping to achieve Sustainable Development Goals (SDGs), and rising participation of foreign partners in the industry.

In 2019, Rwanda launched their first satellite, before joining the fundraising round for OneWeb in March 2020, towards enhancing Rwanda’s satellite capacity. Unfortunately, OneWeb soon declared bankruptcy. Space in Africa analysed the details of the investment, the amount invested and the outcome for Rwanda. Despite the disappointment with OneWeb, Rwanda also worked on draft legislation to establish its Space Agency.

Meanwhile, the impact of the pandemic was cushioned by countries differently, as Nigeria increased its space budget, while South Africa cut its own. As Egypt continues to debate its budget for 2021, the CEO of the Agency, Dr Mohamed Al-Quosy, has had his tenure extended by the Egyptian President. Egypt signed partnerships involving UNISEC-Japan, Kazakhstan and Ukraine. Egypt also entered a USD9.8 billion Arms deal with Italy. Partnerships were equally signed at SANSA, as the agency signed MoU with Brazil, NASA and the European Space Agency.

In a similar light, Kenya announced its Strategic Plan (2020-2025), ushering in partnership talks with Ukraine, USA and Russia, as the agency initiated plans to select its next Director. Kenya also signed an agreement with Italy for the use of Kenya’s Space centre, which will allow Kenya to earn Sh25 million annually. The Ethiopian Space Science & Technology Institute (ESSTI) appointed a new director.

In August, Space in Africa announced the top ten under 30 innovators in the industry.  We also analysed a new report that mentioned that the African Private EO and Geospatial Companies Employ Over 3,400 People.

Some professionals in the African space industry shared their thoughts on different projects on the continent. AUC Space expert, Dr Tidiane Ouattara spoke on the progress of the African Space Agency. Prof Melvin Hoare gave insight on the importance of the Development in Africa with Radio Astronomy (DARA) project to the continent while Dr Abimbola Alale talked about Nigeria’s Satellite Communications ambitions. Space leaders also met to discuss the future of Europe-Africa in Space at the European Space conference which was held in Brussels, Belgium.

In a multilateral partnership, Brazil, Russia, India, China and South Africa (BRICS) are working on a developmental breakthrough in quantum communications. South Africa, also during the year, ratified the SKA Observatory Convention.

In the NewSpace sector; NanoAvionics, Dragonfly, Space JLTZ and Partners formed a new International Consortium called HyperActiv. Still in the Newspace, Space in Africa had a conversation with the CEO of Netloxh, a company promising to launch Africa’s first rocket in 2021. We also spoke with NewSpace Systems, an African based ADCS manufacturer; South Africa’s Hypernova, currently developing propulsion systems; Dragonfly Aerospace; Simera Sense; Swift Geospatial; Omarichet, and other Newspace companies on the continent. All Newspace interviews and features can be read here.

As a round-up to activities in the African Space Industry for 2020, Space in Africa is currently conducting a ‘2020 in Review’ interview series with top actors in the Industry across various Institutions, Organisations and Companies in the Industry. This interview series will explore how the different actors were able to navigate through the year 2020, and their projections for the coming year. Stay Tuned!