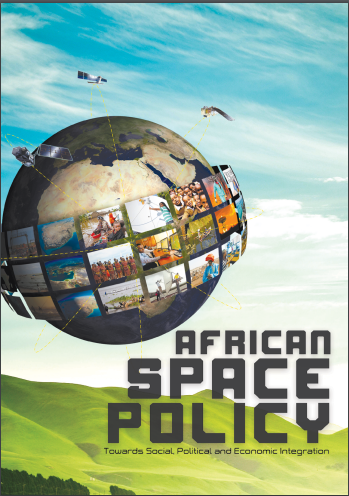 The African Space Agency, which will be located and established in Egypt as decided by the African Union in 2019, is expected to spearhead the continent’s joint space endeavours. As the costs of developing space programs reduce, an increasing number of African States are beginning to consider the viability of space-derived products for sustainable and economic development. Already, 19 countries have national space programmes, and to support the access to and benefit of outer space for all African nations; the African Union introduced the African Space Policy and Strategy.

The African Space Policy and Strategy aim to “create a well-coordinated and integrated African Outer Space Programme that is responsive to the social, economic, political and environmental needs of the continent, as well as its global competitiveness.” It also aims to support the space initiatives of African space programmes by assisting with regulatory frameworks and ensuring that space is used responsibly and for peaceful purposes.  To operationalise the programme, a study done by the African Union Commission (AUC) recommends that regional powerhouses spearhead capacity building in areas such as satellite communications, navigation and positioning, earth observation and space science and astronomy. Most fundamental to the success of the programme is the leveraging of satellite services to support development initiatives through activities such as monitoring of weather conditions, disaster mitigation, as well as boosting Africa’s drought-prone agricultural sector.

A regional power would be one located in a geographically defined region that has considerable influence in the comity of nations in the context of the African space economy. These regional powerhouses possess essential capabilities which are vital to the strengthening of the continental programme. Within the space-faring comity of nations, countries that come to mind are South Africa, Morocco and Nigeria which have each demonstrated a capacity to launch and maintain national satellite and space programs respectively. Regional powerhouses also presuppose the role of institutional frameworks designed to provide specific capacity support to participating States.

The EGNOS Africa Joint Programme Office (JPO) was established through the EU-Africa partnership as an “implementing instrument” to promote and coordinate the Global Navigation Satellite System (GNSS) or European Geostationary Navigation Overlay Service (EGNOS) operations in Africa. The JPO intends to build capacity in the area of Navigation and Positioning. The entity provides support to States aiming to implement Satellite-Based Augmentation Systems (SBAS) and EGNOS applications through studies on GNSS/SBAS; capacity building and coordination of GNSS/EGNOS implementation phases.

Africa has established an ecosystem for the development of Satellite Navigation and Positioning initiatives and programmes which have, as their core aim, capacity building, research and commercial or sectoral projects implementation. EGNOS SBAS service infrastructure has been installed in the following states: Egypt, Tunisia, Morocco, Mauritania and South Africa, which nations are considered powerhouses in advancing the use of Wide Area Differential Positioning Infrastructure to promote the GPS and GNSS goals expressed in the African Space Policy and Strategy. The deployment of these services will also support the pre-existing navigation payload offered by the NigComSat-1R. This satellite belonging to Nigeria provides domestic and international satellite services via a two-way satellite communications platform across West, Central and  South-East Africa, as well as Europe and Asia.

Additional regional institutions, such as the Agency for Aerial Navigation Safety in Africa and Madagascar, the African Geodetic Reference Frame and TRIGNET (a network of global navigation satellite system-based stations in continuous operation) provide a foundation for building on existing satellite and ground segment infrastructure. These regional powers assist in bridging the infrastructural and technological gap of space operations. Making the African Space Policy and Strategy truly optimal would require that community user needs are met by filling system capability gaps within the region. This would entail regional powers availing their systems infrastructure for the benefit of the continental initiative. For example, South Africa’s TRIGNET provides geospatial data for a variety of end-users in the agricultural sector for precision farming.

Regional powerhouses in research and development will also serve to establish technical institutions that will perform research and development activities to support the expansion of the African Space Policy and Strategy. GNSS is increasingly finding prevalence in numerous scientific initiatives in Africa, particularly in the areas of geodesy and space weather. The Horn of Africa, and mainly Ethiopia in this regard, has become a hotbed for a variety of studies relating to tectonic plate movements especially along the Great Rift Valley. The reviews are from the Ethiopian Institute of Geophysics, Space Science and Astronomy (IGSSA) in collaboration with other local and international research institutions.

In addition to these researches, are the establishment of base stations which provide the receiving infrastructure for GNSS data and are instrumental in collecting and collating data for various uses in the AUC’s programme. These base stations are in the Southern and Eastern Africa sub-regions, (Algeria, Central Africa, Egypt, South Africa and a broader Pan-African consortium of 20 member states). As mentioned above, regional institutions are very instrumental in the collection and archiving of data for programme uses. South Africa’s National Geo-Information (NGI) Agency is host to the AFREF Operational Data Centre explicitly designed for such functionality. South Africa is also host to HartRAO, the only International GNSS service IGS GNSS data centre on the continent.

A vital programme point of the African Space Policy and Strategy is to also promote continental connectivity through strengthened telecommunications systems within the region. The AUC will also see to processing and disseminating GNSS derived data from a GNSS CORS Network. The maximum data latency needs to be under one second with a maximum of two seconds. For compliance with this requirement, mobile network infrastructure should at least have the capacity to provide a 2.5G cellular internet connection to allow the end-user to receive the GNSS connection. Within the Africa region, this connection is not guaranteed in all locations, especially in remote areas. The insufficiency of 2.5/3G network connectivity is an impediment to the full-scale GNSS CORS implementation and data transmission initiatives prescribed.

In conclusion, the broad aims of the African Space Policy and Strategy intend to leverage the use of GNSS to improve earth observation services for data-driven decision making in the pursuit of attaining socio-economic development for all African countries. Regional powerhouses and institutions provide a strategic link for partnerships aimed at advanced cost and infrastructure sharing that ultimately creates value in the pre-existing GNSS and EGNOS programmes.