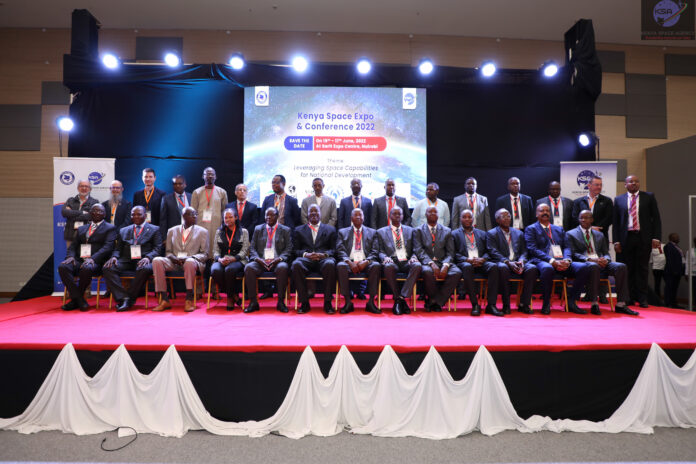 The conference brought together several Agency stakeholders, government representatives, policymakers, academia, representatives of space agencies, international organisations and young professionals in an interactive forum that showcases current projects and innovations and provides an opportunity for linkages and collaboration within the African space ecosystem. 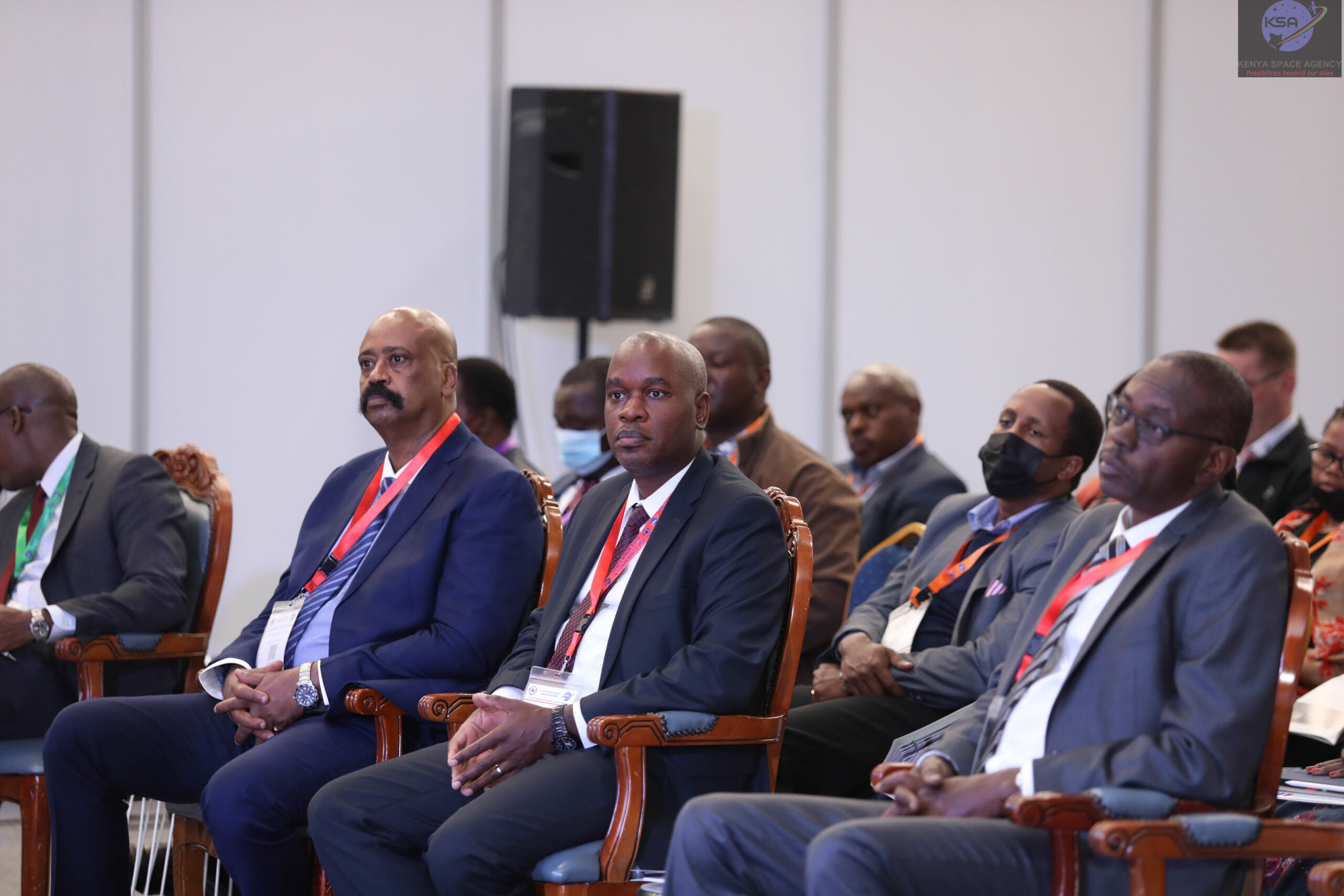 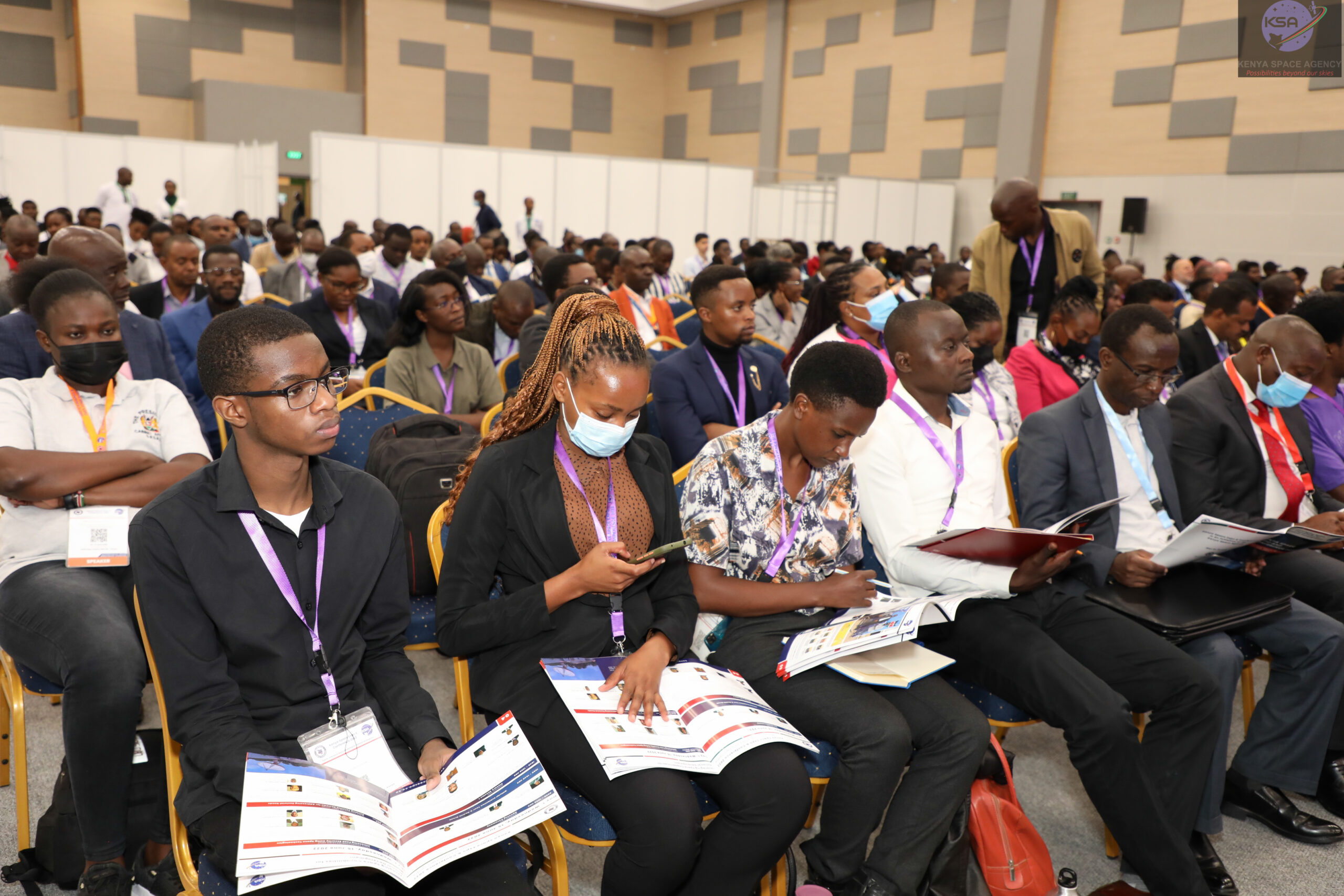 On Wednesday, the conference kicked off with opening addresses by the Director-General of the Kenyan SPace Agency, Colonel Hillary Biwott Kipkosgey; Chairperson of the KSA board, Major General (Rtd) James Aruasa; and the Chief Guest of the event, the Cabinet Secretary of Defence, Government of Kenya, Hon Eugene. L Wamalwa.

Shortly after the opening ceremony, 34 organisations had the opportunity to exhibit their solutions, capabilities and experience to the wide range of participants representing the entire industry value chain. 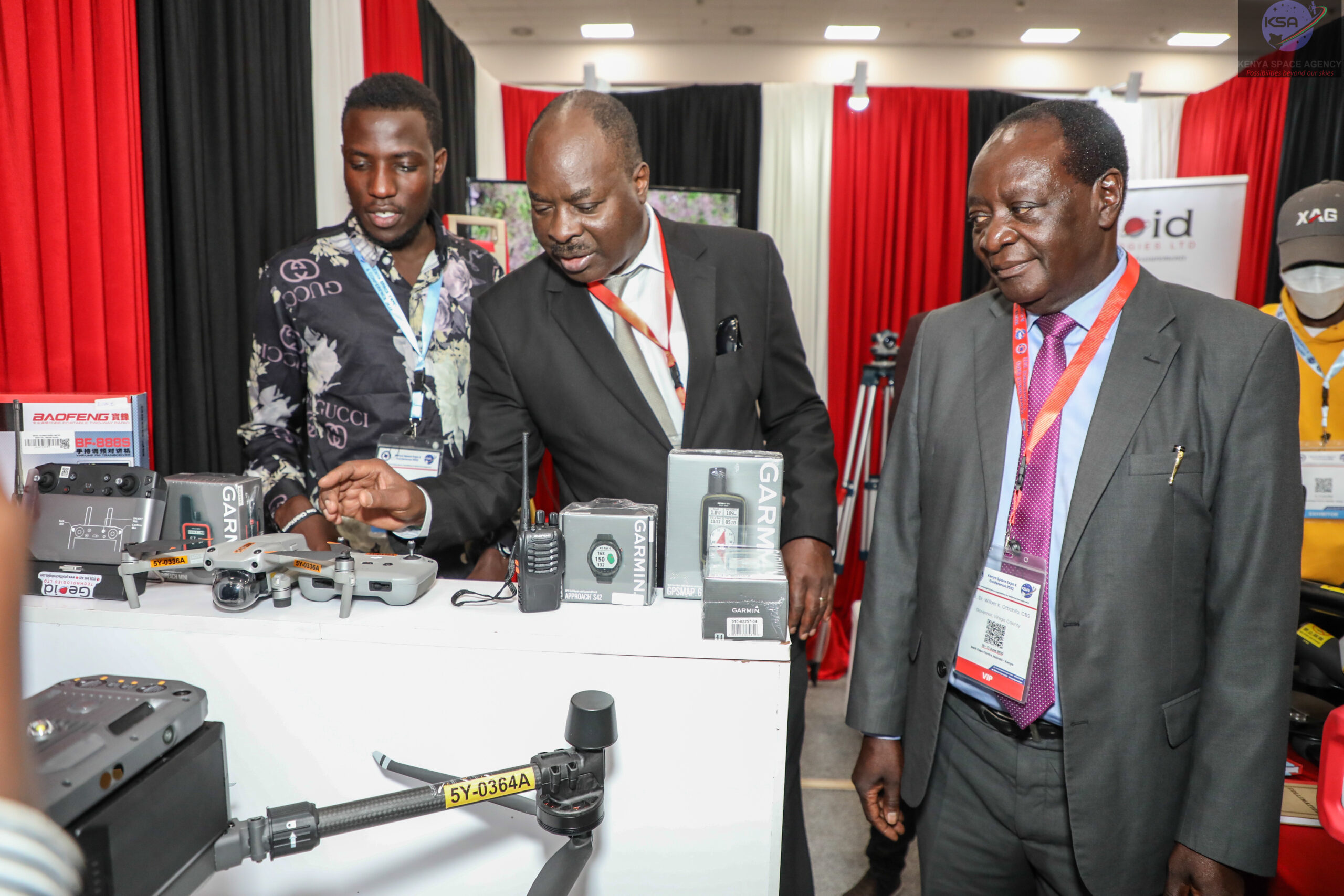 Dr Wilber noted that the County Government Act 2012 necessitated the use and adoption of spatial technologies, recommending that all counties establish a GIS-based database system to provide data for their sustainable development plans. He further explained that his county [Vihiga County] has taken up a leading role in Kenya regarding the County Development Information System (CDIS). Dr Wilber also shared his County’s  implementation of remote sensing and GIS technology for effective planning and decision-making across several industries, including GIS application in Health Management

The panellists discussed the importance of space technologies in developing innovative solutions for several thematic applications across multiple industries/sectors, including agriculture, aviation, environmental monitoring, climate change and telecommunication. Dr Al Qousi, while speaking on the subject, noted that his Agency had developed several projects to create awareness of and improve the understanding of space technologies. “We have developed projects such as Space Keys to educate students in engineering and science departments on satellite development. Similarly, we have the Cansat project, a simplified initiative for students at preparatory and high school levels to demystify space and create more awareness about the importance of space to young students,” said Dr Al Qousi.

On the second day, Charles Mwangi, Research, Education and Outreach Lead at the Kenya Space Agency, showcased some exciting projects currently underway at KSA. Charles explained that the agency’s mandate focuses on promoting, coordinating and regulating space-related activities in the country. Furthermore, he noted that the KSA hopes to achieve its mandates by promoting research and innovations in space science, technology and respective applications and enhancing the country’s space regulatory framework.

He then gave an overview of projects such as the Monitoring for Information and Decisions using Space Technology (MIDST) which helps to improve investigations into the nation’s forest cover, urbanisation and environmental monitoring. In addition, he discussed the agency’s small satellite development and ground infrastructure, including KSA’s partnership with SayariLabs and Endurosat to develop and launch Taifa-1, as well as collaboration with four public universities to develop 3U nanosatellites for Earth observation.

Dr Farah and Willy Simmons discussed extensively the current state of the African space industry, the limitations and challenges and opportunities for developing the space ecosystem.  Speaking about the area of the space sector that Africa should consider a priority area for growth, Davis Cook noted a visible gap between the industry professionals and the next generation that would eventually take the reins in the near future. He then called for more representation of the young professionals advising that each country should prioritise developing the required human capital resources across all industry segments to ensure continuity in the industry’s growth.

The next plenary session focused on the importance of regulatory frameworks in the space ecosystem. The panellist Jared Buogo, Joan Chesoni and Dr Val Munsami shared their views on the subject. Dr Val and Joan Chesoni discussed the importance of international space treaties, noting that being a party to such treaties shows commitment and willingness to peacefully explore space for the continent’s social, economic, political and environmental development. According to the panellist, national regulatory frameworks must also give room for private sector participation by developing and implementing national strategies that create an enabling environment for private companies to thrive in the ecosystem.

During the Q & A session that followed the panel discussion, Anna Aikohi commented on the importance of tax incentives to improve a sector of the industry. According to her, tax incentives are an effective tool by governments to support and encourage innovators, entrepreneurs, businesses, and private citizens to invest locally to boost the country’s economy, owing to how they help reduce the cost of capital for high-risk emerging industries, like the space industry in Africa.

Also, on the sidelines of the conference, Davis Cook and Col Hilary signed a cooperation agreement to collaborate and increase the reach of the Africa Earth Observation (AEO) Challenge to make a genuine Pan-African initiative.

The AEO challenge has been an annual open innovation challenge that sources novel space technologies since 2016. In addition, the challenge aims to drive entrepreneurial activity in the African space industry and promote awareness of the value of Earth observation data (EOD) across the continent and in multiple sectors such as water and food security, mining, logistics, insurance, and many more.

The last day also featured a networking session to foster collaboration among all the attendees. The three-day event was brought to an end following closing remarks by the Kenya Space Agency Board Chairperson, Major General (Rtd) James Aruasa and Chief Administrative Secretary (CAS), Kenya Ministry of Defence, Hon. Peter Odoyo.

Excerpts from the GEO WEEK 2022; GMES & Africa Programme in Focus