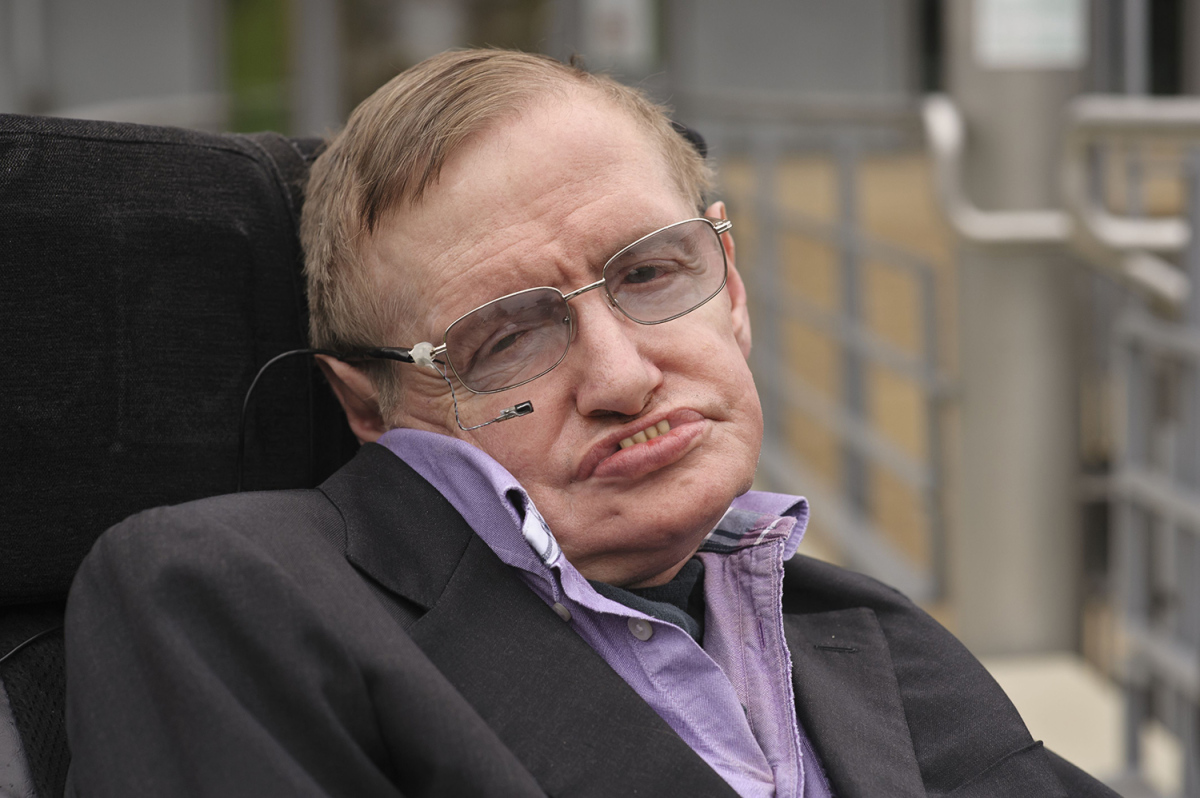 Stephen Hawking is not Wakandan, he is an English theoretical physicist, cosmologist, author, and Director of Research at the Centre for Theoretical Cosmology within the University of Cambridge.

Dude is a scientist. He grew up with his parents, of course, not that he grew with your parents.

Hawking’s was named “Einstein” by his classmates at St. Albans School at age 8 but here is the joker, Hawking’s never made scores above average and was an average student all through his school.

Hawking had a rare early-onset slow-progressing form of motor neuron disease also known as amyotrophic lateral sclerosis that gradually paralyzed him over the decades. Just call it “ALS,” you will sound “scientific.” Even after the loss of his speech, he was still able to communicate through a speech-generating device, initially through use of a hand-held switch, and eventually by using a single cheek muscle. If you don’t understand, neither do I, see image for better explanation. 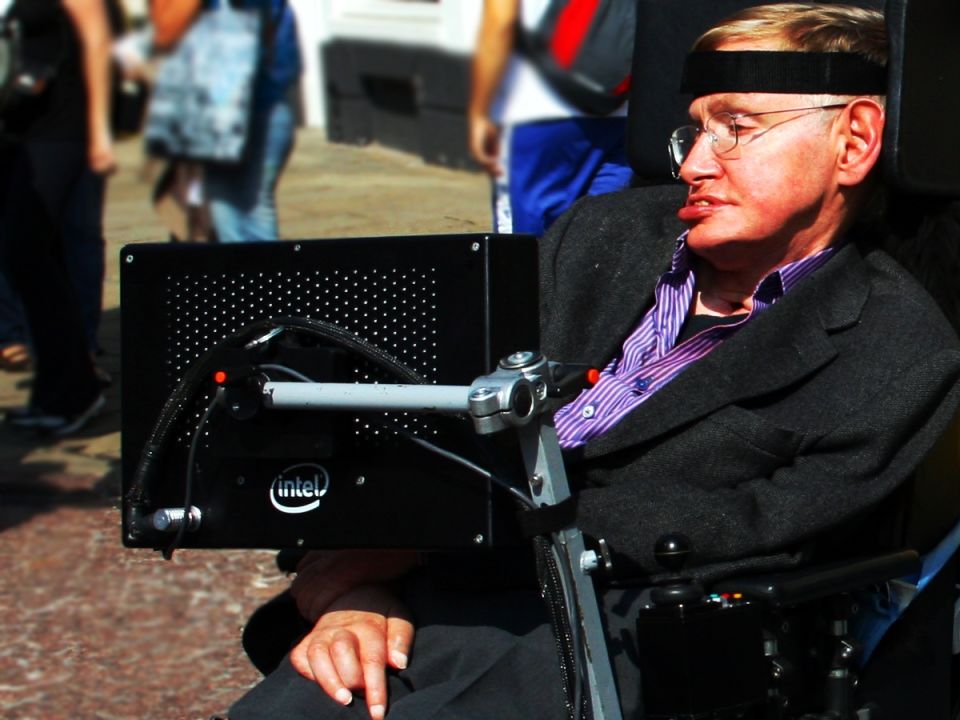 “By losing the finer dexterity of my hands, I was forced to travel through the universe in my mind and try to visualize the ways in which it worked,” he later noted.

While it’s impossible to sum up Hawking’s life in one word, it can be done with one equation: 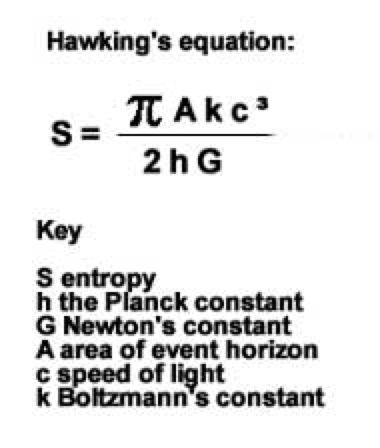 This formula, which involves the speed of light (c), Newton’s constant (G) and other symbols that make the non-mathematically inclined run for cover, measures emissions from black holes that today is known as Hawking radiation. If you think you don’t understand any of it, skip this line and unto the next one but it simply means he has an “equation,” like mathematical equation to his name. I can’t solve it, don’t feel bad. You are not alone. If you can, don’t say it please.

Although the doomsday predictions of his early doctors were off, Hawking did almost die after contracting pneumonia while traveling to Geneva in 1985. While he was unconscious and hooked up to a ventilator, the option of removing the fragile scientist from life support was being considered until his then-wife, Jane, rejected the idea. Hawking instead underwent a tracheotomy, an operation that helped him breathe but permanently took away his ability to speak, prompting the creation of his famous speech synthesizer. You understand it ba?

Hawking’s original synthesizer was created by a California-based company called Words Plus, which ran a speech program called Equalizer on an Apple II computer. Adapted to a portable system that could be mounted on a wheelchair, the program enabled Hawking to “speak” by using a hand clicker to choose words on a screen. After he eventually lost use of his hands, Hawking had an infrared switch mounted on his glasses that generated words by detecting cheek movement. He also had the communication technology overhauled by Intel, though he insisted on retaining the same robotic voice with its distinctly non-British accent he’d been using for three decades, as he considered it an indelible part of his identity. If you have no idea of what this machine looks like or how it works, watch his TEDtalk here and get a feel of it.

Hawking long believed he could write a book about the mysteries of the universe that would connect with the public, a task that seemed all but impossible after he lost the abilities to write and speak. However, he painstakingly pressed forward with his speech synthesizer, receiving valuable assistance from students who relayed draft revisions with his editor in the U.S. via speakerphone. Hawking’s vision ultimately was realized, as “A Brief History of Time” was published in 1988, and it went on to spend a record 237 weeks on the U.K.’s Sunday Times best-sellers list. It was also a New York Times best-seller. The book was translated into more than 40 languages and has sold at least 10 million copies since its initial publication.

It also apparently convinced him that writing a book was no more difficult than breezing through the Sunday funnies, as he went on to pen his biography, several other books about his field and a series of science-themed novels, co-written with his daughter, Lucy.

…and I am yet to finish a book for over five today!

Despite his extraordinary physical challenges, Hawking wasn’t shy about appearing on television. He first appeared as himself on a 1993 episode of Star Trek: The Next Generation, cracking jokes while playing poker with Albert Einstein and Isaac Newton. He also lent his voice to the animated shows The Simpsons and Futurama, and, fittingly, surfaced on the hit sitcom The Big Bang Theory. Of course, screen time wasn’t only about laughs for the world-renowned physicist, who returned to his bread-and-butter topics of cosmology and the origins of life for his six-part 1997 miniseries Stephen Hawking’s Universe. He also provided plenty of stark, sobering descriptions of his life for the 2013 documentary Hawking. Use the Google Search if you are still confuse! Just saying!

Hawking is as much a celebrity as he is a scientist, having appeared on The Simpsons, Futurama, Star Trek and having provided narration for a British Telecom commercial that was later sampled on a Pink Floyd album. He first appeared as himself on TV in 1993 – in Star Trek: The Next Generation – making jokes while playing poker with Albert Einstein and Isaac Newton. He also appeared on The Big Bang Theory.

Hawking was not your Church member neither was he an Mohamed follower.

We are each free to believe what we want and it is my view that the simplest explanation is there is no God. No one created the universe and no one directs our fate. This leads me to a profound realization. There is probably no heaven, and no afterlife either. We have this one life to appreciate the grand design of the universe, and for that, I am extremely grateful.

Hawking is an atheist. He does not believe in the existence of any God. In an interview with El Mundo, he commented:

Before we understand science, it is natural to believe that God created the universe. But now science offers a more convincing explanation. What I meant by ‘we would know the mind of God’ is, we would know everything that God would know, if there were a God, which there isn’t. I’m an atheist.

Though Hawking had a tremendous sense of humour (does he?), he was a scientist first, and he was concerned that mankind was marching toward its own demise. During the Tencent WE Summit in November 2017, in Beijing, Hawking said that humans would consume enough energy to turn the Earth into a giant ball of fire by the year 2600. The professor believed that it is likely far too late to change course at this point, and humanity’s only chance of survival is to escape planet Earth. I think this explains Elton Musk motivation and drive to colonize Mars. Does it?

Hawking was married and had three children. His first marriage to a language student in 1965 by the name James Wilde was a turning point in his life at a time when he was unsure as to what the point of a degree was if he was to die soon, he said. In February 1990 he left his wife of twenty five years to set up home with one of his nurses, Elaine Mason. The couple married in September 1995 but divorced in 2006.

In 2009 Hawking was awarded the Presidential Medal of Freedom, the highest civilian award in the United States. He was awarded the Companion of Honour in 1989. He also was given many other awards, medals and prizes like Fundamental Physics prize (2013), Copley Medal (2006) and the Wolf Foundation prize (1988). Hawking was the Lucasian Professor of Mathematics at the University of Cambridge for 30 years, taking up the post in 1979 and retiring on 1 October 2009. He is also a Fellow of Gonville and Caius College, Cambridge having held many other academic positions.

Russia To Work With Algeria On The Development Of Space Systems