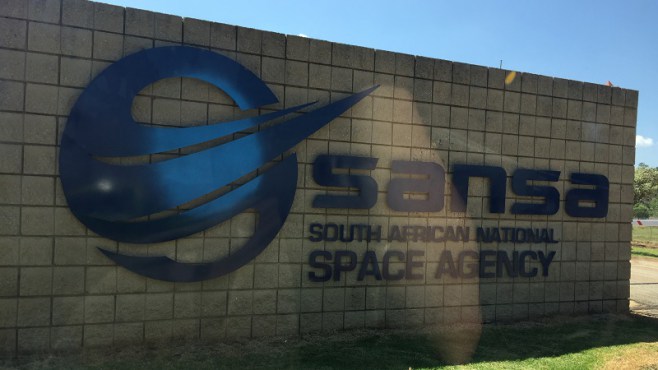 In August 2017, the US-based Space Foundation reported that the worldwide space economy was worth $329-billion in 2016, up from $323-billion in the previous year. The foundation explained that the rise was due to the increase in commercial space activities. In fact, in 2016, commercial space activities accounted for 76% of the global space economy, valued at of $253-billion.

According to the European Space Agency (ESA) on the Sustainable Development Goals agreed on by most of the world’s countries in 2015, the SDGs shows the connection between people and planet has been recognised and the result is 17 goals for land, oceans, waterways, climate, health and so on.

However, the spotlight is on how South Africa can or is leveraging space technology and space systems in social and economic development.

EYE ABOVE THE SKY

The CEO of the South African Space Agency (SANSA), Dr Val Munsami explained that although some of the SGGs cannot be achieved without space, the agency has focused on, and will increase our focus on, space for sustainable development. “Sources of data to monitor progress in meeting the SDGs are a big issue. We know we can make a big impact”, he said.

However, he adds that this will require a reconsideration of the National Space Strategy—which when it was developed in 2007 was focused on providing value of government.

The National Space Strategy is concerned with meeting the requirements of government departments and agencies, with three priority areas identified – environmental resource management; health, safety and security; and innovation and economic growth.  Within each of these priority areas, a list of sectoral programmes was drawn up, such as marine management, disaster management and stimulating the development of a local space industry.

“Africa is a growth opportunity,” he stresses.

“About three African countries are interested in codeveloping nanosatellites with South Africa. And students from the Space Science Institute of the Pan African University will be converging on South Africa next year, when the programme kicks off”, he added.

“One of the things we did last year was to develop a new strategic framework for the agency and then use it to modify our strategic plan, it is now awaiting Ministerial approval. It includes the identification of the new things SANSA has to do to fulfil its mandate”, Dr Munsami.

On the impact of space in economic development, the technology can also be employed in bridging the yield gap in Agriculture—the gap between the productive capacity of land and the actual, lower, production achieved on that land. The executive chairperson of the SCS Aerospace Group, Sias Mostert explained that using earth observation imagery can increase agricultural production and a production increase of just 10% in Agriculture would have a dramatic impact on the economy.

“There are wider areas of impact: marine area surveillance; environmental management (which is crucial) – from space you can monitor on a monumental scale, and regularly; and communications, especially in remote areas – remoteness is not an obstacle for space-based systems – [thus] providing key communications services anywhere in South Africa,” he said.

Dr Munsami added that EO data and imagery can show ground cover/vegetation, crop production, crop disease, land use, urban development (especially informal urban development), water bodies (their quality and whether they are growing or shrinking), pollution, cloud cover, short-term geographical changes such as landslides and avalanches and, of course, weather, among many applications.

“Any additional development above the base maps would be done by other government agencies and by the private sector. One of SANSA’s roles is to support national systems of innovation, in both the public and private sectors. We are looking at developing a core infrastructure for the country for satellite data development in order to avoid duplication – a distributed system which would be a kind of national EO ‘cloud’. We’re also having discussions about extending this into Africa – to piggy-back on a cloud platform originally conceived for radio astronomy.”

A major focus of SANSA Space Science is space weather, which is the term given to the interactions between the particles radiated by the sun (the solar wind) and the earth’s magnetic field and radiation belts. The particular concern is with the effects of major discharges from the sun, such as solar flares, coronal mass ejections, solar energetic particles and high-speed solar wind, which trigger magnetic storms and intensify the radiation belts. The results can damage satellites, affect satellite navigation systems (such as global positioning systems), cause problems with electrical transmission grids and interfere with short-wave radio broadcasts. They can also increase the radiation exposure of flight crew and passengers on long-distance airline flights.

The SANSA boss adds that the Space Science project was assessed by the World Meteorological Organisation to become the Space Weather provider for Africa and that a formal approval of this is expected soon.

“As of November, this year, a new International Civil Aviation Organisation regulation will come into effect, requiring all commercial flights to have Space Weather data. So, something we have done for many years now has a commercial market! It also gives us an opportunity to train pilots how to respond to magnetic storm warnings. It’s a good example of how space affects our daily lives.”

As part of areas where the agency can explore, Managing Director, Space Operations, Raoul Houdges explained that SANSA’s Space Operations is the most advanced ground station in Africa, with the ability to track all telemetry, tracking and control frequencies presently used in the global space industry. “Our location makes us unique. We act as the last downlink for satellites before they go over the South Pole. Our ability to track any EO satellite, whether for South African use or international use, makes us sought after”, he said. Furthermore, agency’s Space Operations can ‘see’ the second stage of many launches – particularly from the Americas – and can see the separation of spacecraft from those second stages. This capability is very important to the agency or company responsible for the launch.

Hence, we can infer that the Space Operations is a very important local element in the global space economy. It has 11 international partners and many of its services are provided on a commercial basis, paid for in hard currency. Mr Houdges affirms that the current strategic focus is to increase the portfolio to meet the international demand for teleports and GNSS (global navigation satellite systems. Teleports refer to greatly increased data reception and transmission.

“To meet the necessary requirements, we have invested in a new dark fibre cable, from our Hartebeesthoek site to Terraco (a company based in Isando, east of Johannesburg, which acts as a major national and international data node).”

“A joint team is working on a satellite navigation augmentation system. Working with international partners, they have tested a system for Southern Africa. The result is an accuracy of about one metre instead of the five metres to six metres that is usual. The system works. We just need the approval and investment to operationalise the infrastructure. The economic returns could exceed costs by a ratio of ten to one. Our board has already given its approval.”- Dr Val Munsami (CEO, South African Space Agency (SANSA))

SANSA space operations already play an important role in supporting space exploration. It is considering an approach from international partners to establish ground segment infrastructure for a deep space tracking facility. “Basically, it would be able to support unmanned and future manned missions to Mars and unmanned missions beyond Mars.

THE BUSINESS OF SPACE

Executive Director for the SANSA space programme, Mr. Amal Khatri explained that the South African space economy is very small. “We’re currently looking at an industry development framework. A process is under way to look at current capabilities in the country and what needs to be done to ensure a sustainable South African space sector. Obviously, a fully funded national space programme is required. To compete in the global market, we need competitive technology and focus on niche areas. Our market would be global. Over the next three years, more than three thousand satellites will be built. What could South Africa supply into these satellites? The local industry needs funding for research and development (R&D). That can only come through a space programme. Support from a national space programme would allow the development of unique South African intellectual property that could be used commercially.”, he added.

Nevertheless, in addition to private- sector South African companies that process and market products built on satellite imagery, there is a local private- sector satellite and satellite components and systems manufacturing sector. It is indeed small, but it is enjoying success. However, what is critical to achieve this outcome is a critical mass of resources in the form of people, intellectual property and facilities.

A major change in the global space economy has been the development of privately owned satellite constellations. SCS Aerospace Group has partnered with European company SSBV to develop and market high-reliability satellite components. The South African business NewSpace (a joint venture between SCS Aerospace and SSBV) now exports these to 12 countries.

There are many more grounds to cover in uncovering the many opportunities from space exploration; the question is how far can we go?

Peek Into Egypt’s Growing Capacity In Space And The Approved 10-year...