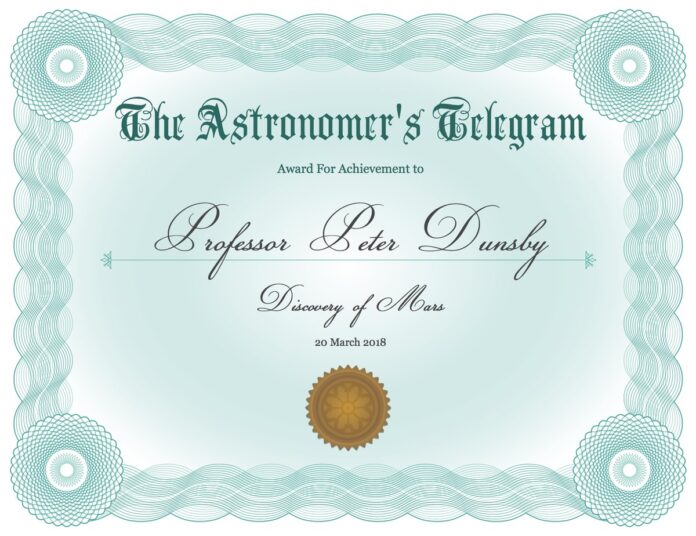 Astronomer Peter Dunsby just made a groundbreaking discovery, after noticing a very bright “star” pop up in his field of view at an observatory at the University of Cape Town that was not present two weeks prior.

Too bad Dunsby was perhaps thousands of years late … the bright object was the planet Mars. Though no one knows for sure who discovered the Red Planet, Galileo Galilei observed the giant red orb — whose diameter spans a whopping 4,222 miles (6,794 km) — in 1609; and Martian fascination has arguably not waned since.

Before realizing his marvelous mistake, Dunsby posted a note on the Astronomer’s Telegram, a publication for very short (under 4,000 characters) reports by astronomers, detailing his observations, in which he described the bright object had shown up between the Lagoon and Trifid nebulas, both nestled in the constellation Sagittarius.

About 40 minutres later, the Telegram issued a correction: “The object reported in ATel 11448 has been identified as Mars. Our sincere apologies for the earlier report and the inconvenience caused.”

And, not to let Dunsby go quietly into the night, the Telegram also sent out a cheeky tweet: “For Discovery of Mars.  Congratulations, Prof.  Peter Dunsby!”

As for why Mars showed up in Dunsby’s field of view, the blood-red planet, like Earth, makes a trek around the sun — though in a different orbit from our own.

“Peter Dunsby (University of Cape Town) reports the detection of a very bright optical transient in the region between the Lagoon and Trifid Nebulae based on observations obtained from Cape Town on 20 March 2018, between 01:00 and 03:45 UT. The object was visible throughout the full duration of the observations and not seen when this field was observed previously (08 March 2018). The optical transients is at least first magnitude and is located at the following coordinates: RA (2000): 18h 04m 50s Declination (2000.0): -23d 29m 58s The coordinates are accurate to a few arcseconds. There is no obvious counterpart at this position on the Digital Sky Survey plates. Observations were obtained using an 80mm refractor. The attached URL show the image of this field (2.3 x 1.7 degrees, plate scale of 9 arcseconds per pixel) on 20 March 2018. The optical transient is the brightest star in the field. Further observations are strongly encouraged to establish the nature of this very bright optical transient. ”

Avid amateur sky watcher here: spent last week scratching my head on a cruise ship sailing the Caribbean wondering what bright red/white light was basking horizon after sunset. From my perspective, the object rose 3 degrees, to fall again, and seemed too low for Mars – #NoWiFi?!