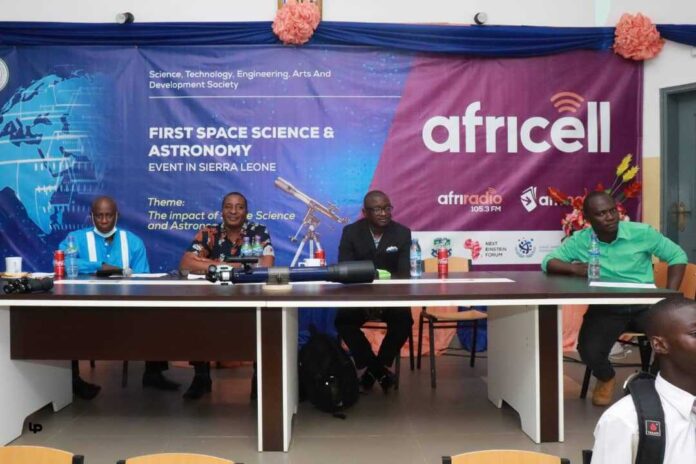 A Sierra Leonean group called Science, Technology, Engineering, Arts and Development Society (STEADS) put together the first space science and astronomy event in Sierra Leone. The theme was tagged, “The impact of Space Science and Astronomy in Sierra Leone”

Space in Africa had a chat with the convener, Alimany Seray. Please find the details below.

I understand it was the first-ever symposium of this sort, what were your expectations before the event?

I was expecting us to create an environment where we can have students and young professionals that are interested in space and raise more awareness in space science and astronomy, because it is not a part of our educational curriculum as well as the benefits and promote Science, Technology, Engineering and Mathematics (STEM), because, in Sierra Leone, we have low participation of students in these areas.

Did your expectations come to pass?

Yes, it did. We actually targeted 100 participants including students, young professionals and government officials, but we had about 120 participants for each day. Some government officials that use Space technology to solve societal problems were also present, including the Director for the Meteorological agency and the Director of Science education and a number of stakeholders which are the Deputy Vice-Chancellor Fourah Bay College University of Sierra Leone, Dean of Faculties i. e Engineering and Pure and Applied Sciences, Head of Departments and many more.

What were space activities like in Sierra Leone before the symposium?

We started raising space awareness in October 2019 when we celebrated the first world space week in Sierra Leone. We invited students and lecturers and the turn up was impressive. We wanted to take that momentum into 2020, but the pandemic disrupted our plans and we had to postpone to 2021. We also organised a series of webinars in 2020 for raising more awareness in space education while also making efforts to collaborate with other international organisations that can help us achieve our vision.

How do you project the impact of the symposium on space activities in Sierra Leone?

The aftermath would be coming to the realization that we don’t only need to use space technology, but also be enabled to create our own space technology. The publicity was massive across the country, we visited three national television and four radio stations respectively.  This was the first of its kind in the history of STEM in Sierra Leone. The event was also broadcasted live. We have started walking the path, we are now ready for capacity building.

Just after the symposium, we got a call from the world cansat and rocketry championship, they said they needed to collaborate with us to organise a cansat competition in order to develop our capacity in these areas.

Is there any follow-up plan for the attendants?

Before the symposium, we had a plan to set up a STEM club in each of the participating schools. These schools will eventually be used as a case study. We had a total of ten schools, so we will be setting up ten STEM clubs for further engagements to mentor and train them in space science and astronomy. We will also be organizing a dark sky tourism event in each of the schools because we received some telescopes from the International office of Astronomy outreach (IAU), and I am currently serving as the National outreach coordinator (NOC). Apart from teaching them about space science and astronomy, we want to also be able to give them a first-hand experience.

In the course of the symposium, there was a competition, could you speak more about the details of the competition?

The competition made the symposium exceptional. Part of our planning included conducting a SWOT analysis and figured out what we needed to focus on. We worked with the IAU and SGAC to develop a handbook, which was used to conduct a one-month outreach program in the 10 schools and also made available to the students. The 17 sustainable development goals (SDG’s) were also captured in the handbook. Some questions were drawn out from the handbook.

How were you able to bring together this event?

Using my influence as the National point of contact (NPOC) for Sierra Leone at the Space Generation Advisory Council (SGAC) and my affiliation with the IAU, I set up a student-based association. The engagements I got from the SGAC and IAU, I conveyed to the team and we work together to accomplish our goals. These two organisations were instrumental in fostering both technical and financial support. We had a number of sponsors like Africell and Rokel commercial bank. We also set up a gofundme account.

What is the next course of action?

We are currently working on the event report, which will be submitted to all our sponsors for future engagements as well as government institutions. Also when we have finished setting up the clubs, we will commence work on the cansat championship.

Towards an Independent African Space Program