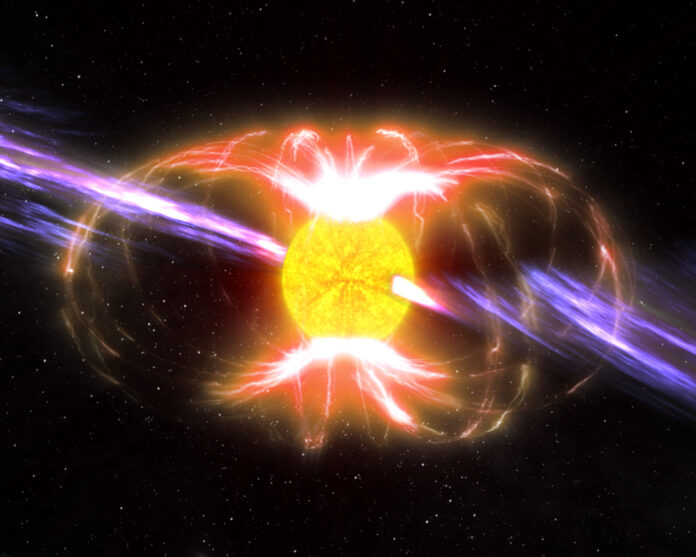 Swift, a space telescope detected a burst of radiation from halfway across the Milky Way on March 12, 2020. This newly discovered X-ray source named Swift J1818.0–1607, was found to be a magnetar, a unique type of slowly rotating neutron star with one of the most powerful magnetic fields in the universe.

It’s the fastest spinning magnetar known, and It spins once every 1.4 seconds, perhaps one of the most recent neutron stars in the Milky Way. It also emits radio pulses like those seen from pulsar which is another rotating neutron star. When this detection was made, only four other radio-pulse-emitting magnetars are known, making Swift J1818.0–1607 a rare discovery.

In a recent study led by a team of scientists from the ARC Center of Excellence for Gravitational Wave Discovery (OzGrav), it was discovered that the pulses from the magnetar get significantly fainter when it moves from low to high radio frequencies. It has a steep radio spectrum. Its radio emission is not only steeper than the four other radio magnetars but also steeper than ~90% of all pulsars. Additionally, they found the magnetar had become over ten times brighter in only two weeks.

In comparison, the other four radio magnetars have close to constant brightness across radio frequencies. These observations were made utilizing the ultra wideband-low (UWL) receiver system installed on the Parkes radio telescope, called The Dish. When most telescopes are restricted to observation of radio waves across narrow frequency strips, the Parkes UWL receiver can pick out radio waves across an extensive range of frequencies all at the same time.

The age of the young magnetar is believed to be between 240 and 320 years, and this was measured from its rotation period and how quickly it slows down over time. The spin-down rates of magnetars are highly variable on year-long timescales, particularly after outbursts, and can result in incorrect age estimations. This is also validated by the lack of any supernova remnants—remnants of luminous stellar explosions—at the magnetars position.

Marcus Lower, the Lead author, proposed a theory in an attempt to explain it’s puzzling properties: “Swift J1818.0–1607 may have started out life as a more ordinary pulsar that obtained the rotational properties of a magnetar over time. This can happen if the magnetic and rotational poles of a neutron star rapidly become aligned, or if supernova material fell back onto the neutron star and buried its magnetic field.”

The buried magnetic field could slowly emerge back to the surface over a long period. Continued observations of Swift J1818.0–1607, over many months or years, are required to test these theories.