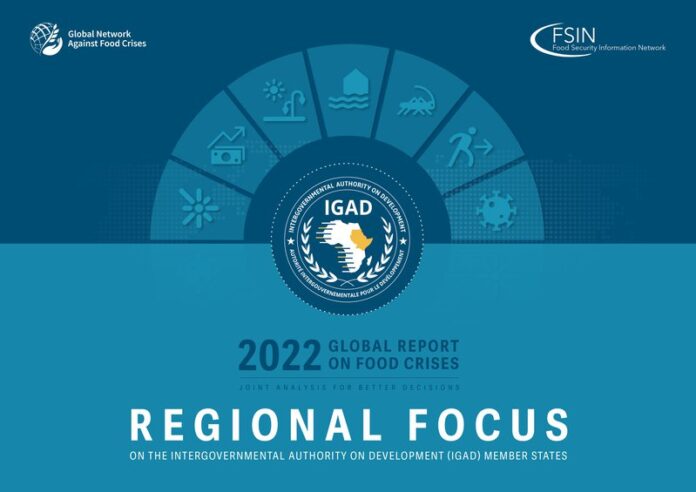 Over 50 million people are expected to face high levels of acute food insecurity (IPC Phase 3 or above) this year across seven IGAD countries (Djibouti, Ethiopia, Kenya, Somalia, South Sudan, Sudan, Uganda) according to the 2022 edition of the IGAD Regional Focus on Food Crises.

Ethiopia, Kenya, Somalia, South Sudan, and Sudan are facing the largest food crises in the region. About 300,000 people are projected to face Catastrophe (IPC Phase 5) in Somalia and South Sudan in 2022, with a Risk of Famine occurring in eight areas of Somalia through September in the event of widespread crop and livestock production failures, spiralling food costs, and in the absence of scaled-up humanitarian assistance.

The situation in 2022, with 50 – 51 million people expected to face Crisis or worse (IPC Phase 3 or worse), marks a dramatic increase from 2021 when 42 million people suffered from high levels of acute food insecurity. Last year, the IGAD region accounted for nearly 22% of the global number of people in Crisis or worse (IPC Phase 3 or above), with an estimated 10 million children under the age of 5 suffering from acute malnutrition. In addition, 24% of the world’s 51 million internally displaced people were also in IGAD countries, mainly Ethiopia, Somalia, South Sudan, and Sudan.

“Our region has been hit like never before”, says Workneh Gebeyehu, Executive Secretary of the Inter-Governmental Authority on Development (IGAD). “The combination of climate extremes, conflict, and macroeconomic challenges makes it almost impossible for our otherwise very resilient communities to sustain multiple shocks. The figures we are releasing today are heartbreaking, and I’m very worried they could increase even more as the outlook for the October to December rainy season is bleak.”

“The current food security situation across the Horn of Africa (Ethiopia, Kenya, and Somalia) is dire after four consecutive rainy seasons have failed, a climatic event not seen in at least 40 years, or since the beginning of the satellite era”, notes Dr Chimimba David Phiri, FAO Subregional Coordinator for Eastern Africa and FAO Representative to the African Union and UNECA. “Now more than ever, we must implement short-term livelihood-saving responses with long-term resilience building aimed at addressing the root causes of food crises in our region”.

Climate change and La Niña have caused an unprecedented multi-season drought, punctuated by one of the worst March-to-May rains in 70 years. The latest forecast by IGAD’s Climate Prediction and Applications Centre (ICPAC) is for a fifth consecutive failed rainy season across the region, with the latest long-term forecasts for the 2022 October–December rainfall season indicating an increased chance of below-average rains.

“Conflict, climate extremes, economic shocks, rising costs and now the impact of the conflict in Ukraine on food and energy prices are pushing millions towards starvation in Eastern Africa,” says Michael Dunford, the World Food Programme’s Regional Director for Eastern Africa. “Sadly, there is a very real risk of famine in the region, and we must do everything possible to prevent this from happening. At the same time, together we must start building the capacity to prepare and respond to future shocks which are increasingly inevitable because of a changing climate.”

The fourth edition of the IGAD Regional Focus on Food Crises continues to provide essential information, analyses, and insights to collectively address the causes and consequences of escalating acute food insecurity and malnutrition in Eastern Africa.

It is a by-product of the annual Global Report on Food Crises (GRFC 2022), which is the result of a complex, multi-partner, consensus-based process involving commitment and contributions from a multitude of agencies and individuals. It is facilitated by the Food Security Information Network (FSIN) in the framework of the Global Network Against Food Crises.