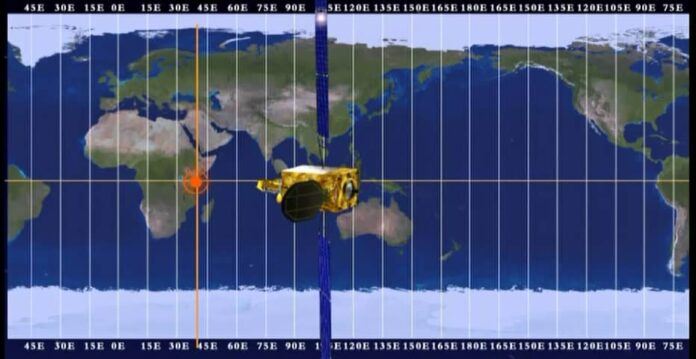 The Agency for Air Navigation Safety in Africa and Madagascar, ASCENA, has commenced a Satellite-Based Augmentation System (SBAS) broadcast signal over Africa and Indian Ocean (AFI) region, providing the first SBAS open service in this part of the world on NigComSat-1R satellite, a communications satellite managed and operated by NIGCOMSAT Ltd under the Federal Ministry of Communications and Digital Economy of Nigeria.

The open service is provided as part of the ‘SBAS for Africa and India Ocean’ programme which pursues the autonomous provision over the continent of SBAS services to augment the performances of the satellite navigation constellations GPS and Galileo.

The Managing Director/CEO, NIGCOMSAT Ltd Dr Abimbola Alale has expressed delight on the development and said. ‘We are proud to be part of this ambitious program to provide satellite navigation services in the African and Indian Ocean region. The use of our geostationary communication satellite NigComSat-1R navigation payload to broadcast the first signal will be Africa’s premier communications satellite contribution to SBAS as a regional satellite-based augmentation system for the continent’, declared Dr Alale.

According to the SBAS Project Manager in Nigeria, Dr Lasisi Salami LAWAL, ‘it will improve accuracy within a meter and boost integrity, availability and continuity of safety-related applications.  The SBAS services will improve flight safety and efficiency in Africa as well beneficial to the economy in many areas as land, sea and rail transportation, market applications, supporting user safety and cost-effectiveness to grow Nigeria’s GDP’.

Therefore, in pursuance to the implementation of the regional satellite-based augmentation system as built on NIGCOMSAT-1R,  it will follow the policy direction of the Hon. Minister of Communications and Digital Economy; Dr Isa Ali Ibrahim (Pantami) FNCS, FBCS, FIIM,  in digitalizing the Nigerian economy to grow the GDP and value propensity not only in communications sector but Aviation, Maritime, Rail Transport, Precision Agriculture, Survey, Oil & Gas sector, Security of strategic national infrastructure and mass-market applications for sustainable development beyond Nigerian shores.

Dr Lasisi said the open service essentially is aimed at carrying-out technical trials and partner with airlines, field demonstrations for aircraft and rotorcraft, to demonstrate the benefits of the future operational safety-of-life SBAS services expected from 2024. It is expected to include Precise Point Positioning (PPP) and emergency warning service to populations, which performance will be proven through demonstrations.

The system prototype uses reference stations network, the SAGAIE network deployed by CNES and ASCENA with the support of Thale Alenia space.

The signal is broadcast via the SBAS payload on NigComSat-1R geo satellite of NIGCOMSAT Ltd and uplink station deployed in Abuja (Nigeria). It is compliant to the standards and Recommended Practices of the International Civil Aviation Organisation and the Minimum Operational Performance Standard developed by the Radio Technical Commission for Aeronautics (RTCA) organisation. It will be visible in the whole Africa and the Indian Ocean up to the West Australia coast and also in Europe.