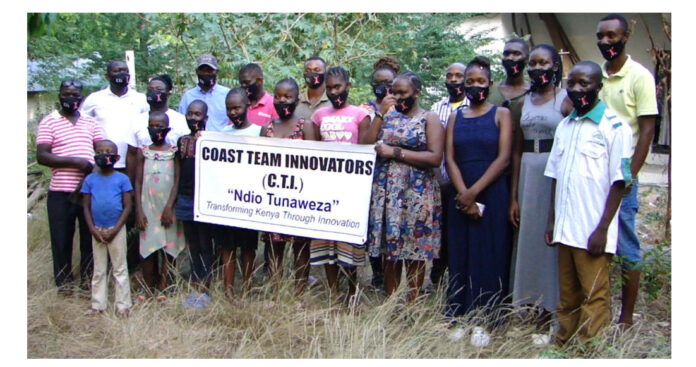 The Coast Team Innovators (CTI) is a technology hub located in Watamu at the Coast Region in Kenya. CTI is an innovation hub for youths aiming at solving problems and making life a better place for all Kenyans. Mr Egan Baya founded the group back in 2016 to incubate young innovative minds and create an enabling environment for them to reach their full potential. Currently, there are 27 young innovators at the CTI; the youngest in the team is eight years old. Furthermore, CTI has had an enormous impact in the coast region of Kenya, especially in motivating the youths through empowerment programs, training and local exhibitions through STEM in schools fairs and community-based programmes. In addition, CTI has since participated in several exhibitions/hackathons, winning a host of awards.

To learn more about the CTI and their offerings, Space in Africa had a chat with CTI’s Head of Communications, Curtis Wanzala, to discuss the Uhuru K1 satellite project and other projects within the organisation.

What led to the satellite project, and how is the journey so far?

Satellite communications play a vital role in the global telecommunications system. Approximately 2,000 artificial satellites orbit the Earth which relays analogue and digital signals carrying voice, video data to and from one or many locations worldwide. In addition, many African nations have been embracing space technology development leading to improved collaboration within Africans to ensure that we develop space systems in-house, void of any foreign party involvement. Also, Kenya Space Agency (KSA) is one of the space agencies in Africa focusing on developing technologies and applications for space exploration to support sustainable economic, social and environmental development. Consequently, KSA hopes to achieve its mandates by promoting research and innovations in space science and technology to enhance the over development of the country.

The Uhuru K1 satellite project is led by members of the CTI, including the Founder of CTI, Mr Egan Baya; CTI’s Head of Communications, Curtis Wanzala; Lemmy Kafulo and Gershone Kafulo. The Uhuru k1 was coined from Its predecessor, the Uhuru satellite launched from San Marco Malindi, Kenya, in 1970 to conduct space astronomical studies. However, the Uhuru K1 is a uniquely inspired artificial satellite that would revolutionise the global communication sector and provide multiple functions. A multi-function satellite is an innovation that has never been implemented in our continent, Africa.

The Uhuru k1 satellite project began in 2018 after our participation at the Young Scientist of Kenya (YSK) at the Kenyatta International Convention Centre (KICC). At the event, the Kenyan president and the patron of YSK, HE Uhuru Kenyatta, challenged all Kenyan youths to develop solutions to improve Kenya’s communication capability. We thus named the satellite [Uhuru K1] in honour of our honourable president. However, before embarking on this project, our team has developed several other solutions to better the lives of our countrymen. Therefore, we felt that it’s part of our role to embrace space science and develop a satellite system to solve Kenyan problems, especially in the communication and  IT sectors.

However, like several other African states, internet connectivity in Kenya is abysmal, especially in remote regions. Therefore, we took it as our responsibility as Kenyan youths to collaborate and provide solutions to the communication challenges across Kenya. 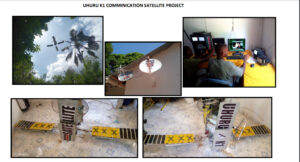 The satellite project is a prototype at the Beta development stage, and it includes a cube nanosatellite, microsatellite and ground control stations. Furthermore, the prototype satellite has proven to be reliable, and we are now focused on developing a telecommunication satellite that will be launched to space soon. We hope that we’ll be able to leverage the momentum from the project to stand out as both an upstream and downstream service company and offer better, reliable and more affordable service in Kenya.

Can you talk about the ongoing satellite project, the specification, the cost and the stage of development?

The Uhuru k1 is a multi-band telecommunication satellite, a unique multi-service satellite specifically designed to ensure faster and better network accessibility in all areas within its coverage. Presently, it consists of a prototype of a cube satellite (nanosatellite 9.2kg), a microsatellite (54kg) and a ground station. Furthermore,  it is specifically intended to promote Industrialisation. In addition, the Uhuru k1 uses the C band for fixed and mobile services. Also, it has high powered transponders, mainly operating under the VHF and UHF frequency bands. This allows for faster signal transmission, as its geographical coverage is much broader, thus bypassing signal losses caused by terrain obstructions and line-of-sight (LOS) propagation signal interference due to the radio horizon limit.

Also, the Uhuru k1 uses the Ku band for broadcasting services. The main reason is to help create awareness in remote regions and for educational purposes through various legitimate open-access resources. This will help our fight against the lack of education in underdeveloped regions as one may only need a simple radio or television to access these resources. Furthermore, the satellite can be accessed by a remote platform. It can also provide information via radio FM, VHF and LW receivers primarily to caution road users about blackspot areas prone to accidents.

In addition, the solar panels on the satellite can be adjusted via remote systems. This allows for adjustable angular position to ensure optimum powering of the satellite at all times. Also, the ground station is equipped with a multi-band array of antennas capable of receiving and relaying/transmitting radio signals. A full band modulator also integrates all received radio signals, both VHF and UHF bands, respectively. Furthermore, the Uhuru K1 also has ham radio receivers and cellular mobile network amplifiers that receive the frequencies on the radio spectrum, mainly to modulate and re-transmit or broadcast mutually throughout the airwaves.

Moreover, the Uhuru k1 satellite is currently a prototype weighing 54kg, and there are limitations to its capabilities as its design presently fares incomplete in regards to its full potential. The main factor is limited funds for better resource allocation. However, with significant contributions from the local community and personal contributions, the Uhuru k1, though in its BETA state, can broadcast up to a 40-kilometre square radius and from only 15 meters off-ground, held stationary between two palm trees, by robust metal cables. This signifies that it harbours even more tremendous promise to national and international implementation. Also, with the necessary support, the Uhuru k1’s capabilities would be limitless. To date, we have spent around KSH 1.2 million (USD 12,000) on the prototype and are still working assiduously to improve its capabilities.

What are the problems that this satellite is trying to address?

Consequently, the Uhuru K1 offers a cocktail remedy to global communication. Some of these solutions include:

Who are your partners on this project, and what source of funding is available to you?

Coast Team Innovators is a small growing hub of resourceful professionals in diverse professions and expertise. This has made it ideal for members to collaborate and develop solutions to realise a common goal. We have been operating on bootstrap funding as members keep on investing more as the need arises. We are also looking forward to a government grant from Kenya Space Agency (KSA) and the National Commission for Science, Technology and Innovation (NACOSTI) to reach our potential.

Yes, we are in contact with the Kenyan government by liaising with the Ministry of Defence through the Research and Development Branch. Also, we are currently in the process of engaging the KSA for partnership into the space project. In addition, we are in contact with other ministries within the Kenyan government on different projects besides the Uhuru k1 satellite project.

Also, our goal is to collaborate with the government to ensure that we transform Kenya into a knowledge-based economy with innovators capable of taking charge of any and all space systems to propel Kenya’s social, economic and environmental development.

How do you intend to leverage your team’s unique position to inspire more innovative solutions within Kenya and, by extension, Africa?

We plan to do this in a couple of ways:

There are little or no inter-African relations in terms of capacity development in the space sector. What do you think is the cause of this, and how do you think we can improve this?

The problem is relatively easy to diagnose – most African countries are still new to the space community. However, several countries have recorded incredible feats in their space journey, including Egypt, Nigeria, South Africa, etc. Therefore, fostering more collaborations between African countries should be a top priority for the industry stakeholders to ensure that we bring the remaining countries without a robust space programme onboard. Also, the expertise should be deconcentrated so that each country would contribute based on technical capacity and exposure. In addition, I firmly believe that Africa can begin to record a continental growth in space programs and explorations through such programmes.

Through our team, we are already laying the foundation for this across the continent. Also, we are witnessing a surge in students taking STEM courses, which is a prerequisite for space science and engineering courses. However, we need to invest more in capacity development and exchange programs in every space-related programme to establish a sustainable talent pipeline to meet future skills needs in Africa. It might take a while to achieve, but it is the best way to move forward as a continent.

I am also not surprised that many prominent inventors and scientists from the 20th-21st century are Africans, including our own Elon Musk, a South African native scientist and entrepreneur. And I am confident that we have more than enough talents on the continent to produce more talents that would replicate and surpass Musk’s achievements.

Yes, we have been involved in a host of other innovations, including: 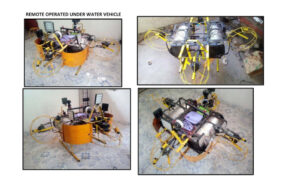 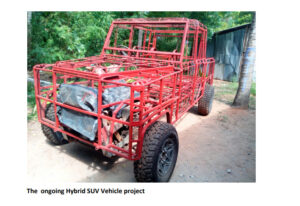 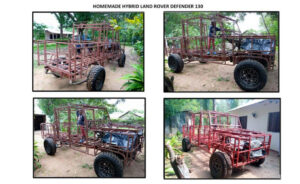 2. Hybrid S.U.V Truck – is an African made truck specifically designed for fuel consumption on Africa roads and to generate less pollution. The vehicle is custom made to fit our daily needs in transportation. It is in the fabrication phase stage. 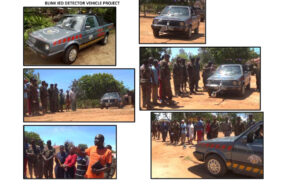 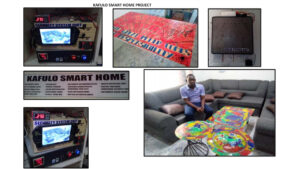 5. Smart Home System – an integrated system that uses renewable energy systems in security systems and controls. The house is programmed to each client’s requirements.

What are your future aspirations?

As a team, we would like to live in a future where access to information is much faster compared to what we have today. As a result, we would like to develop solutions targeting the realisation of remotely operated contraptions, i.e. networked traffic systems, to solve heavy traffic jams in populated cities globally. Furthermore, we are interested in solutions to enhance the implementation of perfect navigational and global guidance systems through a centralised hive satellite network connective. Also, we would like to design a satellite system capable of conducting astronomical studies that would enable deep space ventures in search of potentially habitable planets. We would also like to collaborate with other African nations that share our passion and aspirations of developing an improved method to tackle thruster handling challenges and propulsion system control in space.