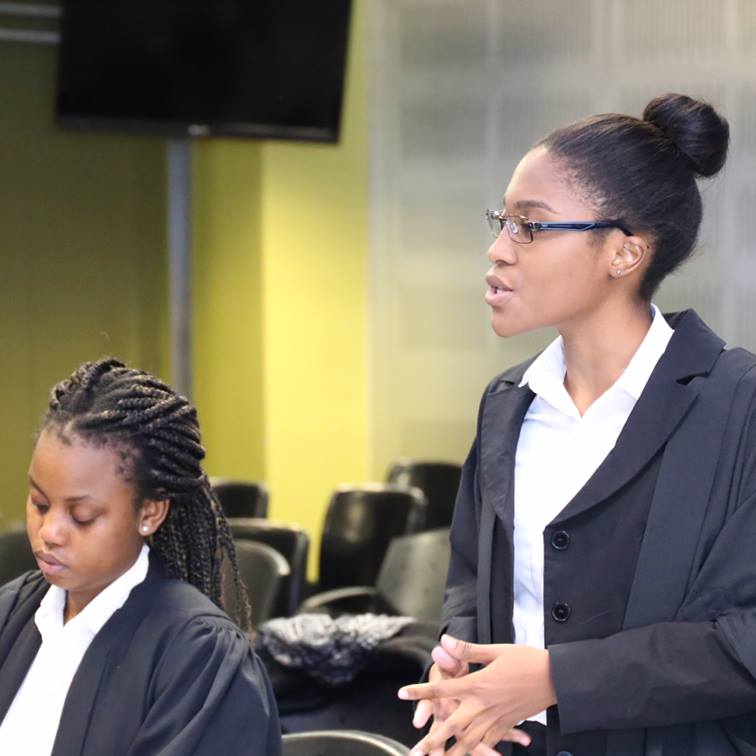 On the afternoon of Thursday, October 4th, 2018, Africa made history by winning the finals of the 2018 Manfred Lachs Space Law Moot Court finals in Bremen, Germany during the 2018 IAC . This is the first time Africa would be winning the finals since its inception in 1992 by the International Institute of Space Law (IISL) breaking the 26 year record. 23 year old Ruvimbo Samanga coached the winning team to this historic win. In this interview with Space in Africa, she talks about her experience growing up and building a career in Space Law.

How was it like growing up? Tell us about your background

I grew up in the small city of Bulawayo Zimbabwe. Life was idyllic and simple and I am still in every sense of the word your typical small town girl. Where I come from one rarely thinks of outer space and astronomy but growing up my parents continuously challenged me to learn more by engaging me in a lot of reading material and extra curricular activities. This is how my love for space and science developed among many other interests.

How did you get into space law?

My journey with space law began when I was introduced to the Manfred Lachs space law moot court competition by my University faculty which has previously taken part in the competition since its inception in 2012.

I had previously never encountered such a specialised field of study in my academic career, and the subject is not offered at undergraduate level, so I was curious to learn more about it through the competition, which is a mock trial for law students, usually centred around a present pertinent legal issue in the space community. This year the problem dealt with resource-mining in outer space, an area of space law I am now well invested in.

You recently led some students to win the Manfred Lachs Space Law Moot World finals in Bremen, Germany in September, could you tell us about the journey?

My journey actually began in 2017 when I participated in the competition as a speaker, winning best speaker for the African rounds and my team walking away as winners of the African Regional Rounds, as well as best written arguments. We went on to participate in the World Semi-Finals which were held in Adelaide, Australia where we unfortunately lost to the Indian team, who were the Asia-Pacific regional winners, and they later on went to win the competition.

The journey did not end there however, as this year I decided to coach the incumbent University moot team, alongside my colleague Mr Lawrence-John Maralack, which team won best memorials and overall winners of the African Rounds and we later went on to compete in and win the world finals.

It was obviously a tale of growth and sacrifice requiring us to set aside 11 months of preparation, as well as using the knowledge I had previously gained to prepare the students for the global stage, which was undoubtedly much different than all of us were used to.

What does this win mean for Africa?

It means that the continent can finally begin to take its rightful place in the space law community and further confirms that Africa is indeed a competent player in international fora. I hope it especially inspires young individuals and girls to aim for the stars, literally, and persuade various bodies to include Africa, and particularly African youth, in international discourse as we do have a lot of viable ideas to contribute.

In the future, should we expect more win at the finals by African countries?

Yes definitely! To do this emphasis must be placed on skills transfer, to ensure the knowledge gained is pooled, shared and expanded upon to equip the next generation.

Aside Nigeria and South Africa, what other African countries are into space law?

Presently countries such as Ethiopia and Algeria are growing in space law, and to date my home country of Zimbabwe recently established a space agency this year. However, few other countries are yet to dip their feet into the space law pool with other tentative endeavours by countries like Kenya and Ghana which are at present tabling space legislation for promulgation.

I support the notion fully and believe it is a commendable initiative, one which echoes the foundational principle of space law which is that outer space exploration should be done for the benefit of all mankind and in the interests of international cooperation.

As space activities are set to become the driving point of the 4th industrial industry its pertinent for Africa to establish itself so as to avoid the risk of falling behind in the scramble for opportunities in space. Pooling resources together will ensure the speedy and necessary inclusion of the entire continent to the benefits from outer space exploration, which is the express goal of the preparatory works on outer space for developing nations.

It will also bring certainty and security of law to the African space industry. If one uniform law is adopted with regards to space affairs, it will better facilitate trade, dispute resolution and joint projects between African states and allow us to develop a truly Afrocentric comprehensive policy.

What role do you think the youth are going to play in the implementation?

They have a large role to play especially because we make up the majority of most populations on the continent. We are also a very tech savvy and innovative generation and I believe our acumen with modern developments will serve us well in a society that is and will only continue to develop.

The youth have more resources available today than they ever did before, like social media and the internet, which we can leverage to find new solutions to existing challenges and I believe that this, combined with our unlimited zeal will serve our continent good stead in implementing a space programme that is supported by the youth.

What do you think about the gender imbalance in the Space industry?

As in all industries it is lamentably an imbalance that still needs to be addressed. This does not take away from the earnest efforts of organizations such as Women in Aerospace Africa and the women’s day events frequently organised both locally and regionally by government departments to attract and retain more women. 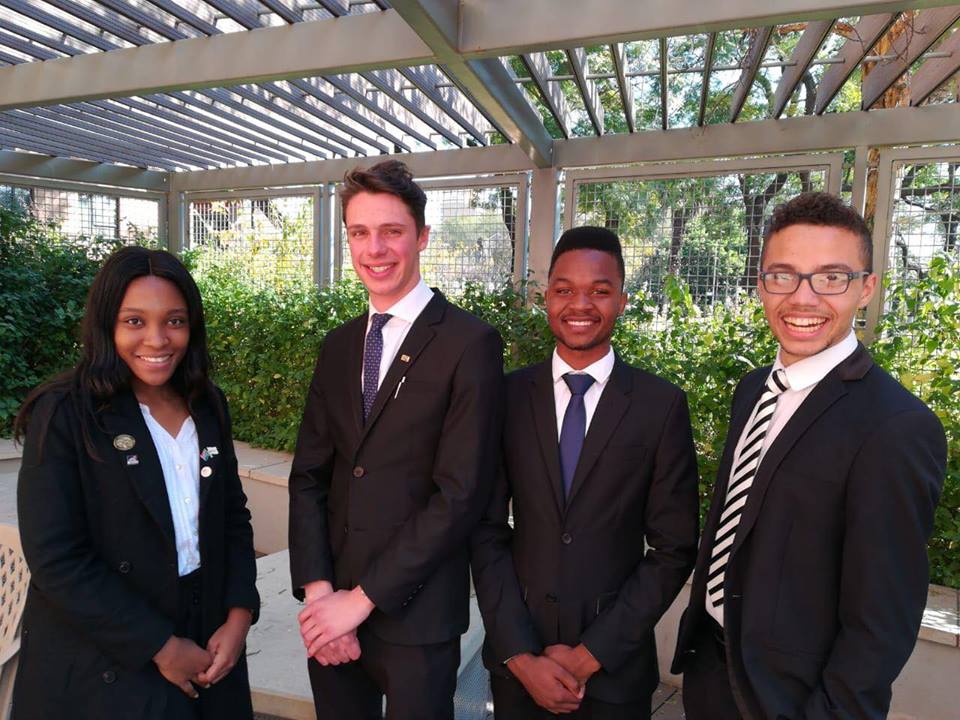 How do you think we can get more girls involved in Space & STEM?

From my experience the greatest pull factor was awareness. Young women and children are still greatly disadvantaged simply because they are not aware that certain opportunities are available to them. Access to information and resources remains a big problem on the African continent, and it is a problem that means that many girls are still held back by archaic and outdated principles on life and career choices.

I have been privileged this year to take part in a pilot project to involve high school girls in workshops designed to enlighten them on the various career options available when one studies space law or any other technical sub-field in this industry. Most girls were excited to learn that they could pursue what is an interesting and engaging topic and be well employed and fulfilled doing it, and this is usually most peoples prime concern when choosing a career.

If more of such events and active and intentional engagement could occur it would go a long way in assuring young girls that Space and STEM are a viable and worthwhile career choice.

Who is your mentor and why?

My mentor is Advocate Lulekwa Makapela. Many in the space law industry will know her as a pioneer and strong catalyst for the development of space law on the African continent. She models the type of individual I would one day hope to be, not only as a key player in space law but also a determined and passionate individual who yearns to mould and support other young ladies to do the same. It is safe to say that my career in space law would not have been as fruitful if it were not for her efforts in continuously giving me a platform to showcase my talents.

What advice would you give a 12 year old you?

To be proud to be an African and not to let circumstances define how you think or act.

Lastly, what keeps you moving forward in your career?

What keeps me going is the sheer potential it holds, whether in experiences or the possible solutions to African challenges that space law has to offer. Being a new field on the continent, the opportunities and capacity for growth are immense and my goal in pursuing space law has always been to find a balance between a career that presents an innovative solution to a challenge faced on the continent while still being engaging and fun. Space law offers all of these which is why I’m persuaded to continue immersing myself in this field.

SPARC to Inspire a Generation of Young People in Kenya

Mauritius’s Big Step to becoming a Spacefaring Nation: The story of MIR-SAT 1