In 1972, Nigeria introduced one of Africa’s most radical indigenisation law; Nigerian Enterprises Promotion Decree. This law established indigenous control over foreign businesses in Nigeria. This was dubbed the Nigerianization policy.

The highlight of the law is in the division of the economy into two, vis; schedule 1 and schedule 2. Schedule 1 says that businesses under the following sectors must be operated 100% by Nigerians; PR, advertising, pool, haulage of goods by road, block and brick making, bakeries, laundry, cinema, newspaper publishing and printing. Schedule 2 says that the following sectors must have at least 40% Nigerian shareholders; brewing of beer, soft drinks bottling, cosmetic manufacture, boat building, department stores and supermarkets, manufacture of bicycles, cement, matches, metal containers and soap. To enforce this, the Nigerian Enterprises Promotion Board was created.

In a bid to protect the economy from collapsing, the government acquired interests in major expatriate led banks within the country including First Bank of Nigeria and Union Bank of Nigeria and mandated a compulsory percentage of loans be made to Nigerians. The government also acquired interests in the insurance and oil and gas sectors. A new bank, the Nigerian bank of Commerce and Industry, came into existence to facilitate loans to Nigerians to invest in foreign-owned firms.

Unsurprisingly, many foreign investors left while some of them begrudgingly sold shares to the Central Bank. What the decades that followed showed Nigeria was that you should not force an economy to grow if you do not have the facilities to develop it. In 1995, the law was repealed with the promulgation of the Nigerian Investment Promotion Act, creating the Nigeria Investment Promotions Commission. The new law and commission hastily reverted to allowing foreign companies to operate under Nigerian laws without the compulsion of having a certain percentage or limitations as the indigenisation law did.

History repeats itself in Zimbabwe.

As if Zimbabwe did not learn anything from Nigeria, it went through its own damaging economic decisions. In the late 1990s, the Zimbabwean government started land reforms intended to evict white landowners and place their holdings in the hands of indigenes. However, many of the farmers had no experience or training in farming. From 1999 to 2009, the country experienced a sharp drop in food production and all other sectors. The banking sector also collapsed, with farmers unable to obtain loans for capital development. Food output capacity fell 45%, manufacturing output 29% in 2005, 26% in 2006 and 28% in 2007, and unemployment rose to 80%. These problems spiralled across the Zimbabwean economy, facing several sanctions. Without proper education, the government introduced more economic measures to arrogantly promote Zimbabwe, including printing more money, price control and a future currency crisis, forcing Zimbabwe to operate on more than one currency. By November 2008 hyperinflation in Zimbabwe was at 79,600,000,000% and 98% daily inflation rate.

Every time Zimbabwe tried to amend these errors by pushing away foreign investors and focusing on indigenisation, the result was drastic. In 2008, Zimbabwe’s parliament passed the Indigenisation and Economic Empowerment Act into law, taking effect from March 1, 2010. The law prescribed five-year jail terms to foreigners who fail to submit an indigenisation plan by April or those who use locals as fronts. The government of Zimbabwe wanted to force investors to accommodate citizens in foreign companies for up to 51% stake. These companies are primarily dependent on funding from foreign investors and will have to make do with 49%, or face a jail term. Many of these companies took the exit.

In 2019, the new Finance Minister, Mthuli Ncube, tried to reintroduce a new Zimbabwean currency. Hyperinflation returned. It was estimated that inflation reached 500% in 2019. The annual inflation rate in Zimbabwe was 540% in February 2020. The annual inflation rate had risen to 676% in March 2020 with a bleak economic outlook due to the effects of a drought in 2019 and the Coronavirus pandemic. What started as a forced indigenisation policy in the 1990s has left the Zimbabwe economy in shambles, almost three decades later. Kenya is about to walk this path, with a focus on its science and technology sector.

Kenya first attempted an indigenisation policy in 2015. Section 975 (2) (b) of Companies Act 2015, made it mandatory for foreign companies establishing branches in Kenya to demonstrate that Kenyan citizens hold at least 30% of the company’s shareholding. This, unfortunately, led to dire economic consequences. Section 85 of the Finance Act, 2016 repealed the 30% local shareholding requirement for foreign companies in Kenya.

In 2019, Kenya introduced a new National Information Communication and Technology (ICT) Policy mandating that Kenyan individuals or corporations must own at least 30% of any tech venture rooted in the country, lest such companies will not be licensed to operate in the country. The ICT ministry said the reason for the action was because “the government strongly encourages Kenyans to participate in the ICT and science and technology sector through equity participation”. The new law says that government ICT procurement processes will give preference to local ICT companies in the award of tenders, including in sectors like security and defence. Further, where local businesses cannot fulfil tender requirements, foreign companies will have to transfer skills and personal to local firms.

Kenya seems to be well-intentioned about this policy, considering that in 2019, 63 Kenyan startups disclosed funding deals, and expatriates founded 41.2% of those startups. In 2018, startups founded by foreigners accounted for 52.2% of the total number of startup funding deals disclosed in Kenya. A Village Capital report even asserted that as of 2017, 90% of fintech investment in East Africa was poured into startups with American and European founders. But how well-intentioned it might be, this is the wrong turn to take.

Can Kenya Afford its indigenisation?

The simple, straightforward answer is NO. Data compiled by 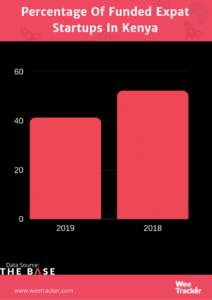 WeeTracker revealed that Kenya-based startups raised a total of USD 428.9 million in total disclosed funding deals recorded in 2019. Expat-founded startups were the recipients of 87.8%, raking in a staggering USD 376.7 million. In Kenya, foreign founders raise more money than indigenous founders, as they have better chances of attracting VCs than their local counterparts.

According to the 2020 Index of Economic Freedom, Kenya’s economic freedom score is 55.3; making Kenya’s economy the 132nd freest in the 2020 Index. Kenya is ranked 23rd among 47 countries in the Sub-Saharan Africa region, and its overall score is approximately equal to the regional average and well below the world average. Unlike foreign founders, local founders do not experience financial support from VCs, due to Kenya’s frail economy. There are almost no local funders for science and technology in Kenya. Kenya mandating foreign founders to leave 30% shares for local owners is laughable because local founders would be starting more companies if they could afford to. What this therefore means is that the companies must either find a way to co-opt indigenes or risk losing their licenses.

The foreword of the policy document mentions that “the objective is to facilitate the creation of dignified jobs that provide financial security and independence to allow greater innovation and future thinking”. To achieve this, Kenya has very structural deficits to fill before it can consider effective execution. The Kenyan economy needs to be freer; infrastructures need to be provided to facilitate the ease of doing business, and regulations should focus on accomodating more activities instead of excluding them. Without allowing Kenyans to make their own money and get expertise through foreign companies investing heavily in the Kenyan economy, it becomes difficult for Kenyans to have an ecosystem that supports innovation.

Kenya’s science and technology industry still needs all the financial support it can accumulate, and indigenisation is an early call that may crumble the economy. We have seen it happen in Nigeria and Zimbabwe, Kenya should learn from the other economies to avoid a shutdown.

Earth Observation is Essential for Policy Development in Africa