Home Opportunity Kenya’s first satellite will be deployed into Space from the ISS on...
Facebook
Twitter
WhatsApp
Linkedin
Telegram 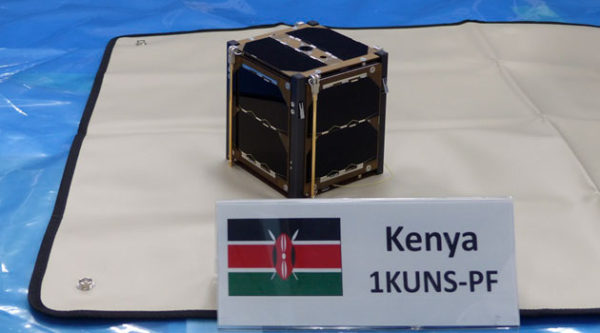 Kenya’s first satellite will be deployed into space from the International Space Station (ISS) on Friday. The satellite was developed by engineers from the University of Nairobi in collaboration with the Japan Aerospace Exploration Agency (JAXA).

It was delivered to the ISS on April 2 awaiting deployment into space on Friday at 1pm. The ISS is a large spacecraft that orbits the earth. It is also a home for astronauts working on space science.

“This is the first outer space object registered by Kenya. It will also be the first Kenyan satellite to go into space,” Mbithi said.

The event will be broadcast on KBC and streamed live from Japan.

The satellite has a volume of just one litre and is shaped like a 10 by 10 centimtre cube. It is reffered to as a nanosatellite, an extremely small satellite.

Such small satellites are capable of performing commercial missions that previously required larger satellites. Unlike the larger ones, nanosatellites are not deployed directly from earth, but are first delivered into the ISS, where Japan operates a robotic arm. The robot will later spit the nanosatellite into the space.

Mbithi said development of satellites will be part of the university’s curriculum.

“Masters and PhD students who show great passion for space science will be annually recruited to join the satellite design, manufacturing, launch and mission operation teams,” Mbithi said. He spoke during a media briefing at the university.

Dean of the school of engineering, Mwangi Mbuthia, said the university will host the base station.

“It has a life-span of between one year to 18 months, after which it will de-orbit and burn up,” he said.