The ministers and senior officials responsible for science and technology in the partner countries concluded the 5th Ministerial Forum Meeting on the SKA/AVN in Cape Town, South Africa, on 16 October.

The main aim of the SKA/AVN African Ministerial Forum is to provide political and strategic leadership on matters pertaining to the SKA and AVN projects and other relevant initiatives, including the establishment of Big Data infrastructure and capacity.

While all the member countries highlighted financial constraints as a major obstacle to the full rollout of the AVN project, they were unanimous that progress was being made.

Partner countries particularly welcomed the positive results of the SKA Human Capital Development (HCD) programme. To date 127 students from partner countries have benefitted from the HCD initiative, out of a total of 136 from Africa as a whole.  Of these, 14 have graduated with honours, 32 with master’s and 24 with doctoral degrees.

The meeting noted another initiative aimed at developing radio astronomy capacity in partner countries, namely the Development in Africa through Radio Astronomy (DARA) programme.  DARA was specifically designed to support the African SKA and AVN projects and it is making valuable contributions to strengthen radio astronomy in partner countries. Funded by South Africa and the United Kingdom (through the Newton Fund), DARA undertakes numerous projects, including running Linux and Python training for science and engineering postgraduate students at South Africa’s Centre for High Performance Computing (CHPC).  The courses are important for capacity building in high performance computing and data science, a key technologies to support and develop radio astronomy.

The Ministers noted the importance of the Big Data Africa project for both astronomy as well as more general preparations for the fourth industrial revolution. Given the significance of big data and cyberinfrastructure in economic development at both national and regional level, it was agreed that South Africa and Namibia would explore ways of integrating the Big Data Africa activities in Southern Africa into the SADC Industrialisation Strategy, taking into account prior work within SADC, and liaising with the other members of SADC.  Kenya will explore a similar intervention in East Africa, and Ghana in West Africa. It was recommended that this work be presented to the African Union through the intervention of the Ministers.

The meeting also congratulated the team, led by South Africa, that had successfully bid for the International Astronomical Union’s 2024 General Assembly to be held in Africa for the first time.  In anticipation of this event, member countries were urged to contribute to a working document titled “Astronomy 2024 – The Audacious African Vision”, which includes ambitions for human resources, infrastructure, legacy projects, operations and funding. 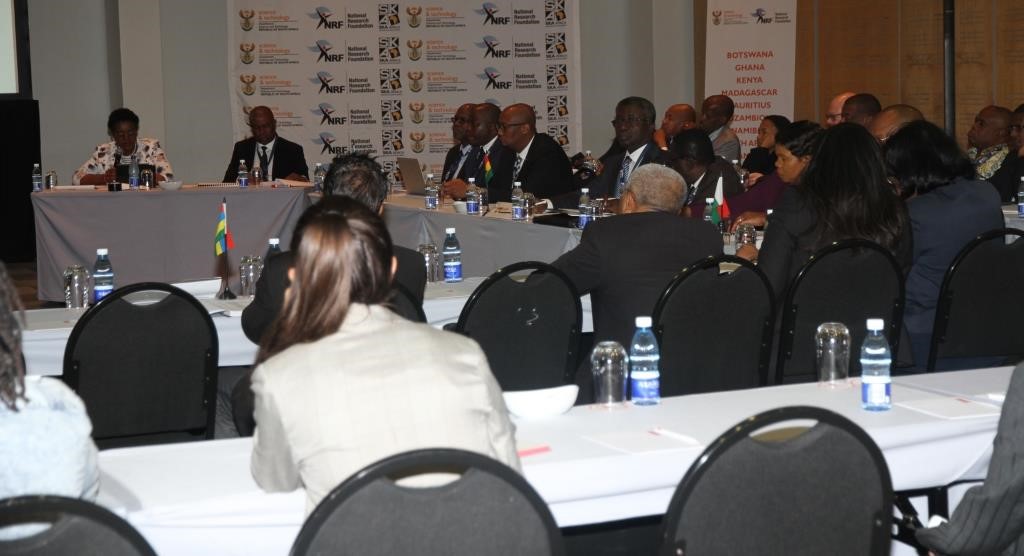 The SKA will be the world’s largest and most sensitive radio telescope. The total collecting area will be approximately one square kilometre, giving 50 times the sensitivity and 10 000 times the survey speed of the best current-day telescopes. It is being built in Africa and Australia.

Thousands of receptors will extend to distances of up to 3 000 km from the central regions. The SKA will address fundamental unanswered questions about our universe, including how the first stars and galaxies formed after the Big Bang, how dark energy is accelerating the expansion of the universe, the role of magnetism in the cosmos, the nature of gravity, and the search for life beyond Earth.

The SKA Organisation, with its headquarters at Jodrell Bank Observatory, UK, was established in December 2011 as a not-for-profit company in order to formalise relationships between the international partners and centralise the leadership of the project.

The AVN project has been funded to the tune of R160 million by South Africa’s African Renaissance Fund (administered by its Department of International Relations and Cooperation) and the South African Department of Science and Technology.

10th International Conference Of The African Association Of Women In Geosciences