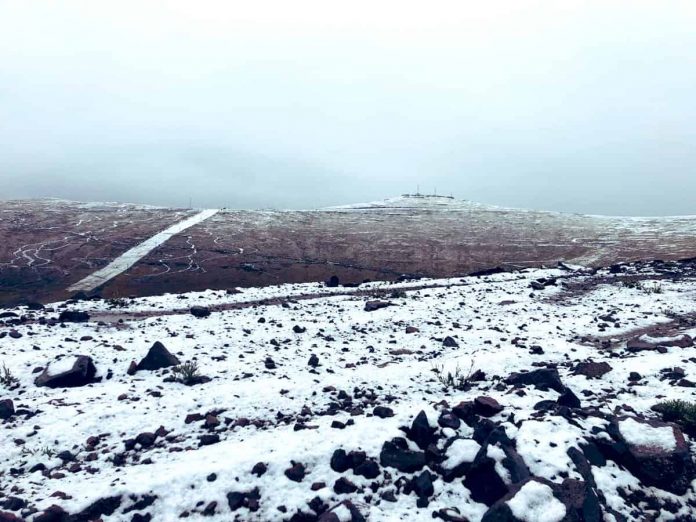 The snowfall over the western parts of South Africa on the night of Tuesday July 23 2019 and the adjacent interior may have stopped for now, but the cold and rainy weather is expected to continue.

“There have been confirmed snowfalls over Sutherland area and there is some snow on the top of the mountains of the Western Cape,” South African Weather Service (SAWS) forecaster, Henning Grobler told News24.

The SAWS warned of “disruptive snowfalls” over the Namakwa southern high ground and western high ground of the Western Cape mainly on Wednesday morning. Light snow is also expected along the Sneeuberg, Winterberg and southern Drakensberg mountain ranges of the Eastern Cape. But most damaging may be the wind.

“Yesterday there were fairly strong winds and we forecast some gale force winds. At the moment, the winds are back to normal – about 15 knots (25km/h – 30km/h),” said Grobler.

The SAWS predicted that maximum temperatures in Cape Town would remain in the mid-teens until Friday and another cold front was expected to pass over the western parts of South Africa.

According to Grobler, “we’re not going to get a break from the cold weather. It’s winter. There’s another cold front brushing past us tomorrow”.

The SAWS said that there would be high seas along the coast – about 6m to 7m between Cape Columbine and Coffee Bay. The Western Cape continues to receive significant rain which is helping to replenish the 44 main dams which supply the province, though water restrictions remain in place in several areas. According to the Western Cape government, the current water storage for the province is 49.8%, as measured on July 22. In Cape Town, water storage of the six major dams is measured at 69.6% on Wednesday.

Grobler said that there was significant rainfall, highlighting the Ceres station which received 100mm of rain over the last 24 hours, ending at 08:00 on Wednesday.

“Ceres was our champion”, added Grobler.

Most of the weather reports were facilitated by the satellite services provided at the weather stations, which helped to keep tabs on the snowfall and the volatile weather conditions. A number of weather stations, including Reenval SA, Storm Report SA, the SA Weather Service, provided regular updates on the winds, temperature fluctuations, rainfall and the rising of the seas, thanks to the availability of satellite data. There was also a report on Significant Rainfall and Current Dam Water Levels, as evidenced by data supplied by the City of Cape Town.

Photos sent in by Danny Els Light dusting of snow on the mountains 45km from Tarkastad towards Katberg pic.twitter.com/MmDlilaHaG

Extraordinary 24 hour #rainfall figures this morning. Widespread rainfall recorded with Ceres recieving the most in 24 hours with 100mm. pic.twitter.com/zgtkjjRX12

Morning satellite image (24 July 2019). Cold air over much of SA with the exception of the Lowveld where it will be warm to hot today due to offshore flow. Strong winds will continue over the interior with gale force winds along the south-east and east coasts. pic.twitter.com/jW7QFHtxKw

The situation in South Africa underscores the important of space to the African polity, and furthermore amplifies the case being made for increased investment in Africa’s space industry. It’s beyond weather; it goes to all facets of African existence. Life would become a lot easier on the continent, and disasters averted, if the space sector experiences significant expansion.