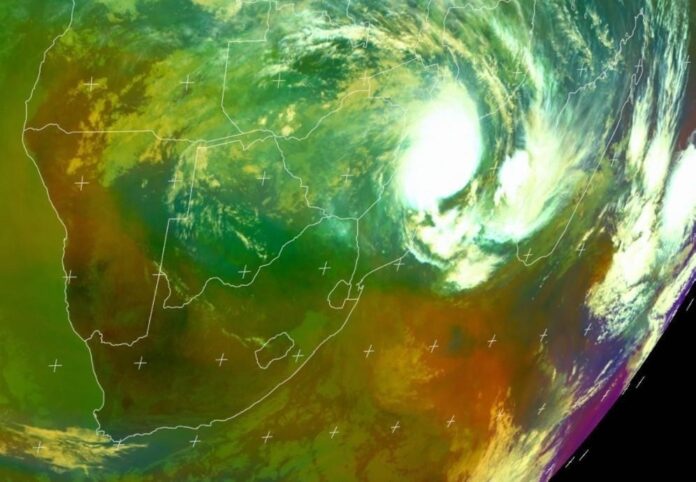 The prolonged spell of heavy rain and widespread flooding which tropical Cyclone “Eloise” brought to southern Africa, scarcely a month ago is still fresh in the minds of the general public. A fresh tropical system named “Guambe” has developed and is currently intensifying in the southern half of the Mozambique Channel.

We will recall that “Eloise” directly or indirectly resulted in significant damage to, and destruction of, property, roads and infrastructure, together with much flooding and the resultant loss of life across southern Africa, including South Africa during the latter half of January this year. By contrast, current predictions suggest that “Guambe” will have no
negative impacts on South Africa in the days ahead, as the system is expected to remain well to the east of our shores throughout the system’s life cycle.

“Guambe” is the seventh “named” tropical system in the SW Indian Ocean domain this season. It is currently classified as a Moderate Tropical Storm, with a central pressure of 990 hPa (hectopascal) but set to intensify in the coming days. As a Moderate Tropical Storm, “Guambe” is associated with sustained surface winds of the order of 63 to 89 km/h.

As at 14h00SAST, today Wednesday 17 February 2021, “Guambe is positioned at 21.4 degrees South and 37.5 degrees East, moving slowly southwards at 2 knots (3.7 km/h). Over the next 4 to 5 days, the track which “Guambe” is likely to follow should be predominantly southwards, constrained within 36 to 38 degrees east longitude (as seen
in Figure 2). This predicted track should keep the system well to the east of South Africa throughout the system’s lifetime. Beyond this period, “Guambe” can typically be expected to accelerate in a south-easterly direction, ultimately being absorbed into the predominantly westerly airflow of the mid-latitudes.

Whilst South Africa is unlikely to experience any negative impacts of “Guambe”, it is highly likely that a combination of torrential tropical rain and extensive flooding will affect an extensive part of the coast and adjacent interior of southern Mozambique, especially the region from Beira, through Vilanculos and southward to Inhambane. Moreover, destructive onshore winds and associated marine storm surge can also to be expected along the aforementioned coastline, with the coastal region between Xai-Xai and Inhambane likely to be affected by strong winds, wind damage and storm surge towards the coming weekend, when “Guambe” is expected to further intensify to “Tropical Cyclone” status, with sustained winds of 118 to 166km/h.

At the current time, it is improbable that “Guambe” will directly affect South Africa. Notwithstanding this, the South African Weather Service (SAWS) wish to emphasise that, as with all tropical systems worldwide, there is much uncertainty surrounding accurate prediction of “Guambe” ‘s future movement. Tropical systems are notoriously fickle and unpredictable, often exhibiting very erratic movement. Modern satellite remote sensing and advanced ensemble numeric modelling (NWP) techniques, do, however, mitigate much of this uncertainty, at least in the short-term. Notwithstanding the above, the general public can rest assured that SAWS will continue to be vigilant and closely monitor the future movement and evolution of “Guambe”. Further timely updates concerning this system will be issued as and when necessary.

Highlights Of The AfricaGIS Conference 2021 in Cote d’Ivoire