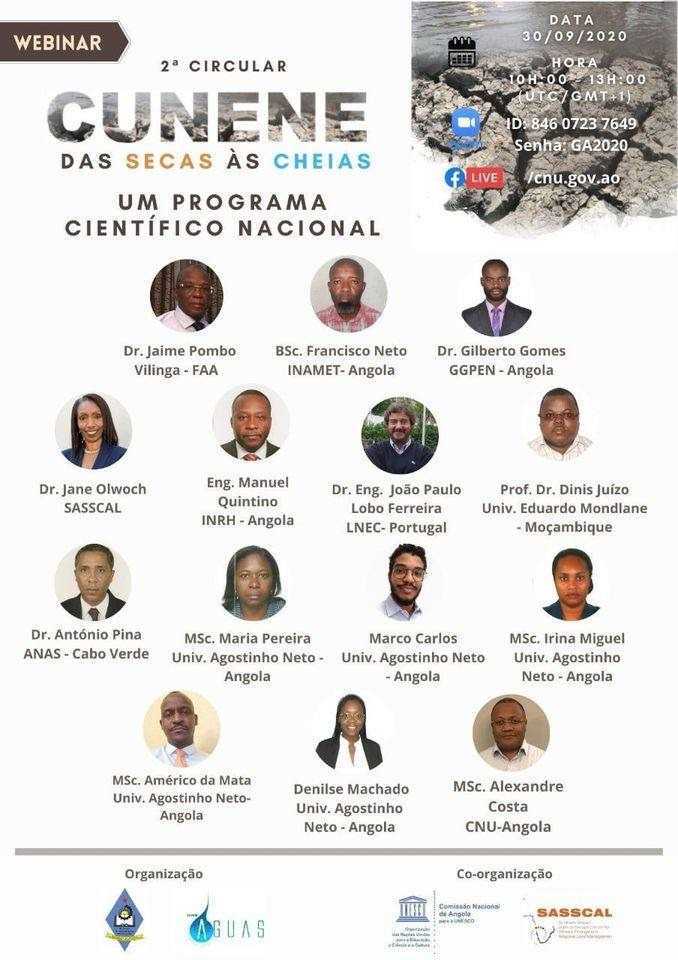 The National Space Program Management Office of Angola (GGPEN), will be part of a group of speakers, in the videoconference on the theme “Cunene, from Droughts to Floods: a National Scientific Program”, to be held on September 30, 2020, on the ZOOM digital platform, starting at 10 am and ending at 1 pm (local time).

The event is part of the celebration of the 98th Christmas anniversary of the patron of Universidade Agostinho Neto (UAN), to be held by the Water Group of the Department of Geology, Faculty of Sciences, UAN, in partnership with the Permanent Secretariat of the National Commission from Angola to UNESCO, and the Southern African Center for Science and Services for Adaptation to Climate Change and Sustainable Soil Management (SASSCAL).

This videoconference is aimed at the scientific community, specialists, professionals, students and enthusiasts interested in the topics presented and aim to present and discuss results of scientific research, as well as new lines of scientific research in the field of integrated resource management in semi-arid and arid areas of southern Angola.

During the event, the results of the projects carried out by different authors dedicated to the themes related to water resources will be presented, as well as the lines of scientific research in the field of integrated management of water resources, initiated by the Water Group of the DEI of Geology and directed to the Cunene region and transboundary areas in which the Cuvelai, Cunene and Cubango (Okavango) watersheds fall.

The GGPEN will be represented by Dr Gilberto Gomes, a member of the International Scientific Project team under development at the institution. The project is called “Angola Drought Monitoring” and is in partnership with the Massachusetts Institute of Technology (MIT), United States of America, Tokyo University in Japan, and International Space University in France.

The aforementioned scientific research project aims to acquire the necessary data for the monitoring of drought and management of water reserves in the south of the country in particular and in Southern Africa in general, through the use of a satellite data mining system.

This study aims to identify the sources of surface water, determine the rate of soil cover, population density, analyze the rainfall history in the region, vegetation rates, predict and monitor drought.

The Satellite Drought Monitoring System project is an initiative of the Ministry of Telecommunications, Information Technologies and Social Communication (MINTTICS) under the execution of GGPEN, to meet the needs of the populations of southern Angola, especially in the province of Cunene, which experienced extreme drought between 2015 and 2019, considered as the most critical episode in the last 35 years, resulting in the death of more than 30 thousand animals, including cattle, goats and pigs, with 857,443 people from 171,488 affected families.

GGPEN Selected for the Malawi Drone and Data Academy Program

As part of the selection process for participating in the Drone Assembly, Operationalization and Processing Course, UNICEF, in partnership with the University of Science of Malawi, and the University of Technology of Virginia (USA), is creating the first Drone and Data academy African (African Drone and Data Academy, ADDA), whose objective is the creation of a centre of excellence that equips young people in Africa with 21st-century skills through drone flight and data analysis.

Additionally, admission to that course is highly demanding and competitive. The GGPEN specialist, Atanilson Cachinjumba, was selected in the course and will join the distinguished and diverse group of young Africans who will be able to contribute to their local communities from the knowledge and experience gained in this program. 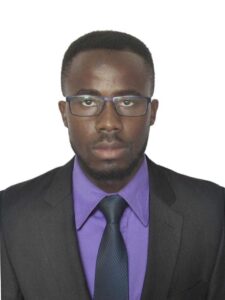 The course will start on September 28 and will end on October 30 of this year. Classes will

be taught in the first phase via teleconference.

Born in the province of Bié, em Angola, Atanilson Tucker Cachinjumba, 25 years old, took a high school degree in Informatics at the National Telecommunications Institute (ITEL), finishing in 2012. He completed a higher degree in Aerospace at the University of Manchester, 17th Best University in the United Kingdom, 27th best University in the world, and graduated “first class with honours”. Since 2019, he has been part of the GGPEN team.