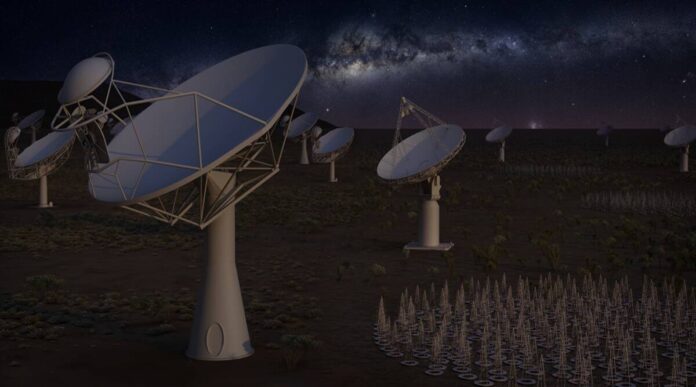 The African Astronomy Society (AfAS) and the International Astronomical Union – Office for Astronomy Development (IAU-OAD) organized a special session within the ongoing Africa-Europe Science and Innovation Summit. The session was titled “Africa EU Astronomy Collaboration: Towards the First IAU General Assembly on the African continent in 2024.” The special session offered an essential opportunity for interaction between existing and potential Africa-EU collaborators. Consequently, this opportunity was to stimulate and explore mutually beneficial options “that may arise specifically in the lead up towards the IAU-GA in 2024”.

This article merges the excerpts from the above special session and two other sessions on the Square Kilometre Array (SKA) project.

During this session, Mirjana Povic of the Ethiopian Space Science and Technology Institute (ESSTI) enumerated several ongoing astronomy projects in collaboration with Europe. Some of these projects include the building of the following telescopes and observatories:

Furthermore, Mirjana revealed a collaboration between Observatoire National des Aurés in Algeria and the European Virgo. This collaboration is to follow up gravitational wave detections optically. Furthermore, in fostering such a partnership between Africa and Europe, Mirjana suggested more extensive long-term agreements between Europe and Africa. This naturally would fall under the purview of the African Space Agency once operationalized.

In addition, regarding Human Capacity development, Mirjana Povic revealed that the IAU OAD has funded over 50 projects with over USD 303,000. Also, hundreds of MSc students have received training through the National Astrophysics and Space Science Programme (NASSP) in South Africa. Melvin Hoare also added that the Development of Radio Astronomy in Africa (DARA) will have trained over 300 young persons by the end of 2021.  Furthermore, Christiana Gmiro discussed training programs across 8 African countries, highlighting the 228 students trained between 2015 and 2019 and the projected 367 trained students by the end of 2021. She also spoke about the global VLBI alliance formed by the established VLBI networks to foster a truly international collaboration for VLBI.

The Open Science Principle and the SKA Project

In a different session, Lourdes Verdes-Montenegro of Instituto de Astrofísica de Andalucía (CSIC) discussed the Open Science principle. She adopted the European Commission definition of Open Science – Open Science represents an approach to collaborative, transparent, and accessible research. Thus, she explained why the Square Kilometre Array (SKA) Project needed to adopt this principle. Consequently, she suggested that a network of interoperable SKA Regional Centres should provide:

through a platform that:

And lastly, user support to enable scientific exploitation of the SKA data.

In this session, a postdoctoral fellow at Square Kilometer Array Observatory, Phillipa Hartley, discussed the Science Data Challenges (SDCs) primary aim. According to her, this is to familiarise the local science community with the size and complexity of Square Kilometer Array data which can help drive the development of analysis techniques that would support the design of future SKA projects. She also mentioned the importance of collaborations with international organizations and African partner countries’ High-Performance Computing facilities that host large simulated datasets in an accessible way. These partners include; SKA France, the National Institute for Astrophysics (INAF, Italy), and much more.

Goerge Miley also spoke extensively about the Low-Frequency Array (LOFAR) and how to combine science with capacity building within EUNAME (Europe, North-Africa, Middle East). In addition, he discussed the trans-European international LOFAR telescope, which is a European research infrastructure consortium. To further understand the galaxies, clusters of galaxies, stars, and the ultra-high-energy explosive phenomena, Goerge added that the consortium had made considerable improvements to enhance the resolution and sensitivity of the antennas. He also discussed the role of LOFAR in technology and educational capacity building which directly aligns with seven Sustainable Development Goals.