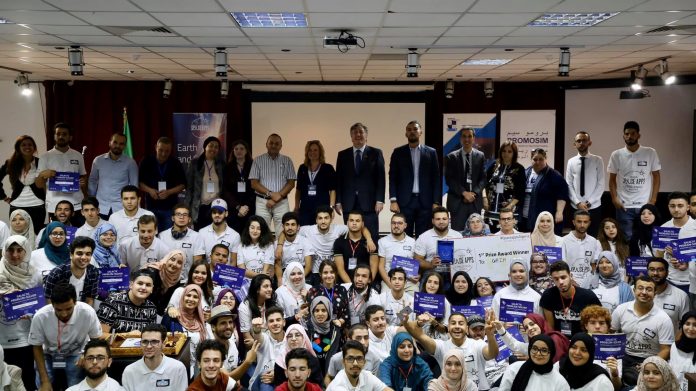 The groups: SA7, ESISTronauts, GAiA, each offered innovative solutions to this year’s challenges.

The first group, SA7, made up of seven team members, tackled the challenge, Spot The Fire V2.0,  focused on creating an application that leverages NASA’s near-real-time and archival wildfire datasets along with other tools to support firefighting and fire mitigation efforts, by building a Mobile App, FlaminGo, which is both an API and a platform dedicated to spot fire and help people avoid its damage by forecasting, alerting societies and saving those in need. This app won the position of the local people choice winner.

The second group, GAiA, a nine-member team, worked on the solution for Trash CleanUp, a  challenge centred on oceanic garbage patches, which have devastating effects on ocean ecosystems,  by designing a mission to help clean up such garbage from the ocean. Their innovation was a machine, a-one-kilometre (1km) half tube equipped with solar panels on the outer surface and two built-in electrical carpets on the inner surface. One is vertical to bring the debris from the surface of the ocean to the second horizontal carpet that transfers the garbage to the two ships residing on both sides of the tube. It also involved a dynamic net which collects the garbage from underneath, and the use Pro-Fish device attached the ships to send sound frequencies to alarm fishes to stay away from the cleanup path. The group received a global nominee for its project. The group also offered ways to convert the garbage to useable energy.

The game currently at its third level includes a level which explores the telescope of James Webb, its components and its mission, known as “Construct”. This telescope is viewed in 3D from inside and outside and at the end of the level, the player will have a puzzle to reconstruct this telescope.

The second level is launching and landing space “Launch”. The user can interact with the launching of the spacecraft and the generation of James Webb telescope, the spacecraft from inside and outside and the astronauts.

The third level is the most interesting one. The player can choose the planet or the galaxy to go and also the period of construction of this destination. Data collected by AAA James Webb’s telescope has been described as essential for planning NASA’s future human and robotic mission to space.

As a kids-friendly game, it also has a virtual assistant to guide kids through the entire experience. Kids have the choice of own assistant, which can be a favourite cartoon ( Sponge Bob, Spiderman, Dora) and more.

The International Space App Challenge, now in its eighth year, is an international hackathon for coders, scientists, designers, storytellers, makers, builders, technologists, and others in cities around the world, where teams engage with NASA’s free and open data to address real-world problems on Earth and in space. Space Apps 2018 included over 18,000 participants at 200 events in 75 countries.

This year’s event was held in Algeria from 18-20 October 2019 at Khibra Academy in Blida by the communication agency Innocom conjunction with NASA.

The Egyptian Space Agency Is Hiring For Multiple Positions