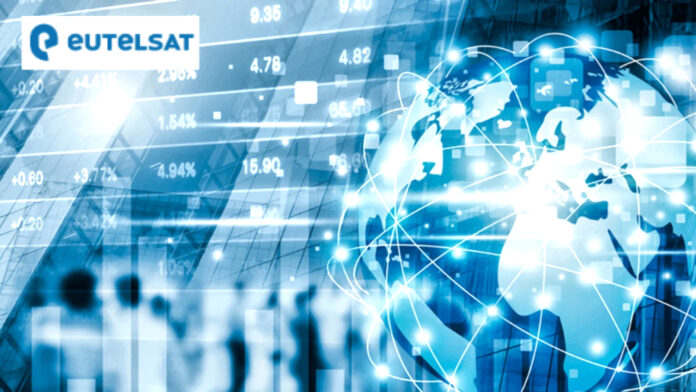 In the third quarter of 2021 financial year (FY), Eutelsat reported total revenue of EUR 301.3 million, a 6.4% drop from EUR 322 million reported in the same period of the previous year. The Operating Verticals Revenue stood at EUR 294.4 million, an 8.9% drop on the reported basis and 6.1% on a like-for-like basis, excluding a positive perimeter effect of circa 0.6 points, with the most massive decline being in Mobile Connectivity and Data and Professional Video segments, impacted by COVID 19 restrictions.

Africa contributes to four out of the five Eutelsat’s operating segments. In its last financial year results, Africa contributed to 7.7% of Eutelsat’s revenues, at EUR 98.2 million. Eutelsat is hoping to maintain its growth and distribution capabilities across Africa through contracts with Vox in South Africa, the testing of wholesale distribution with Orange in DRC, and the recent agreement with Facebook to accelerate the rollout of express Wi-Fi hotspots, a proven solution for community Wi-Fi.

The third quarter has seen some noteworthy operational milestones, notably the outcome of the Spring renewal campaign with the US administration, with a record-high 95% renewal rate, well above the historical average. Also, the EUR 4.5 billion backlogs up 6% year-on-year reflects our important recent commercial win”, Rodolphe Belmer, CEO of Eutelsat, said.

Rodolphe further emphasised: “Eutelsat KONNECT operating at full coverage has led to substantive growth in retail operations in new territories across western Europe. Also, the partnership with Facebook to provide express WiFi hotspots has increased our presence in Africa. The outturn of our Third Quarter revenues performance is entirely in line with our expectations. It enables us once again to raise the bottom end of our objective range for the year whole and to reconfirm all other elements of our financial guidance.”

The third quarter broadcast revenues, which amounted to EUR 182.0 million, about 62% of the revenue, is down 6.8% year-on-year. They reflect the impact of the renegotiation of contract terms with Greece’s Forthnet and the anticipated broad slowdown in the pace of new business against the current operating backdrop affecting distributors, resulting in lower revenues in Europe.

The report, available here, highlights a drop in revenues by 2.8% on a quarter-on-quarter basis. The Fourth Quarter is expected to return to stability at a broadly stable level compared to the Third.

Eutelsat signed a multi-year contract for capacity on the EUTELSAT 172B satellite with New Zealand’s mobile operators to provide 4G mobile backhaul services to the Chatham Islands.

In April 2021, Eutelsat signed an agreement to become a leading shareholder of OneWeb alongside the UK Government and Bharti Global, securing a compelling entry point to address the considerable Low Earth Orbit (LEO) opportunity.  Eutelsat will invest USD 550 million in OneWeb, with closing expected in H2 2021, subject to regulatory authorisations.

On April 30 2021, Eutelsat closed the transaction with the KASAT satellite operator; Viasat to dispose of its 51% stake in Euro Broadband Infrastructure (EBI) and related European broadband business.

Following the relocation of the former EUTELSAT 7A satellite, a multi-year multi-transponder agreement was signed with Global Eagle for capacity in inclined orbit at the 139°West orbital position highlighting the strength of Eutelsat’s in-orbit resources and underlying demand on the Aero Mobility market.

Eutelsat also procured the EUTELSAT 36D satellite to succeed EUTELSAT 36B, expected to reach its end of life at the end of 2026, at its key 36° East orbital position. EUTELSAT 36D will assure all the main legacy missions of EUTELSAT 36B in Broadcast (Africa and Russia) and government services (EMEA and Central Asia), with enhancements to coverage areas and performance.

Growing the African Space Ecosystem from the Ground Up: A case study of South Africa