On Friday August 16, 2019 the Director General of the Ethiopian Space Science and Technology Institute (ESSTI), Dr. Solomon Belay Tessema, granted an exclusive interview to Space in Africa. In an hour-long conversation, he disclosed relevant information on the Institute, the role of the Ethiopian government in promoting space technology, ongoing projects in the Ethiopian space sector and future plans to advance the cause of space science on the African continent.

On the issue of technological and financial challenges in launching Ethiopia’s first Earth observation satellite, Tessema said, “Plans are going well so far and there are no major challenges. The financing of the project in itself is being partly covered by the Ethiopian government, particularly in respect of construction of ground-based control and command stations, third Party insurance of satellites,  as well as covering the travel expenses of our engineers trained and getting experience in China . The manufacturing of the satellite and continuous training of our staff is also partly funded by the Chinese government. Everything is going according to plan: the assembly is finalised, work on the ground station is completed, and more equipment is on its way from China.

On the question of the proposed launch date, he replied: “There would probably be a little delay because of rainfall in Addis Ababa to check and test the ground-based station. We are still expecting more equipment (such as antennas), and there is also need to set up the receiver station. Construction is ongoing, but we are waiting to test it. From the look of things, we may have to shift the launch date from late September to the first week of December, to avoid any margin for error”.

Tessema also responded to inquiries pertaining to the communication satellite agreement signed with China in May, stating that “in general, communication satellite is a critical problem for Africa, and in particular, a major challenge in Ethiopia. We conducted a feasibility study two years ago, and last year there were policy changes in Ethiopia which provided more room for the country’s private sector to invest in space, and also provided for expansion of the media. We signed the Framework Agreement with China last May. This framework agreement entails that we have to collaborate on financing the construction of communication satellites, and also on checking the standards for business models in Ethiopia. We revised the details of the feasibility studies, and we have made forecasts for the next 15-20 years. The project is going smoothly, as the government and the private sector are more interested in what’s going on lately. We expect to launch these communication satellites soon enough”.

“The project is being run by the Ethiopian government. However, we have been careful not to place too much burden on the government, as it is involved in many other projects across the country. I can’t provide much information on further financing and the pace of the project at this time, but I will communicate in the future. We would be officially launching the communication satellite project this year”, he added. 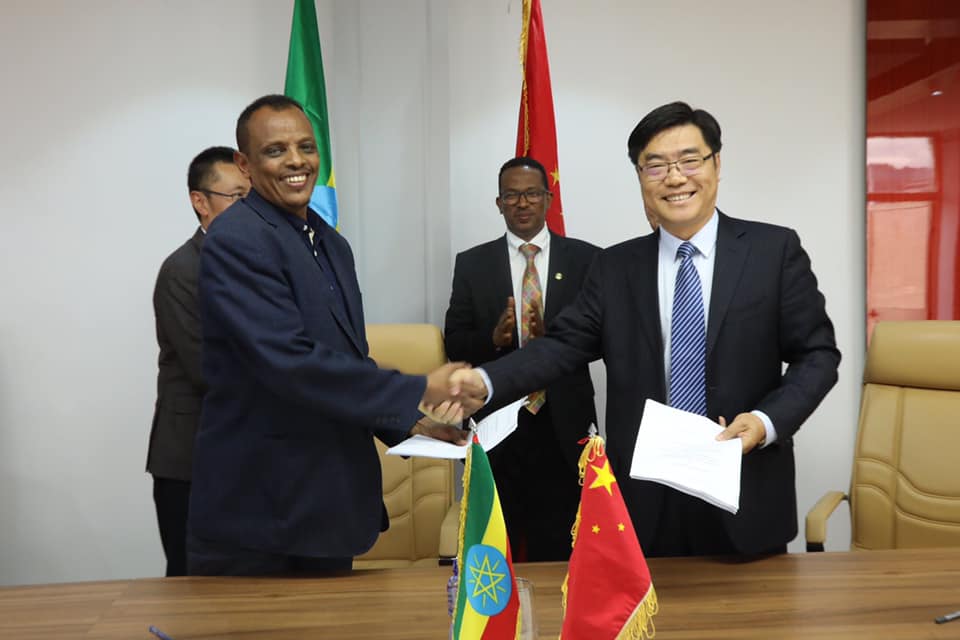 On the subject of collaborations with other African countries and organisations, he noted that “we have two big projects in respect of Earth observation in Ethiopia: the first is the launching of the satellite, and the second is the building of Multimission – a receiver station – for a wide range of satellite data usage purposes. We plan to finish building the receiver station in the first quarter of 2020. We are open to working with neighbouring countries, and we are in the process of creating a huge platform for more collaboration. Space needs to operate on an international scale, and our priority is to get more people working with us at regional level”.

Tessema also indicated that there was room for private organisations to invest, hinting that “currently communication satellite will be fully owned by the government, however, the involvement of the private sector in space business in general, and space commerce in terms of satellite products and services in particular, is encouraged as stated in Ethiopia’s national space policy. Our space policy and strategy encourages involvement of the private sector in the space industry, however private organisations who seek to work on projects such as building satellites would need to obtain licenses and permission from the government. We won’t allow private institutions to launch satellites in the near future; our focus is on collaborations for now. Again, Ethiopia is in dire need of a communication satellite, and only our Institute is charged with the responsibility of building and coordinating such projects. Stakeholders are working closely in respect of this”.

When Space in Africa asked him about the role of the Ethiopian government and the institute in encouraging startups, he replied thus: “We have clear strategies and policies that make room for involvement of the private sector. Our space programme has three components: the civilian space programme, the military-security space programme (for peaceful use), and the commercial space programme. In space commerce for example, private organisations are encouraged to invest. They could also join the effort in creating more jobs in the space industry. Ethiopia as a country is highly investing in optical and radio telescopes with a view to being second to Chile in this regard, and that goes to show how much we encourage the involvement of the global private sector.

“We also think that the private sector can set up industries that promote space exploration and space instrumentation as well as space tourism, and equally engage in discussions with the government to promote space technology. There are a number of private organisations actively involved in space data mining and distribution. In some African countries, the private sector is involved in the development and launch of Earth observation satellites, so we encourage the private sector to invest in the establishment of more space testing centres and other facilities”.

“We are currently identifying the perfect location. One of our long-term plans is the establishment of a launching centre, which would be used by other countries too”, he added, hinting at the Institution’s plans to build a launch pad.

He further disclosed that the Ethiopian government’s support  and investment in space was significant, saying that “in the space sector, the government fully  allocates the budget. At present, Space activities in Ethiopia are wholly run by the government. The ESSTI has more than 125 staff members, and every activity in the Institute is wholly financed by the government. Across different universities, all space activities, from research to training of Master’s degree and PhD students, are supported by the government. This is in accordance with national policy and hence, technology and the economy are the key priorities of the Ethiopian government. The current prime minister is very interested and has direct involvement as well as a supervisory role in the implementation of space policies and the advancement of technology. The country’s space programme is not faced with any problems when it comes to financing by the government. However, we need more expertise; it takes time to train engineers”.

“A sufficient allocation is made in the government budget for the projects and programmes being conducted in the new fiscal year, and more funds are to be allocated based on the demand and progress of the project”, he added.

When Tessema was asked about the relevance of the Memorandum of Understanding (MOU) recently signed with France, he said: “The MOU signed with the French Space Agency is for three purposes: to collaborate on space climate matters and exchange high resolution data, additional capacity building for Ethiopian professionals, and working together in different space programmes”.

There were also questions as to the Institute’s willingness to employ expatriates, to which he replied: “we always advertise vacancies for positions, and people outside the country are eligible to apply for these positions. We are interested in engineers who have 3-5 years of relevant experience”.

On the rationale for scheduling multiple space-related conferences in Addis Ababa within the last quarter of 2019, Tessema opined that “Ethiopia is the capital of Africa. It is the home of all Africans. Africans should come to Addis Ababa a lot more often. We are also active in the space programme, and it is a good time to talk about space resources and collaboration in Africa. Furthermore, Ethiopia is a good place to study astronomy, partly because of the weather conditions, which is why some strategic meetings relating to space science and astronomy will be taking place in the country. Ethiopia is now ready to share its space-related experiences with Africa and the rest of the world”.