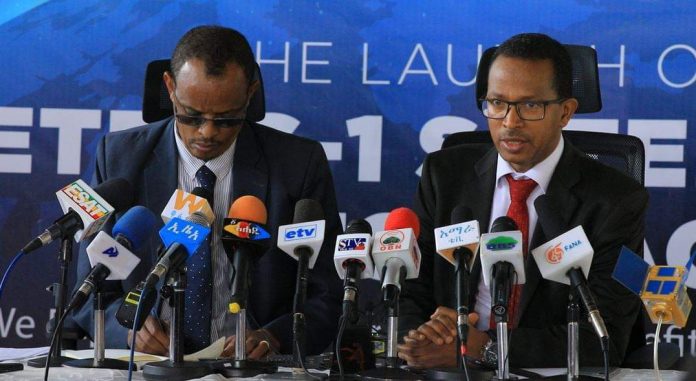 Ethiopia’s first-ever satellite, ET-RSS1, is going to space on 17th Dec 2019 20 December at 03:21 GMT, according to the Ethiopian Space Science Technology Institute (ESSTI).

The news was disclosed today during a joint press briefing by the Minister of innovation and Technology, Dr Getahun Mekuria, and the ESSTI General Director, Dr Solomon Belay.

The 70kg multi-spectral remote sensing satellite will blast off into space from China, with its ground station located in Ethiopia at the Entoto space observatory facility.

“Once launched into space, the satellite is expected to monitor the environment and weather patterns for better agricultural planning, drought early warning, mining activities and forestry management,” Dr Belay told Space in Africa in an earlier exclusive interview.

He said the satellite was built in collaboration with Ethiopian engineers, who were trained from the scratch, and has made way for the exchange and transfer of knowledge and technology between Ethiopia and China.

In April this year, the Ethiopian Prime Minister, Abiy Ahmed, visited the China Academy of Space Technology, the prime developer of the satellite, to inspect work done on the project.

In related news, the Ethiopian government has reached an agreement with French space company, ArianeGroup, to commence the construction of satellite manufacturing, assembly, integration and testing (MAIT) facilities in Addis Ababa in January 2020 with a completion timeline of 30 months.

XinaBox, Quest for Space To Send Experiments To The International Space Station