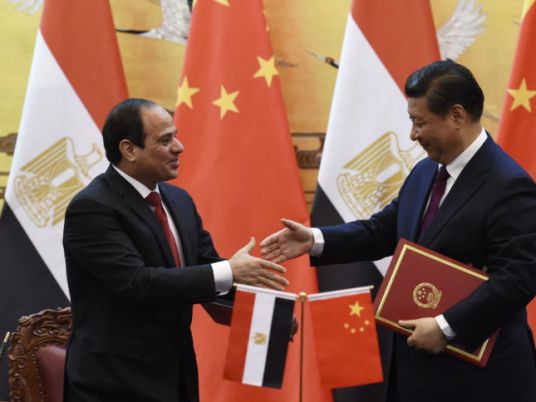 Egypt and China signed Monday a grant worth $45 million for the EgyptSat-2 project for remote sensing applications.

The grant was signed by Egyptian Minister of Investment and International Cooperation Sahar Nasr and Ambassador of China to Cairo Song Aiguo, in the presence of Minister of Higher Education Khaled Abdel Ghafar and representatives of the National Authority for Remote Sensing and Space Sciences.

The Ministry of Investment clarified in a statement that this grant comes to perfect the satellite collection project’s grant which amounted to $23 million, in cooperation with the Chinese Space Administration.

Nasr said that this grant affirms the strength of the strategic relationship with China especially in information technology and scientific research sector.

“This project aims at transferring Chinese technology in the satellite sector to serve the purposes of research projects and remote sensing,” she noted.

She emphasized the importance of cooperating with China in this field in light of the establishment of the Egyptian space agency.

Regarding the Egyptian-Chinese relationship, the minister stated that China is one of the closest partners to Egypt as it executes several development projects.

These projects are: Fish Collection and Integration Tests Center, a training center in the Suez Canal Economic Zone to provide a highly trained workforce to meet the requirements of industries and foreign investment in the Economic Zone, the Luxor Opera House project, and the development of the distance learning system “the first two phases”.

Recently, the investment relations between the two countries witnessed a progress as the Chinese firms in Egypt are now ranking the first in fields of information technology, electricity, communication and transport with a total of 1,558 companies.

Minister of Higher Education Abdel Ghaffar said that the agreement stipulates to train a number of Egyptian cadres in China on remote sensing, and to construct a satellite gathering center in the Egyptian space city.

For his part, the Chinese ambassador to Cairo clarified that the upcoming period will witness a progress in the Chinese investments in Egypt, noting that China is keen to transfer its expertise in the field of satellite manufacturing and operation technology.

He added that the satellite project will contribute in supporting Egypt’s regional leadership in the field of space and scientific research.

Aiguo also praised the improvement of the investment climate in Egypt which encourages the Chinese investors to pump new investments in the country during the upcoming period.

Egypt embarked on a bold economic reform program in 2014 that includes floating its currency to lose about 50 percent of its value, cutting energy subsidies and introducing new taxes to cut the budget deficit.

The law also stipulates that foreign employees should not exceed 20 percent of the total number of workers in the projects established by non-Egyptian investors.

Moreover, the bankruptcy law regulates the financial and administrative restructuring for failed projects and companies, eliminating prison sentences in bankruptcy cases and limiting punishments to a monetary fine.

It also aims to minimize the need for companies or individuals to resort to the courts and to simplify post-bankruptcy procedures.