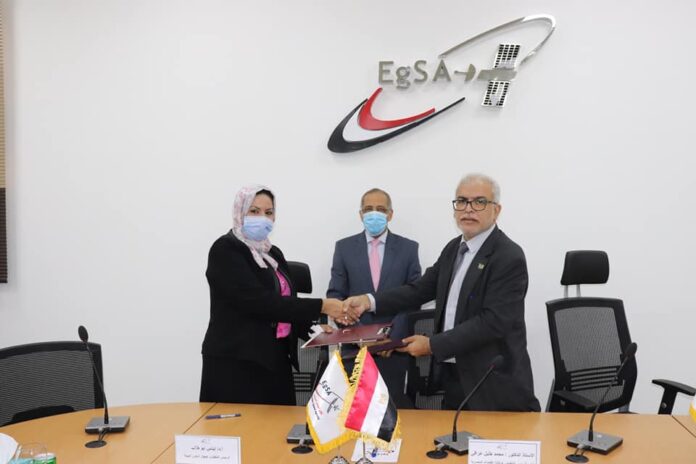 The Egyptian Space Agency on Tuesday announced that it signed a cooperation protocol with the Egyptian Ministry of Environmental Affairs to study the impact of climate change on Egypt. The head of the agency, Dr Mohammed Al-Qusi received the CEO of the Environmental Affairs Authority, Dr, Inas Abu Talib and his delegation at the Space agency headquarters.

Dr Mohammed praised the efforts of the environmental ministry and reported the agency’s willingness to cooperate with them on the study of Climate change in the nation as they know its demands, and are responsible for implementing these demands as they link to the sustainable development goals. Dr Inas, in turn, explained the roles of the ministry and expressed his happiness to work with the agency to serve the Nation.

Earlier this month, the Head of the team developing Misr-Sat 2, Haitham Medhat, stated in an interview that the satellite will be launched in 2022. He further explained that work on the project began in 2019 but got delayed due to the COVID-19 outbreak.  The satellite will be launched by China and is designed to remain in space for five years. The mission of the satellite is imaging Egyptian soil to preserve the environment and undertaking remote sensing.

Egypt’s large population is known to make the country extremely vulnerable to climate change. Moreover, its densely populated Nile delta is seriously threatened by sea-level rise. Climate change will also have an impact on citizens’ health, and studies have been undertaken in an attempt to analyze possible adaptation measures. Vulnerability assessment studies in priority sectors have been undertaken as part of the process of developing the national action plan. The studies have indicated that the following areas are the most vulnerable in order of severity and certainty of results: agriculture, coastal zones, aqua-culture and fisheries, water resources, human habitat and settlements, and human health.

Egypt is a unique country with respect to its water resources. More than 95% of the water budget of Egypt is generated outside its territory. Any decrease in the total supply of water, coupled with the expected increase in consumption due to the high population growth rates will have drastic impacts. Water management is thus one of the most important adaptation actions. Adaptation of supply includes measures to improve rain harvesting techniques, increase abstraction of groundwater, recycle water, desalinate water, improve its transportation and rationalize its use. Meanwhile, the adaptation of demand requires minimizing the need for water and optimizing the economic return of its unit volume.