The Egyptian Space Agency (EgSA) has signed an executive agreement on March 3 2022 with the Egyptian University of Science and Technology to collaborate on space science and technology development.

The agreement was signed in the presence of the Executive President of the EgSA, Dr Mohamed Al-Qousi; the Vice-President of EgSA, Dr Mohamed Khalil Iraqi; the President of the Egyptian University of Science and Technology, Professor Dr Ashraf Haider Ghalib; the Vice President the University of Quality Affairs, Professor Dr Abdul Qadir Abdul Karim Ibrahim; the head of the Faculty of Engineering, Dr Karim Al-Dash. Other attendees of the event include top personnel from the Faculty of Engineering, students of higher studies, the University’s heads of departments, faculty members and several university students. 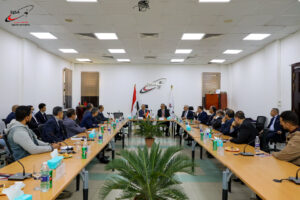 The Vice President of EgSA,  Dr Mohamed Khalil, took the visiting group on a tour of the satellite assembly and testing centre, the first of its kind in North Africa. Dr Khalil also showed the group around EgSA’s satellite systems testing factories. 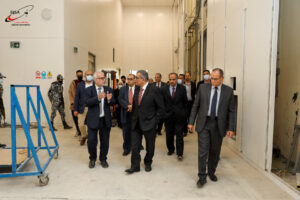 In his opening remark, Dr Mohamed Al-Qousi welcomed Professor Dr Ashraf Haidar and reiterated that the agreement between the two bodies falls within the framework of the human capital building in space science and technology across Egyptian Universities. In addition, he mentioned that the plan is to ensure a steady pipeline of capable hands in the Egyptian space ecosystem and contributes to the country’s vision 2030.“The agreement would help foster collaboration between university students, teachers and experts from the EgSA to understand the nature of the design, manufacture and operation of satellite systems”.

Professor Dr Ashraf Heidra expressed his happiness with the visit and his great admiration for the capabilities [human and technological] of EgSA and the efforts made to implement the educational satellite projects across the country. Furthermore, he emphasised that cooperation is an excellent investment for the Egyptian Universities of Science and Technology students.

A lengthy dialogue was held between the delegation of the University of Egypt for Science and Technology, Dr Al-Qousi, and other agency leaders about areas of cooperation that can be built according to the protocol. For instance, both parties will collaborate to establish a centre for space science and technology development at the university, including a summer training program that would be organised for students to improve their knowledge about satellite development. Also, there was a discussion about implementing a space science research project which would bring together teams from the EgSA and the Egyptian University of Science and Technology. To this end, Professor Dr Ashraf Heidra and the head of the Faculty of Engineering, Dr Karim Al-Dash, promised to invite other surrounding Universities to participate in the planned summer training programme.

It is worth noting that the Egyptian Space Agency specialises in positioning the general strategy of the Egyptian state in the field of space science and technology. This is achieved by developing the required technology improving the human resource within the Agency to meet up with the new technology trend. Similarly, EgSA is focused on supporting research and educational programmes in space science and technology and encouraging the utilisation of such programmes to develop solutions for the benefits of all Egyptians, and by extension, Africa.