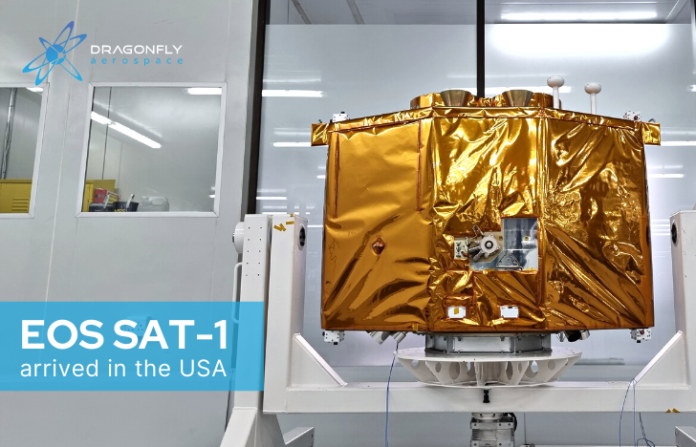 EOS SAT-1, the first imaging satellite to be built by Dragonfly Aerospace, has left the Dragonfly Aerospace design and manufacturing facility in Stellenbosch, South Africa and is now in SpaceX’s launch site in Cape Canaveral, Florida for pre-launch testing ahead of the Transporter-6 mission scheduled to launch in December 2022.

The satellite, which was fully manufactured by Dragonfly Aerospace in South Africa, is the first of a seven-satellite constellation in LEO for EOS Data Analytics. Furthermore, itwill be the world’s first agriculture-focused satellite constellation, providing the agriculture and forestry industry with high-quality data to support efficient and sustainable practices. The remaining six satellites of the constellation will be deployed over the next three years by 2025.

In 2021, EOS Data Analytics signed an agreement with Dragonfly Aerospace to use the latter’s new 100kg class µDragonfly satellite bus as the platform for the two DragonEye electro-optical imagers to equip the satellite to provide a 44km swath panchromatic and multispectral imagery across 11 spectral bands at close to 1 m resolution – making it one of the most powerful satellites in LEO.

Data obtained from the EOS SAT-1 will deliver valuable information for harvest monitoring, application mapping, seasonal planning and assessments that analyse information such as soil moisture, yield prediction and biomass levels, which will in turn support growers in reducing carbon dioxide emissions and help them to develop sustainable agricultural methods without financial losses.