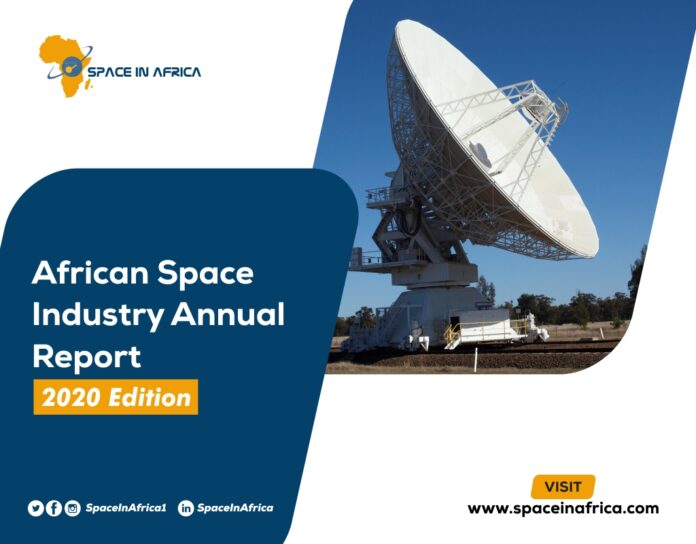 Space in Africa, the authority on news, data, and market analysis for the African space industry, has released the 2020 Edition of the African Space Industry Annual Report. The report builds on the 2019 industry report, which reported that the industry is over USD 7 billion of annual revenues and is projected to grow at a 7.3% compound annual growth rate to exceed USD 10 billion by 2024. 2019 was the best year in the history of the African space industry with over USD 717 million spent on satellite projects. To date, over USD 4 billion has been spent on satellite development and launch in Africa.

The sector is seeing the emergence of new government space programmes with the governments of Egypt and Rwanda establishing fully operational space agencies during the 2nd half of 2019 and 1st half of 2020. With other countries announcing their national space programs, this translates to an increase in national budgetary allocations for space. For 2020, African governments budgeted USD 490 million towards their space programmes compared to USD 250 million from the previous year, excluding capital expenditures on the acquisition of satellites.

Satellite programmes on the continent were greatly constrained in 2020 in terms of budget constraints, disruption in production and logistics, and unstable international outlook as a result of the coronavirus pandemic. However, this has not hindered the long-term objectives of most satellite programmes by governments and the commercial space sector. In some instances, the pandemic facilitated the need for re-evaluation of existing solutions in favour of more robust space-enabled solutions.

Satellite-enabled products and services dominate the African commercial space economy with most of the revenue-generating segments controlled by global and regional communications satellite operators. The industry has a nascent upstream sector involving African-grown small satellite systems and payload manufacturers and a maturing downstream sector comprised of satellite services providers offering satellite internet broadband, broadcast and media, EO and geospatial data, GNSS, fixed and mobile asset tracking, and maritime surveillance, alongside ground station and equipment manufacturers. Africa sees considerable growth in space science and astronomy products and services, primarily driven by demand from government and academic institutions as a result of increasing multimillion-dollar investments in observatories and telescope projects across the continent.

As of July 2020, 19 African countries have established or began the process of creating a space programme. Of these 19 States, 15 have signed the Outer Space Treaty, 14 have signed the Rescue Agreement, 12 have signed the Liability Convention, four have signed the Registration Convention, and only Morocco has signed the Moon Agreement. These trends highlight Africa’s growing adoption of policies and international conventions to promote the development of national or continental space initiatives. For instance, the newly established Rwandan Space Agency focused more on drafting a national space policy before the establishment of a space agency. More African countries are beginning to acknowledge the success of space programmes as being partly influenced by the structure and support of an underlying policy and strategy. Tunisia and Senegal have reoriented their ambitions towards drafting policies, Nigeria is revising its space policy and strategy, and South Africa, noting the current developments in the space arena, is tabling a new bill to stay abreast of industry expectations.

In 2015, the Sustainable Development Goals document was submitted to the United Nations and was ratified by partner countries. In 2016, countries started implementing goals across the world. African countries, having participated actively in the execution of the Millennium Development Goals, are also top participants in the SDGs execution race. To achieve the SDGs, many countries are looking to space towards the implementation of the goals. In the last two years, Africa has executed several SDGs projects using space technology in line with the UN SDGs and the Africa 2063 Agenda.

The African Union Commission continues to pursue a continental space programme following its enactment of the African Space Policy and approval of the African Space Strategy as well as plans to operationalise the African Space Agency. There is an increasing trend in interest and strategies of foreign governments in an attempt to claim a significant market share of Africa’s growing space industry and, in some instances, maintain a geopolitical dominance of the sector as a vital diplomatic or military alliance. The report highlights China, European Union, Japan, France, Russia, the United Kingdom and the United States of America as case studies across commercial, development and diplomatic fronts.

This 2020 edition of the Africa Space Industry Annual Report is published by Space in Africa, the authority on news, data and market analysis for the African space and satellite industry. It presents data and analyses on projects, deals, partnership and investments across the continent. It also provides analyses on the growing demand for space technologies and data on the continents, the business opportunities it offers and the necessary regulatory environment in the various countries.

The 2020 edition of the Africa Space Industry Annual Report is available here.