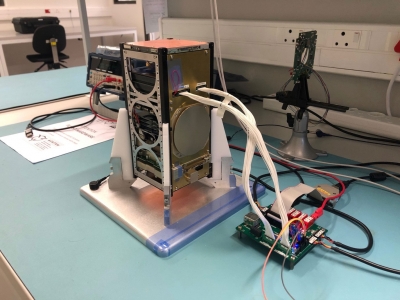 CPUT is expected to launch the first South African mini-constellation of three satellites for Maritime Domain Awareness (MDASat-1) towards the end of 2021.

This mission, named MDASat-1, will use Automatic Identification System (AIS) data to monitor the waters off South Africa’s coast for shipping movements within our Exclusive Economic Zone (EEZ).  AIS is a radio system used for the tracking of maritime traffic, primarily for collision avoidance.  The location messages received by the satellites from ships on the ocean beneath it is downloaded from the satellite when it passes over the ground station at CPUT.

The data gathered by the mission will typically be used by the South African (SA) government to contribute to the effective management of the SA territorial waters. An important development is that SA will now possess the home-grown capability and know-how to acquire this vital information and will not be solely dependent on foreign companies for this data.

The development of the MDASat-1 mission is well underway, with a team of 12 engineering graduates from the French South African Institute of Technology (F’SATI) at the CPUT programme making excellent progress. Qualification testing of the Engineering Qualification  Model has been completed and the team is currently busy with the assembly of the three flight models. Each satellite carries an improved version of the AIS receiver.

CPUT has already produced two satellites that were launched successfully in 2013 and 2018, respectively named ZACube-1 and ZACube-2. The data from MDASat-1 will augment that already received by ZACube-2.  The university identified Space Science and Technology as one of its strategic Research Focus Areas. Prof Robert van Zyl is the head of the Africa Space Innovation Centre, as well as the local node of F’SATI. The Centre is hosted by F’SATI and its emphasis is on postgraduate research and innovation that relates specifically to nanosatellite technology, and innovation that produces commercially viable nanosatellite communications subsystems that are marketed to the international CubeSat community.

CPUT’s next mission and the most advanced to date will see three nanosatellites placed in orbit for the purpose of Maritime Domain Awareness (MDA), in line with the endeavours of the South African Government’s Operation Phakisa.

Van Zyl says: “MDASat-1 (which will be the country’s first mini-constellation) is a major achievement and milestone for CPUT, South Africa and the continent as a whole, not only providing strategically significant vessel tracking data to the government but also developing skills and advanced technologies.

“I am very proud of the CPUT students and staff who work hard to grow the South African space industry for the good of its people.  We express our appreciation to the Department of Science and Innovation which has funded this wonderful programme since its inception in 2008.”

CPUT, with the continued financial support from the Department of Science and Innovation and its agencies, the South African National Space Agency and the Technology Innovation Agency, has been successful in producing state-of-the-art satellite missions. “With the additional support from the National Research Foundation, we have also produced more than 65 Master’s and Doctoral graduates over the course of a decade,” Van Zyl remarks.