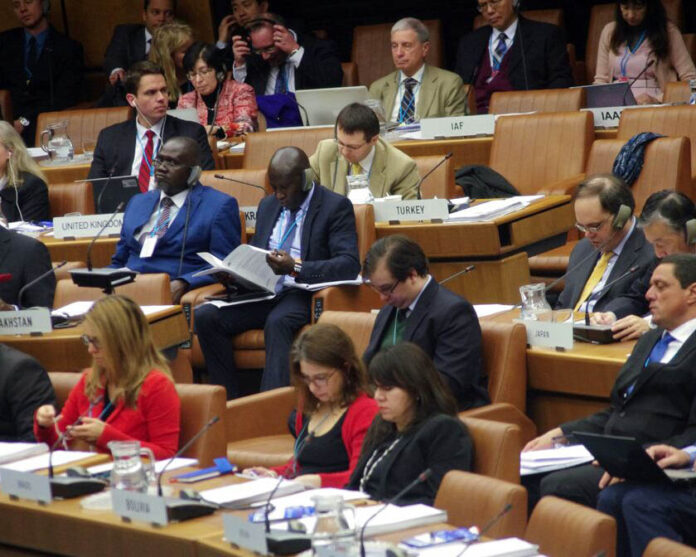 The Committee on Peaceful Uses of Outer Space (COPUOS) has endorsed the landmark “Space2030” Agenda: space as a driver of sustainable development. COPUOS also approved its implementation plan, a comprehensive and strategic document charting how to enhance the contribution of space and its applications to sustainable development and the realisation of other global agendas, namely climate change and disaster risk reduction. This happened during COPUOS’ 64th session, which concluded on Friday.

The “Space2030” Agenda is a milestone document for COPUOS and the international community at large. This is because it contributes to aligning space policies with the Sustainable Development Goals. Furthermore, the Agenda contains valuable tools and global and regional mechanisms, programmes, projects, and platforms that the Member States can benefit from to leverage space technologies, applications, and space-derived data to further economic growth and prosperity. It results from a three-year-long process, following the UNISPACE+50 Conference in 2018  that marked the 50th anniversary of the first United Nations Conference on the Exploration and Peaceful Uses of Outer Space.

The “Space2030” Agenda has a strong focus on partnerships and cooperation among the Member States, United Nations entities, intergovernmental and non-governmental organisations, industry and private sector entities and will also guide the work of the Committee and its subcommittees, supported by the Office for Outer Space Affairs as unique platforms for international cooperation in the exploration and use of outer space for peaceful purposes.

COPUOS will submit the Agenda and Implementation Plan to the General Assembly for adoption at its 76th session this autumn as a forward-looking strategy. This also completes the work of the Working Group on the “Space2030” Agenda of COPUOS under the able leadership of its Bureau comprising the Chair, Mu’ammar Kamel Haddadin, Director General of Royal Jordanian Geographic Center (Jordan), and the Vice-Chairs, Ambassador Alessandro Cortese (Italy) and former COPUOS Chair and cosmonaut Dumitru-Dorin Prunariu (Romania).

“It is a very important and remarkable achievement for the Working Group and for the Committee, which has shown once again its relevance and its unique role as a platform for global cooperation in the peaceful uses of outer space”, the Bureau stated in their concluding remarks.

This year, COPUOS also advanced its agenda on several critical matters, keeping pace with the rapid development and diversification of space activities and their relevance for tackling global challenges, such as on “Space and climate change”, with new initiatives proposed to strengthen the use of space tools to tackle climate change. In addition, COPUOS endorsed the mandate, terms of reference, work plan and methods for the newly established working group on space resources of its Legal Subcommittee. The new Working Group on the Long-term Sustainability of Outer Space Activities of COPUOS Scientific and Technical Subcommittee also met at the session. Several states of the United Nations applied for COPUOS membership, which will be decided by the General Assembly this autumn. They would bring COPUOS membership to a milestone number of 100 States.

Simonetta Di Pippo, Director of UNOOSA, said, “The Office is continuing its efforts to assist states in capacity-building in space science, technology, law and policy, and other initiatives, such as the “Access to Space for All initiative” that also forms an important part of the “Space2030” Agenda, a milestone document and a blueprint for strengthening the use of space tools for sustainable development that highlights the broad societal benefits of Space. We look forward to the Committee’s continuous growing membership and working with our partners to ensure that Space continues to play an important role on the global agenda as a major driver for development on Earth.”

Among other space highlights, COPOUS also marked the 60th anniversary of Yuri Gagarin’s spaceflight. Furthermore, the Committee agreed to propose to the General Assembly that 20 July, be the International Moon Day. The date is the anniversary of the 1969 first human landing on the Moon. The world shall observe the day annually to raise awareness and generate support for sustainable Moon Exploration and Utilisation.