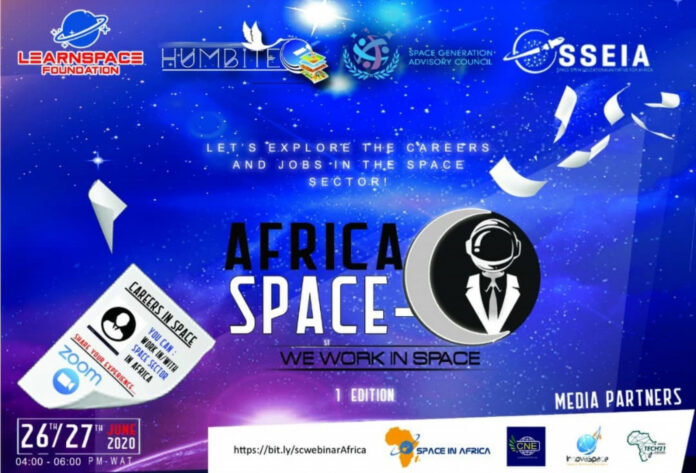 The Africa Space Webinar was a 2-day workshop organised by the Space Generation Advisory Council (SGAC), LearnSPACE Foundation, Humbite, and Space STEM Education Initiative (SSEIA). The webinar is on educating Africans on the benefits of space technology to the African continent and encouraging them to consider careers in the Space sector.

There were four panellists on the first day of the webinar. The program started at 4:02 pm WAT, with the introduction of the panellists which was done by Peter Salvation and Anne. Nelly-Hellen and Anne then moderated the program.

The welcome address was given by Rania, a system and verification engineer in Space Systems, who expressed her happiness to be part of the program. She encouraged participants to “consider working in Space because there are several expertise and capacities in the Space Sector”.

Marco Romero who was the host of the webinar introduced and welcomed the first presenter of the day, Dr James Chibueze; who is an astronomer with great interest in developing human capacities for Astronomy, Space Science and Astrophysics. He gave an explicit presentation on the difference between natural and applied science, stars, galaxy, milky way, and most importantly, career opportunities in Astronomy which involves data scientists, researchers, among others.

Peter Salvation, a data scientist, python expert, a science and tech advocate and the founder of Space STEM Educational Initiative for Africa (SSEIA) gave a presentation on “Why Space?” This presentation session was on the advantages and disadvantages of space and conclusively encouraged the participants to get involved in the Space Field.

Up next, was Mohammed Saibu, a flight control officer in the Mission Control Centre (MCC). He works on the operations of NASA’s future vehicles and the International Space Station. His background and first contact with space were an eye-opener for all. Speaking extensively on the spaceflight disparities between Russia, USA, China, and Africa gave the participants an insight into the necessity of participating in space and contributing to the development of Space in Africa.

The last presenter of the day was Ahmed Baraka, a clinical pharmacist and a space enthusiast. His presentation focuses on the effect of space on the vestibular system, cardiovascular system, musculoskeletal system of the body and the impact of radiation too. He focuses on the interdependence between space and medicine. Most importantly, he listed careers that are possible in the Space medicine field, which involved; Research, Flight Surgeon, Space medicine as a speciality, and Astropharmacy.

There was always a question and answer session at the end of each presentation. At the end of the sessions, Nelly Hellen appreciated the participants and gave a brief insight into what the next day entailed.

On the second day of the webinar, Nelly Hellen introduced all the five presenters of the day by taking the participants through their detailed profiles.

Miss Chidinma Joy Iroka, a Chief Engineer in the Engineering and Space System Division   (ESS)   of the   National   Space   Research and   Development   Agency (NASRDA), spoke about the life of a Space Engineer, its requirements, subsectors and benefits. “Degree in engineering disciplines such as Aerospace, Automotive, Biomedical, Chemical, Civil, Computer, Electrical, Mechanical engineering, etc., can qualify one to be a space engineer”, Miss Joy mentioned during her presentation.

In conclusion, Marco Romero, an Aeronautical engineer, founder and a satellite operator at Angola mission control centre, gave an exciting presentation on Space Education and Outreach. With projects, idea and resources, he revealed how they got to where they are now and how they are progressing towards “Space Education for All”. “Space education can inspire, motivate future generation and help them understand STEM in a fun way” Marco emphasised.

At the end of the 2-day webinar, participants expressed their joy in being part of the webinar. Links were shared for the participants to record their feedback, after which they will receive certificates.

New Report: The African space economy is now worth USD 7 billion and is projected to grow at a 7.3% compound annual growth rate to exceed USD 10 billion by 2024. Read the executive summary of the African Space Industry Report – 2019 Edition to learn more about the industry. You can order the report online.

Experts To Discuss Satellite and IoT Solutions In Africa At The...