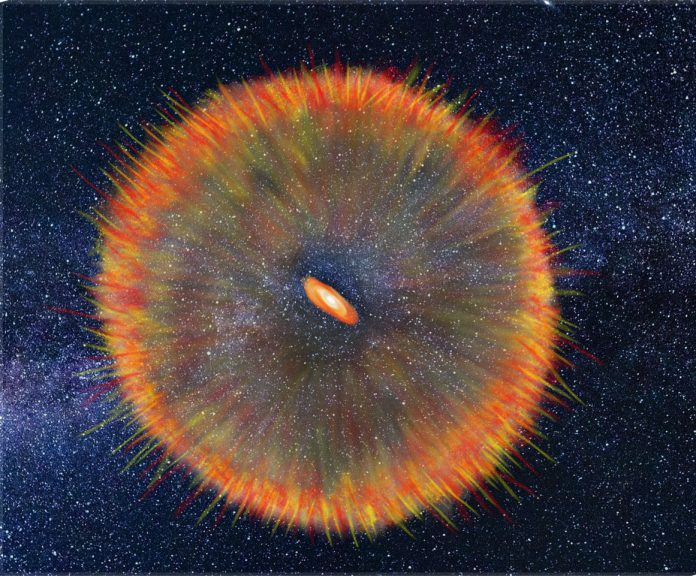 The Milky Way Galaxy contains billions of massive bright stars. These high-mass stars have masses ranging from tens to hundreds of times the mass of the Sun. Their existence plays a role which is paramount in astrophysics.

They end their lives as supernovae which dramatically influences their environment. Yet, how they form still remains a mystery. The best current theories predict an upper limit of only about eight times the mass of the Sun.

For these stars, this leads to a discrepancy between theory and observation, which resulted in several competing theories emerging to explain this. One prominent emerging theory proposes that high-mass stars achieve their final mass from bursts of ‘episodic accretion’ onto the protostar to achieve its final mass.

This theory predicts short-lived, intense accretion bursts through which the protostar gains mass from its surrounding accretion-disk, followed by long periods of inactivity, possibly lasting hundreds to thousands of years. In January 2019, astronomers at Ibaraki University in Japan noticed that one such massive protostar, G358-MM1, showed signs of new activity indicative of a potential accretion burst.

In response, a collaboration of astronomers, the Maser Monitoring Organization (M2O), gathered several radio telescopes from Australia, New Zealand and South Africa (HartRAO) to form a telescope array capable of detecting small-scale emission stimulated by the heat of the accreting protostar.

The team, led by Dr Ross Burns (NAOJ and JIVE), compared multiple images over the span of a month which revealed a “heat-wave” of energy radiating outward from the location of G358-MM1. According to Dr Fanie van den Heever (HartRAO/SARAO, South Africa), the observations made by M2O is the first “real-time” evidence supporting the ‘episodic accretion’ theory for high-mass star formation.

The global community of astronomers, astrophysicists and theoreticians are benefiting tremendously from the work done by M2O and the recent results obtained by this group. The paper was published in Nature Astronomy on Monday, 13 January 2020.

The work is led by Dr Ross Burns in collaboration with other M2O members. Dr Burns is affiliated to the National Astronomical Observatory of Japan (NAOJ) and the Joint Institute for VLBI in Europe (JIVE).

The South African contributors include:

Credit to Katharina Immer, affiliated with JIVE, for the artist’s impression.