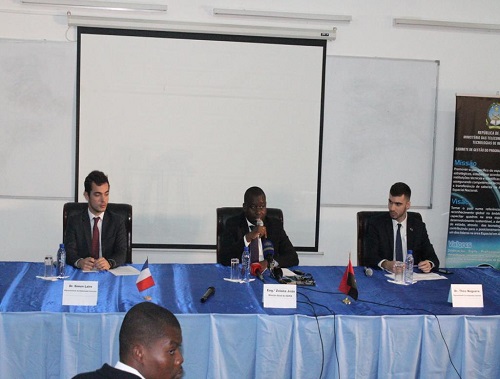 Six technicians from the Angola’s National Space Programme Management Office (GGPEN) are on their way to the city of Toulouse in France, where they will pursue Masters in Space at one of the world’s oldest and most prestigious universities in space science and technology, ISAE-SUPAERO (translated National Higher French Institute of Aeronautics and Space)

This opportunity is the result of a tripartite partnership between Angolan government (via the Ministry of Telecommunications and Information Technologies); Airbus Defence and Space (the prime contractor for the construction of AngoSat-2 and 3 satellites), and Russia, as a part of the agreed compensation for AngoSat-1.

One of the criteria of the selection, which was made by Airbus, is that the young technicians should have at least 3 years of experience working in the space sector. Consequently, Aldair Gonçalves and Hugo Mateus (telecommunications engineers), informatics engineer Bevania Martins, and electrotechnical engineer Massala Nsungani were selected to pursue a Master’s degree in Space Services and Applications. Eldrige de Melo, an information systems Engineer, will pursue a master’s degree in Aerospace Project Management, while the aeronautical engineer, Marco Romero, will study Space Systems Engineering.

According to the director of GGPEN, Zolana João, the training, which will last for 14 to 18 months, will not only provide the Angolan technicians with the academic background, but will also provide them with the much-needed industry experience in space application development and management.

“The technicians will have access to internships at Airbus, which will further facilitate their integration into the space industry upon their return,” said João, in a press conference in Angola.

This training directly supports the transfer of knowledge to Angolan professionals, in line with the nation’s 2019-2022 national space strategic plan.

It is pertinent to note that the cost of the training is borne by Russia in line with the compensation agreement for Angosat-1, at no extra cost for the Angolan government.