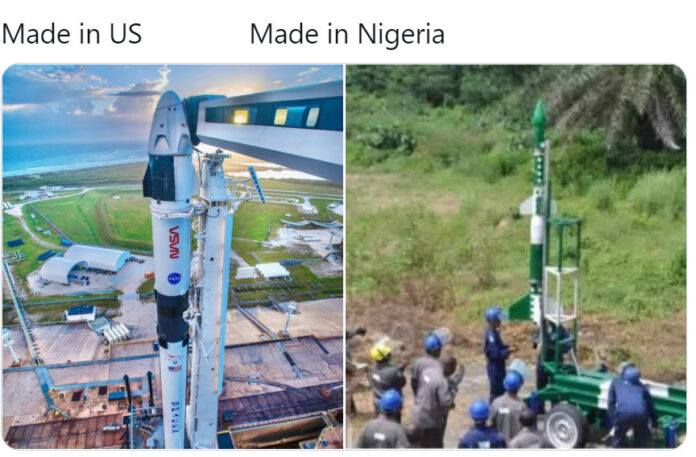 On November 14, 2020, two sets of images appeared on microblogging platform, Twitter, showing two rockets; one, a SpaceX and NASA rocket and the other, a Nigerian rocket. Variations of this tweet have appeared multiple times online since then, some captioning it as “NASA v Chinasa”, “Made in US v Made in Nigeria”, and several other variations intended to poke fun at the Nigerian satellite.

The comparison is not surprising, considering how removed from Nigeria’s space program several Nigerians are. One question that concerned Nigerians like the journalist, Mayowa Tijani have asked is if the picture is of a Nigerian rocket and if the location, another cause for concern is as projected in the image. To both questions; yes, the satellite is real, and the site is equally valid. But what many Nigerians do not understand is why this is so.

In 2005, Nigeria’s Federal Executive Council (FEC) approved a 25-year roadmap for Nigeria’s National Space Programme. The goal of the roadmap was that by 2030, the Center for Space Transport and Propulsion (CSTP) should be able to bring about a noteworthy increase in the Nation’s potentiality in rocket technology, propulsion system as well as a fully functional launch site. The Centre is strategically situated along the Lagos lagoon in Epe, within the Lagos State University Engineering campus to conform to the environmental guidelines regarding a launch site. Launch sites are not located within a metropolis to avoid accidents from failed tests.

CSTP is a division of the National Space Research and Development Agency (NASRDA), Nigeria’s space agency, and is managed by Nigerian scientists and engineers. As one of the six operational centres of NASRDA, CSTP manages essential research and development in propulsion systems, space transport vehicles and also the ability to launch satellites into space. Before any country can make launches such as the one seen in the NASA image, such a country must have a rocket launch site, and not a rocket testing facility.

What is a Rocket Launch Site?

A rocket launch site is any station from which rockets are launched into space. It may sometimes seat more than one launchpad. It is also a suitable facility to mount a transportable launch pad. An extensive safety area typically surrounds it, often called a rocket range or missile range. Tracking stations are sometimes located in the field to assess the progress of the launches.

A rocket engine test facility, on the other hand, is a site where the rocket engines get tested in a highly controlled environment. A ground test program is generally required before the engine is approved for flight. Unlike a launch site, a testing facility can only make short launches to test rockets before they are launched from fully functional launch sites into space. Therefore, the Nigerian rocket is an engine being tested in a testing site, and not a fully developed rocket, ready for launch.

Since the start of the Nigerian program, CSTP has launched over thirty experimental rockets which are used to measure the on-board instrumentation and structural wholeness of those rockets.

Despite eleven African countries launching 38 satellites, none of these launches has been made from an African launch site. Simply speaking, no African country has a fully functional launch site at the moment. Although two African agencies; Nigeria’s NASRDA CSTP and University of KwaZulu-Natal (UKZN), South Africa are currently working on developing and improving the missile and propulsion system in hopes of running a launch site soon.

This then begs the question; why has no African country developed a rocket launching facility?

A brief history on launch sites in Africa

Between 1947 to 1990, eight rocket launch sites were established across Africa, built by different colonial administrations for their use. Some of them made some significant launches while some could not. Two hundred seventy-eight rockets were launched between this time frame, although most of them failed to reach orbit.

The future of rocket launching in Nigeria

Nigeria is continually working towards a boisterous future in the space industry. This is commendable as continuous investment in the space industry will have a significant impact on the socio-economic development of Nigeria. There are, however, significant political, social, technical, and economic challenges to overcome if Nigeria is to develop a thriving space program. Important for Nigeria and the world is viewing these challenges, not as hurdles, but growth opportunities.

While Nigeria’s strategy documents and policies continue to work towards a targeted 2030 creation of a fully functional rocket launch site, Nigeria continues to make several deals, especially with China, towards building, developing and launching rockets from Chinese launch sites. Building on these partnerships, Nigeria is also entering into collaborative programs to see Nigerian engineers being trained by professionals across the world, to ensure that Nigeria’s space program is not only one of the best in Africa, but will invariably become a global competitor.

Conclusively, the viral images are from a testing site –one of the few testing sites in Africa, in fact–  and not a launch site. The image does not present a whole picture, as the Nigerian rocket is a test rocket as opposed to NASA’s fully functional rocket on its way to the International Space Station from its launch site.