Algeria’s Blida Rocketry, founded in 2017 by students and teachers of the Institute of Aeronautics and Space Studies at the University of Saad Dahleb Blida, is one of the leading student groups in Algeria with the skill and knowledge to design, manufacture and test high power rockets of different types and categories.

The university team has developed three rockets with the first one produced in 2017 and dubbed Speedy Aero, a supersonic rocket made from composite materials and designed to reach a maximum apogee of 22K feet. The second, developed in 2018 and dubbed Silver Hawk, was designed to target multiple apogees due to its unique structure.

The Blida team designed and manufactured their most advanced rocket last year, and named it the Space Runner with the capacity to carry up to 7kg of payload to more than 30k feet apogees. Space Runner is a multistage rocket and the first to be wholly designed and manufactured in-house by students and staff at the Institute of Aeronautics and Space Studies. The rocket has advanced avionics, orientation data collectors and active braking systems for altitude control and recovery process. The team initially planned to launch the Space Runner rocket this year during the Spaceport America Challenge but will be doing so next year following the postponement of the challenge due to the pandemic.

Originally from Constantine, East of Algeria, Ramzi is a 22-year-old 1st year master’s degree Student with an aeronautics major at the University of Blida. He has professional interests in aeronautics, environment and space entrepreneurship and innovation.

How would you describe Blida Rocketry and your ongoing rocket program?

Mohamed RAMZI: We are designing and manufacturing high power rockets and participating in national and global rocket challenges without launching them. In 2018, we did the same and improved our skills and built another rocket, also without launching it. In 2019, I was appointed the Project Manager, and with our new rocket, we took second place in the Algerian Rocketry Challenge after two successive years being in the third place. We got accepted in the Spaceport America Cup in the United States, which is going to be the first time an Algerian team is going to compete there. It’s an honour for us. This year, we were the only African team selected alongside two other Algerian teams. The Spaceport America Cup is likely the biggest inter-college rocket contest in the world. The Spaceport America Cup is the world’s largest intercollegiate rocket engineering competition this summer. Unfortunately, the Cup is now postponed to next year due to the current pandemic.

Can you talk a little bit about the Algerian Rocketry Challenge? Is that funded by the government, what are the prizes and how long have they been running the challenge?

The Algeria Rocketry Challenge was created in 2017 and has been held for three years at the University of Blida. The idea emerged a year earlier, led by Abdelkader Kherrat, an Algerian who participated in the Spaceport America Cup with his team at the University of Montreal in Canada and decided to replicate the model in Algeria. He came with the idea and proposed it to the Institute of Aeronautics and Space Studies University of Blida, and in 2017 they had the first challenge where the Blida Rocketry team got third place and won the prize for the best design and manufacturing. The challenge is usually held at the University of Blida, and the university’s Institute of Aeronautics and Space Studies is the main organizer. A commercial company sponsors the challenge and provides monetary prizes to the top three teams.

How has Blida Rocketry progressed in the national challenge since 2017?

When the team participated in 2017, I was not a member, but I had two of my friends that were members of that team. Our team was created after the idea forebear, who is now in Canada pitched the idea and the Institute of Aeronautics and Space Studies’ headmaster PR Amina Benkhedda assigned a teacher, Dr Hocine Bentrad, to set up the team and get students involved in it. In the beginning, the team had about six members, and in 2018 when I joined, we were about 13 members. In 2018, we participated again in the challenge and maintained third place. We were a little bit disappointed because it was the second time we got third place.

In 2019, I was promoted to be the Project Manager, and I became involved in a lot of activities. I report and manage our relationship with partners and the Institute. We have a lot of partners and associates who help us with funding. However, the Institute of Aeronautics and Space Studies provides the majority of the funds alongside some big companies in Algeria.

I launched the Aerocampus Junior, a full rocket and aerospace program dedicated to kids aged between 8 to 16 years old, and the AeroTalks series to bring expert knowledge closer to Algerian youths.

What milestone(s) has Blida Rocket achieved so far?

Generally, the team has been improving yearly. We increased from six to 13 members in 2018 and 22 in 2019. We have progressed in terms of the quality of the team working to help us build the rockets. Some members are working on the management, and others are working on the technical side, such as building the recovery system or the avionics. We have been designing and manufacturing high-power rockets but have not launched any of them. We were one step closer to launching the last rocket while also preparing for the Spaceport America Cup challenge before Covid19 emerged and disrupted everything. We have postponed everything to next year.

I understand you are designing and manufacturing the rockets at the moment, what other technical details are you working on, and what kind of capabilities are you looking to achieve?

There are a lot of things going on on our end, and we have been improving year on year. In 2019, we tested new technologies while dealing with the most significant challenge that every African team has, which is sourcing materials and hardware for the rockets. We use lots of local materials and import some of the electronic components from foreign countries, mainly China and Europe. We managed to pass through the long process of securing these components from abroad because there are lots of hardware electronic components and sensors that are not available in the Algerian market.

Bilda Rocketry was created primarily to participate in the national rocketry challenge and inspire young Algerians to design and develop rockets. The objective has improved over the last three years. In 2019, we started developing the process to launch a test rocket from Algeria. It is a long process, and it is still a new development in Algeria and Africa, generally.

How would you describe Algeria’s rocket sector? Are there other partners or competitors working on rocket projects?

It is not only the University of Blida team that participates in the Algerian Rocketry Challenge. Last year, about 11 universities participated in the challenge, which is the highest number recorded so far. There are lots of efforts going on and all together working to improve the conditions to enable the university teams to succeed in their research and possibly launch the rockets in the near future.

We have an educational program called the Aerocampus Junior, a full rocket and aerospace program dedicated to kids aged between 8 to 16 years old. We conduct rocket and aeroplane workshops for the kids and inspire them to be part of the space field in their career.

During this pandemic, we started an online talk show called AeroTalks, which is the first of its kind in Algeria. The talk show covers space-related subjects. Alongside my colleague Mohamed El Mehdi Noui, we have moderated 13 episodes starting from July 3 till August 7. We have managed to have over 10 thousand viewers between July 3 to August 7. We started the second phase last weekend with two panellists, and we plan to have two panels weekly – on Saturday and Sunday – covering essential topics for the next aerospace generation in Algeria and globally. The goal is to have more young people involved in the aerospace industry as well as the technologies and the advancement in the aerospace sector and how we can be strategic in the sector. We have had many experts from Algeria, Africa, Europe, North America and South America serve as panellists on AeroTalks.

What long term goal are you looking to achieve beyond the Spaceport America Cup?

We plan to conduct more space activities and outreach to help students get more involved. Our long term objectives are a lot, but mainly, we shall be focusing on getting more young people engaged with space projects as well as improving the quality of our research and development facilities. We are building an ecosystem that would be able to support space startups in different segments of the industry in Algeria in the long term. In the short term, we plan to make a mark in the Spaceport America Cup and prove to everyone that an Algerian team can design and build high-power rockets.

What do you think is unique to your rocket project and what added value or advantage are you working on?

Currently, we are at the beginner level, and we are trying to improve year by year. A lot is going on, and we are building capacity in the airframe, payload, recovery system as well as embedded electronics within the rocket. We are improving and getting more people involved. Our goal is to have IP components when we have improved our R&D facilities.

Another vital point, in the long run, is getting more partners to work with us and potentially reduce the cost of securing materials and components. Having many partners helped us to get up to this point, and we believe it will help us in reducing the cost going forward. 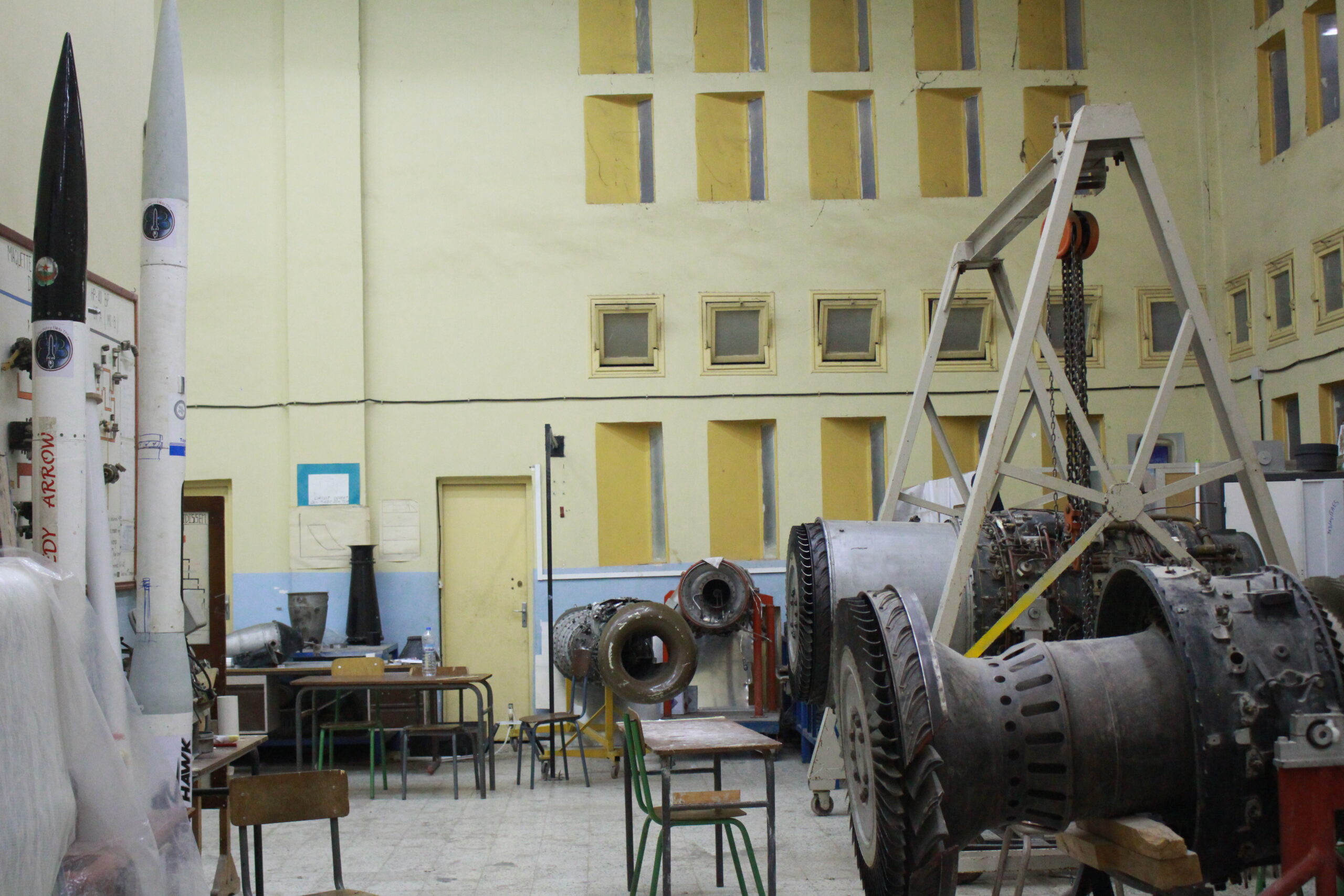 Do you have the facilities in Algeria to launch your first test rocket whenever you’re ready?

The condition for test launches by civilians is similar to what we have in many African countries where government agencies and the military manage these facilities. We are working on having our first test rocket launch by next year.