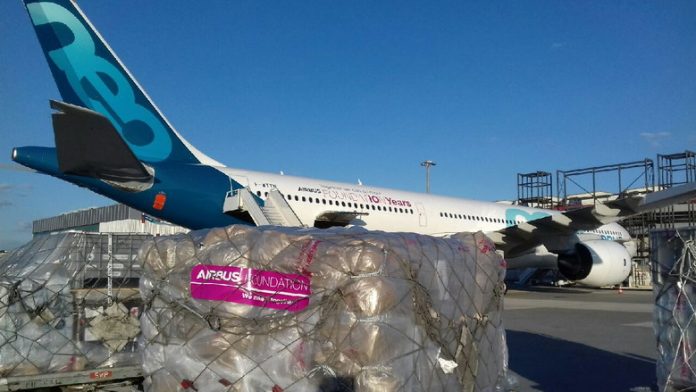 The Airbus Foundation and the International Federation of Red Cross and Red Crescent Societies (IRFC) have sent 26 tonnes of emergency goods from Geneva, Switzerland, to Maputo, Mozambique, using an Airbus A330neo test aircraft.

The relief equipment, provided by the Swiss Red Cross and the Swiss Agency for Development and Cooperation, consists of water, sanitation and hygiene equipment as well as shelters. The goods will be transported to Beira, Mozambique, taking much needed relief to the survivors of cyclone Idai, Airbus said on 27 March.

“We are very saddened by the devastation and losses caused by the cyclone Idai and stand with the people of Mozambique during these incredibly difficult times,” said Guillaume Faury, President Airbus Commercial Aircraft and member of the Airbus Foundation Board of Directors. “Providing humanitarian support in the delivery of critical assistance is at the core of the Airbus Foundation’s mission and we hope that our contribution helps in bringing faster relief to the affected families and communities.”

The aircraft departed from Geneva on the evening of 25 March and landed at Maputo International Airport on the morning of 26 March. The relief items will be distributed through the Mozambican Red Cross supported by IFRC relief teams on the ground.

An estimated 483,000 people have been displaced in central Mozambique by cyclone Idai. The cyclone made landfall on the evening of 14/15 March near the city of Beira, Mozambique’s fourth largest city with a population of over 500,000. Aid workers are worried about the health risks with pools of stagnant water that could become perfect breeding grounds for mosquitoes.