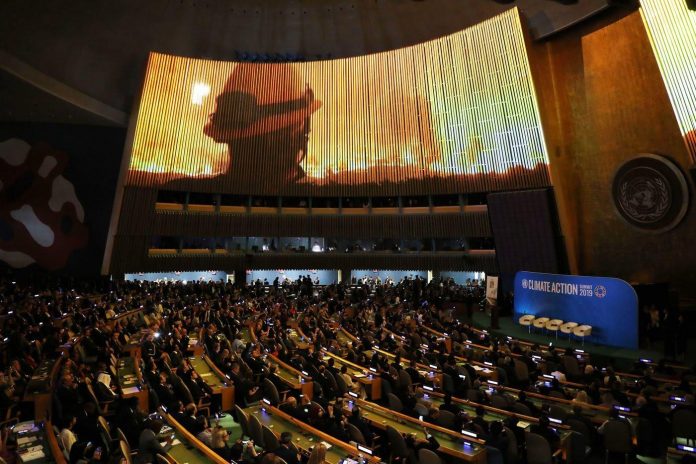 Global emissions are reaching an all-time high and show no signs of plunging. The last decade has been the hottest with temperatures increasing significantly since 1990. There is a constant rise in the sea levels, marine life is plummeting and droughts are becoming aggressively alarming. We are beginning to experience the full-blown rage of climate change, and no one is spared.

Africa accounts for less than 4% of the world’s carbon dioxide emissions, but is one of the most affected regions and also among the most vulnerable in terms of possessing the necessary facilities to safeguard the continent against extreme conditions. Even with external support, building climate resilience in Africa will take significant political will and resources, as well as support from populations that understand the need to prioritize climate action. It is with this consciousness that African leaders called on the General Assembly during the Climate Summit in New York on Monday, to declare a climate emergency after a series of cyclones and droughts. Declaring a climate emergency enables the adoption of certain actions at a global level, said James Murombedzi, head of the African Climate Policy Centre, a joint African and UN initiative.

In a survey conducted by Afrobarometer, some of the most severely affected countries, including Uganda, Malawi and Cabo Verde, substantial majorities of the population were familiar with the term “climate change.” Overall, nearly 6 in 10 Africans had at least heard of the term. Whereas, in other countries, awareness of climate change was much less widespread. These include some of the continent’s largest populations, such as Nigeria, where only 50% of respondents said they knew about climate change, and South Africa (41%). Groups less familiar with the concept of climate change included rural residents, women, the poor, the less-educated, people who work in agriculture and those with limited exposure to the news media. The survey did indicate that only a small amount of the African population was “climate change literate”, and that getting people to be aware of climate change and the challenges it poses is key.

Scientists expect that large parts of Africa will witness more food insecurity and unpredictable rainfall due to climate change and this has placed a limitation on the attainment of global Sustainable Development Goals (SDGs), particularly ending hunger and poverty by 2030 as the African economy is constantly and fiercely being plagued by climate change.

Although some African countries have been able to monitor weather anomalies by employing earth observation satellites and improving remote sensing activities. Some African states also lend their technology to surrounding countries. But the region still has a lot to achieve in developing the necessary infrastructure to combat climate change. African leaders are now seeking ways to raise money to develop effective monitoring and forecasting of weather and seasonal climate trends as such as floods, storms and droughts that ravage homes, livelihoods, food crops and properties across the continent. Different parts of Africa continue to face the harsh realities of climate change, Cyclones Idai and Kenneth killed hundreds in Mozambique, Kenya and Somalia are suffering from drought after a major cyclone occurrence, Zimbabwe and Malawi have also had their fair share of climate change backlash.

The UN is taking conscious steps to make communities safer from climate change by providing insurance, early warning and investments in small scale farmers. In a statement issued during the climate change summit held at the United Nations Headquarters in New York from September 21 – 2, “Climate change could push more than 100 million people in developing countries below the poverty line by 2030”.

According to the general assembly, the climate action summit will showcase new initiatives by government, business and civil society to increase their commitments to achieve the goals of the Paris Agreement and work toward reducing emissions to essentially zero by mid-century.

Most African countries have signed on to international climate agreements, including the 2016 Paris Climate Accord, which spells out a commitment from developed countries to allocate $100 billion by 2020 for climate adaptation and the mitigation needs of developing countries.

Announcements were made during the summit to cut down Green House Gases with cooling and energy efficiency.

Many citizens are seeing harmful changes in weather patterns, but fewer than 3 in 10 have a basic understanding of climate change. Given the continent’s low greenhouse gas emissions and high vulnerability to climate change, consensus-building initiatives for prevention, early-warning, adaptation and mitigation measures were some of the important contributions that African nations took to the U.N. Climate Action Summit in New York.