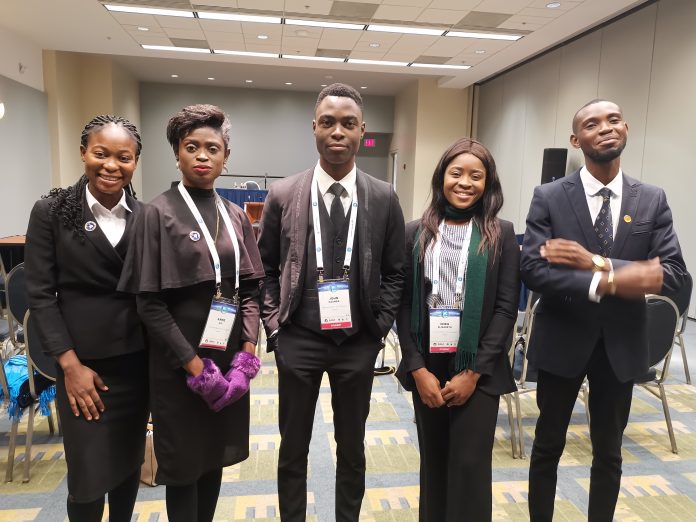 The team representing Africa at the ongoing International Astronautical Congress Moot Court competition has defeated their North American counterpart in the semi-final of the 2019 Manfred Lachs Space Law Competition. The competition was held at a side event of the ongoing conference where they argued a case concerning military uses of space resources.

Representing Africa were students from the International Law Students Association (ILSA) of the University of Calabar, Nigeria; Ebruka Nelly-Helen Neji, and Ushie Augustine Eneji. At the Semi-Finals, they competed against the McGill University team which represented the North America region. The other Semi-Finals spot featured Europe and North America. The judges were Leslie I. Tennen, Ranjana Kaul, Marco Ferrazani.

The case Suniza v Azasi concerns the use of space resources for military purposes. Additional issues are presented regarding the use of abandoned lunar facilities and liability for damages resulting from an explosion on the Moon. The parties have agreed to submit their dispute to the International Court of Justice for resolution.

Annually, the European Center for Space Law (ECSL) and the International Institute of Space Law (IISL) organizes the Manfred Lachs Space Law Moot Court Competition, with over 60 teams participating. The Africa Regional Round was hosted in Pretoria, South Africa by the Department of Trade and Industry, where 9 universities from three countries in Africa participated and the University of Calabar took the first position.

The aims of the Manfred Lachs Space Law Moot Court Competition is to promote the interest, involvement and knowledge of space law among students by providing a fair and competitive environment for the exchange of thoughts and the deepening of understanding of space law.  This competition encourages further development on the subject matter of space law in the curriculum of academic institutions and assists participating countries in developing technical legal capacity by preparing the next generation of space lawyers.  The Competition is a platform for the students to put the analytical, drafting, presentation and arguing skills of an upcoming lawyer to the test.

Since its inception by the IISL in 1992, the Competition has grown to cover four world regions: North America, Europe, Asia Pacific and Africa (added in 2012); and for the first time since joining in 2012, Africa won the Lachs moot world finals in 2018.

The team will now compete against Europe at the Finals on Thursday.