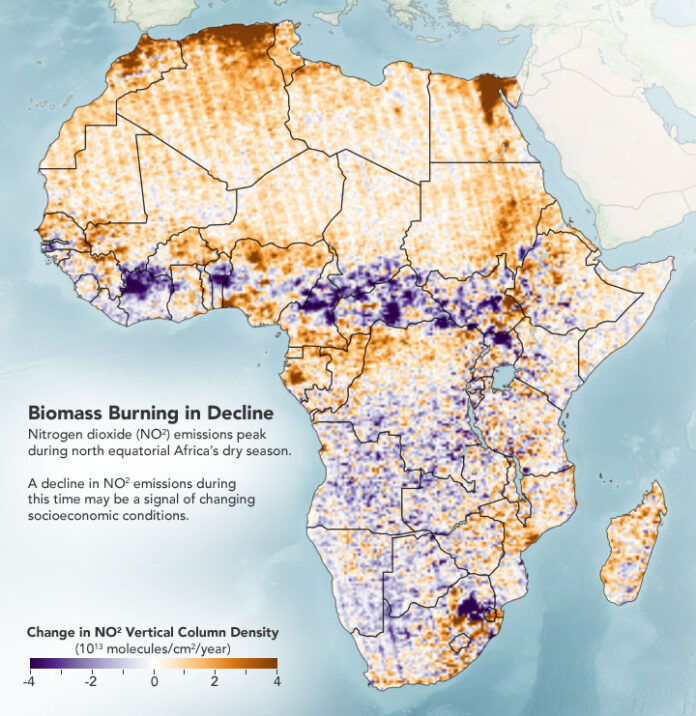 Six researchers from the United States, France and Côte d’Ivoire have published a report showing a small but unexpected decrease in air pollution over some parts of Africa in recent years resulting in improved air quality.

The research is titled: “Reductions in NO2 burden over north equatorial Africa from decline in biomass burning despite growing fossil fuel use, 2005 to 2017″. It was published in the Proceedings of the National Academy of Sciences of the United States of America (PNAS).

The lead author was Jonathan Hickman, a postdoctoral fellow at the National Aeronautics and Space Administration (NASA) Goddard Institute for Space Studies (GISS).

They found that nitrogen dioxide (NO2) concentrations over the northern grassland region of sub-Saharan Africa dropped by 4.5% during the dry season (November through February).

NO2 is released as a byproduct of burning fossil fuels for electricity or transportation, from burning vegetation like grasslands or crops; and by the activity of soil microbes. The gas can cause or aggravate respiratory illnesses in humans and increase airborne particulates and ozone formation close to the Earth’s surface.

According to the research, air pollution reduction is most evident during the dry season in areas where grassland fires traditionally occur. The small seasonal decrease may not be enough to offset increasing human-caused air pollution in the long term, but it does show an interesting shift in the region.

“The traditional paradigm is that as middle and low-income countries grow, you often see more emissions, and to see a different kind of trajectory is very interesting”, Hickman said. “It’s nice to see a decline occurring when you’d expect to see pollution increasing”.

They used NASA’s Aura satellites to collect data that show changes in NO2 concentrations over Africa during November through February between 2005 to 2017.

Though the pollution decrease around equatorial Africa was small, it was unexpected because economies and urbanization have been growing in the region, fossil fuel consumption. The scientists attributed the change to a decrease in wildfires and controlled burns in grasslands during the dry season. The total area of savanna burned in sub-Saharan Africa is getting smaller each year. More people move into densely populated cities and towns and as farming techniques and agricultural land-use changes.

“This positive trend may continue only to a point”, Hickman cautions. “Eventually, there may be a net worsening of air quality as pollution from fossil fuel burning surpasses the seasonal decline in fires”.

Last year, NASA announced a partnership with the epidemiologists and researchers at the University of Pretoria to assess air pollution and its attendant respiratory diseases using space data.